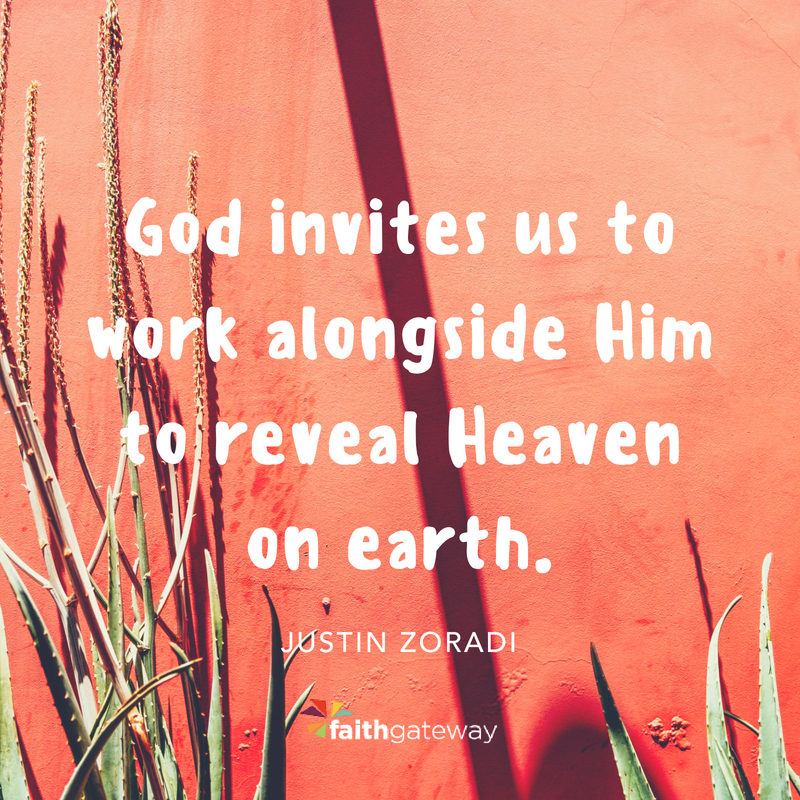 Christ is always with us, always asking for room in our hearts. ~ Dorothy Day

Harvey and Lois Seifert wrote a tiny book called Liberation of Life, much of it devoted to the idea of finding the balance between loving God and loving our neighbor. They describe this balance as a bird soaring on the wings of spiritual devotion and social action simultaneously.

An ancient saying suggested that there are two wings by which we rise, one being personal piety and the other community charity. No one can fly by flapping only one wing. It is impossible to be sincere in our worship of God without expecting to do the will of God. It is equally impossible to do the full will of God without the guidance and empowerment of a vital personal relationship with God.1

If we’re to find the ecstatic heights of devotional life, it can only be achieved by acting for the pragmatic benefit of others. If we’re to join God to work for the least of these, it can only be sustained through the careful diligence of faith and personal piety. Discovering this delicate balance is the ultimate goal.

While living in Belfast in my early twenties, trying to find social and spiritual balance resulted in one of the most profound spiritual experiences of my life. God had been particularly silent, and I was quite lonely at the time when I signed up for an intercessory prayer session with a local pastor at a nearby Presbyterian church. Pastor Derek was recommended by a friend as someone who could perhaps give me some insight into my direction in life, my “calling,” and how to find God in dark times. To be honest, I’m not really the type to volunteer myself for these types of meetings. Whether it’s pride or awkwardness or both, the thought of a stranger telling me what to do with my life makes my defenses go up. But God has a funny way of moving in the world, and oftentimes the most uncomfortable path is the exact one to choose.

I met Pastor Derek in his office. He was like a grandfather figure, wonderfully kind, and I felt comfortable immediately. I sat on a couch, and he pulled up a chair next to me and asked if he could put his hand over my heart. This is where it started to get weird. Derek sat in silence for a moment, asked God to speak to me through him, and then blew the roof off the place. He whispered,

Justin, I see you walking into a big room, and you’re carrying all these boxes. You have them stacked on top of each other, a few balancing in each hand, and labeled on each box are different phrases like community, social justice, hope, and compassion. And Jesus is there, and he’s standing in front of you with a big smile on His face.

Justin, Jesus wants me to tell you that He is so very proud of you. You are carrying the things He cares most about, the things that are closest to His heart, but for right now, He needs you to put down those boxes so He can give you a hug.

By this time I’m leaning my head back on the couch as tears roll down my cheeks. It was all so piercingly accurate, exactly what I wanted and didn’t want to hear at the same time. I’d never met Derek before, and he knew nothing about me or what I was even doing in Northern Ireland. Yet this was the most true and honest thing anyone had ever said to me. It was from God.

Derek’s words struck right in the pit of my soul and had me reflecting on all the times I had been working for God but not actually with God — the times I had done things in His name but never actually invited Him into it. I had been putting so much pressure on myself to complete God’s work that I had begun to neglect God in the process. The work had become an idol. Even worse, I was embarrassed for all the times I had prayed for God to bless the things I was up to but didn’t stop to simply ask if I could join in what He was already doing.

As Henri Nouwen writes, “The way of Jesus can only be walked with Jesus. If I want to do it alone, it becomes a form of inverse heroism as fickle as heroism itself.”2

Derek got up while I sniffled a bit more on the couch and blew my nose into the sleeve of my sweatshirt. He checked email on his office computer while I sat and stared out the window. A few minutes passed, and then it was over. I got up and shook his hand. Derek winked affectionately, and I walked out into the blustery Belfast street. I never saw him again.

Learning how to find social and spiritual balance has been one of the greatest challenges of my adult life. In moments of pain and uncertainty, my relationship with Christ becomes paramount, prioritized above the rest. But in times of ease and rest, it’s remarkable how quickly it can fade away. I’m sure you can attest to this struggle as well. One secret I’ve found is embodying a spirit of gratefulness in all things. If I’m attending a graduation ceremony for our university graduates in East Africa, I give thanks that it’s God’s doing, not mine. And when I’m pinned to the bed in agony, with fear and anxiety ripping at my chest, I’m grateful God has given me the opportunity to work alongside Him despite the pain.

While describing the spiritual battles in building These Numbers Have Faces, my friend Sam once said to me, “You can’t build the kingdom without the King.” How right he is. As it says in the Psalms, unless the Lord builds the house, the workers labor in vain. Searching the depths of our spiritual lives reveals all the darkness we’ve tried to hide, but it’s the only way to answer the invitation to join in God’s redemption of humanity.

As much as we may try to deny it, we humans are God’s secret weapon. We’re the least credible allies, woefully unprepared and prone to fear, desertion, and trite insecurities. But God chooses us anyway. If God were to perform a cost-benefit analysis, he’d see the human population as a huge liability. But logic would be counterintuitive to the revolutionary and tactical dynamic of the kingdom itself.

God invites us to work alongside Him to reveal Heaven on earth.

Working for God but not actually with God… Does that sound familiar to you? It’s so easy to slip into the zone of doing for God instead of being with Him. What does Jesus want you to put down today in order to be hugged by Him? Come share with us on our blog. We want to hear from you! ~ Devotionals Daily