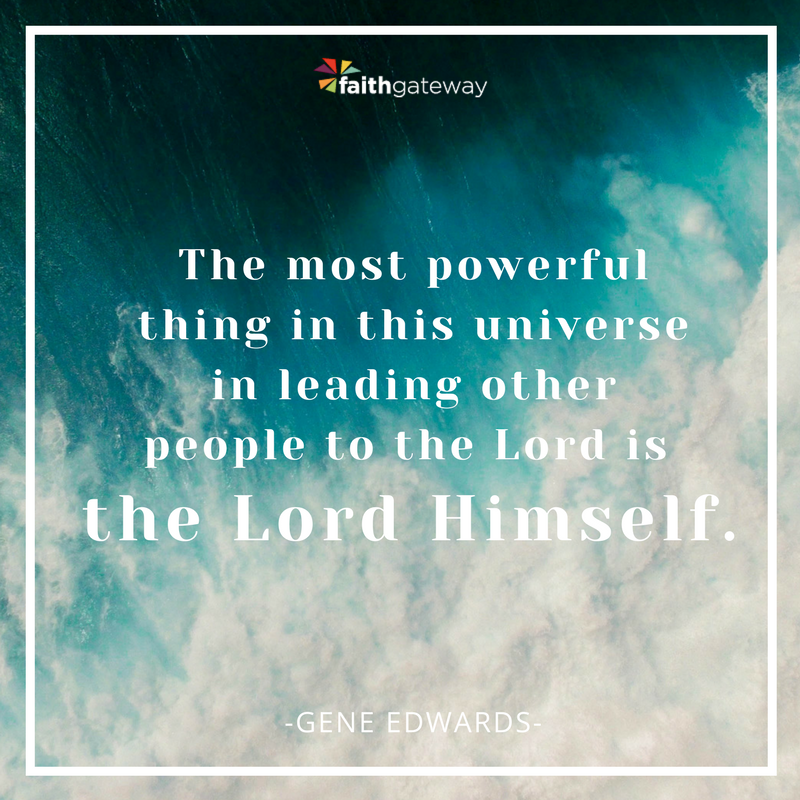 His name is Hubert Mitchell. He was without question one of the most awesome and formidable men I will ever know. The day I met him, the two things that stood out the most were his booming voice and the fact that he had no inhibitions.

Hubert was a missionary whose calling was to places where no one had ever heard of the gospel, and further, to go into the depths of the worst jungles on the earth and preach to tribes that did not even know there was a God. He went to the wild Kubu tribe in Sumatra when it was almost impossible to get to that isolated and forsaken island.

Some of the stories Hubert told defied belief, but my purpose for meeting him had nothing to do with his work as a missionary. His reputation, as far as I knew, lay in the fact that he was known to be one of the most effective personal soul winners.

I met Hubert when he was old. In Hubert’s declining years, he had moved out of the jungles of Sumatra to the jungle of downtown Chicago. Hubert met with groups of businessmen once a week in Chicago’s Loop and set up an incredible witness to those men. It was a gathering of some of the most influential men in Chicago. Hubert treated that area as if it were the center of a country village and he a country pastor.

I flew from Texas to Chicago to meet Hubert. I was a young man looking for anyone who could teach me an effective way to speak to others about Christ. Up until then I did not know how to lead others to Christ — nor did anyone else I knew.

Hubert met me at O’Hare Airport. He had agreed to take me with him as he went door-to-door. (I did not know what “door-to-door” meant to this man!)

Hubert parked his car downtown when we left the airport and asked, “Do you want to start right now?”

He looked at the dozen skyscrapers which surrounded us on every side. After a moment he announced, “I have never been in this one.”

Hubert had picked one of the tallest buildings I had ever seen. To my chagrin, when we entered the elevator, Hubert pressed the button to the highest floor. The elevator door opened to the receptionist of the president and owner of said skyscraper.

“Good evening. I am a Christian minister, and I meet each week with men who work in the Loop. I would like to have a word of prayer with the president.”

The receptionist and I were tied as to which of us was more dumbfounded. Still startled, she pressed a button on the phone and said, “Sir, there is a man here who wants to pray with you.”

The reply from the intercom was instant! “Send him in.”

Bold as brass, Hubert started around the desk of the receptionist, who caught up with Hubert and escorted him to the office of the president.

I, in turn, was apoplectic.

As I staggered to a chair, my entire world as a personal evangelist changed forever. About half an hour later, Hubert returned. He thanked the receptionist and turned to me, “He will be with us in our next meeting.”

I was too stupefied to say anything.

Everything I had been taught and read about witnessing died that night. Hubert did not have any particular “way.” He lived with the expectation that the people he spoke to wanted to receive Christ as their Savior. Hubert had only one subject — to talk about Christ.

Then, and even today, I challenged this supposition, but the fact was that my fellow pastors at the time were not doing any better than I had been doing at winning people to Christ.

After witnessing to the gentleman who owned the skyscraper, Hubert drove us to a neighborhood where he would go door-to-door with the expectation that some of the people would invite us into their living rooms.

“My name is Hubert Mitchell and I am a Christian. I would like to come in and have prayer with you and your family.”

Sure enough, they opened the door. We went in and I watched Hubert Mitchell lead a man to Christ.

Hubert always talked about Jesus. He did not quote Scripture; he just kept on the subject of Jesus. You could not get him off the subject of Jesus Christ. From Hubert, I learned one of the most valuable things I have ever learned throughout my entire life. It is not logic nor reasoning; it is not verses of Scripture to put down arguments, for no argument ever came up.

The most powerful thing in this universe in leading other people to the Lord is the Lord Himself.

Today I often quote, “In every man there is a God-shaped vacuum that nothing can fill except Jesus Christ.”

I left Chicago a different man. Back in Texas, I found witnessing to others a delight and a joy. Fellow pastors asked me to come to their churches to help them win others to Christ. Eventually I wrote Here’s How to Win Souls. Soon I was holding county-wide, weeklong meetings for training others in personal evangelism. Then came city-wide campaigns in door-to-door evangelism.

And the genesis of all this: “Good afternoon. My name is Hubert Mitchell. I would like a prayer with the president of your company.”

***One evening Hubert fell to telling me stories of his time as a missionary in the jungles of Sumatra. One of the stories he told was hilarious.

“I was walking along a trail in the jungle when I realized someone was strolling along beside me. I looked down.

It was a tiger! He walked along with me for about a hundred feet and then turned back into the jungle. If he had paused to eat lunch, I would not be here today.”

The next story is one of coincidence… or is it?

Hubert went into the deepest, most unreachable part of Sumatra. He took nothing but an interpreter and a sack slung over his shoulder containing food for the trek. He walked into a village and asked to meet with the chief. The chief listened intently. Hubert came to the point where he said, “And Jesus was nailed to a cross and died for your sins and mine, that we might be forgiven of our sins.”

He ate the rest of the oranges and put the empty can back into his pack. He sat there and stared at a nail that had no business being in Sumatra and certainly not in a can of oranges which had been manufactured in Japan.

The next day Hubert came to the chief. The chief stared at the nail, felt the point on one end, examined the blunt place where men might strike that nail and drive it through a wrist. Now the chief understood how Jesus Christ was nailed to a tree. The chief stood up and asked to receive Christ as Lord.

A few weeks later, having tested the waters of salvation, the chief shared the gospel with his tribe, which until this time had no god, and told them to each and all receive Christ as their Savior because now Jesus Christ was the God of this tribe. It was not unusual for the chief of a tribe, having received the Lord, to tell his entire tribe in turn to receive Christ as their Savior. The tribe would follow their chief in fully believing.

Today there is a jungle tribe in Sumatra which became Christian because of the most extraordinary circumstance.

There are Christian men, heads of large corporations, in the jungle of Chicago, who found Christ because a barrel-chested man with a commanding baritone voice led them to Him.

Hubert also taught a twenty-four-year-old young man how to lead others to Christ. Hubert, may your influence live on for years to come.

Excerpted with permission from Stories I Love to Tell by Gene Edwards, copyright Gene Edwards.

Maybe it seems like it should be more complicated, or we should be more educated, or more spiritual, or more holy, but the meat-and-potatoes of bring someone to faith in Jesus is just to tell them about Him! If we step out believing He will pave the way before us, He’ll do it! Who are you witnessing to right now? Who needs to hear about Jesus? Come share with us on our blog! We want to hear from you! ~ Devotionals Daily