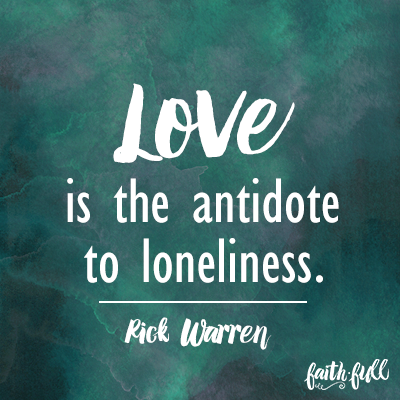 There are both good ways and self-defeating ways to deal with loneliness. One self-defeating way is to become a workaholic. You spend all your time and energy working, working, working. You get up in the morning and work all day until finally you flop into bed exhausted at night. But eventually that takes its toll on you physically and emotionally.

Some people try materialism: they buy everything they can. “If I can just get a lot of things around me, I will be happy.” But things do not satisfy. If you were put on an island and told, “You can have anything you want except human contact,” how long do you think you would be happy? Not very long, because things do not satisfy.

Some people have an extramarital affair because of loneliness. Others turn to alcohol or drugs.

Some people do nothing — they just sit around and hold a pity party.

So what did Paul do? Paul did four things to combat his loneliness, and they are just as appropriate today as they were when he went through his days of loneliness. The four things for getting through those times are utilize, minimize, recognize, and empathize.

The first way to deal with loneliness is to utilize your time wisely. In other words, make the best of your bad situation. Resist the temptation to do nothing. Loneliness has a tendency to paralyze you if you just sit around and do nothing. Resist that — think of a creative way to take advantage of your lack of distractions.

As the saying goes, “If life gives you a lemon, make lemonade.” Whatever you can do to combat loneliness, do it. This is what Paul did:

When you come, bring the cloak that I left with Carpus at Troas, and my scrolls, especially the parchments. — 2 Timothy 4:13

Paul refused to sit around and mope. He did not say, “Poor me, poor me.” He did not complain, “God, is this what I get for thirty years of ministry? Is this my reward for starting lots of churches, for being the person most responsible for the spread of Christianity in the Roman world? Is this what I get — to die in loneliness in a damp prison in Rome?”

No pity party for Paul! Instead, he said, “If I am going to be lonely, I may as well be comfortable. I am going to make the best of a bad situation. Bring my coat so at least I will be warm.”

Often lonely people do not take care of themselves. They do not eat right, they do not exercise, and they ignore their personal needs. But Paul said, “Bring my coat and my books, and I will capitalize on this lack of interruption; I will use it for writing and study time.” This was a great change of gears for Paul, because he was an activist, a church planter. More than anything else, he wanted to be in the Colosseum preaching instead of in a prison studying. But sometimes God can use loneliness for good.

If Paul had been in the Colosseum, he would have been preaching, but God left him in prison and we got part of the New Testament instead!

Probably the only way that God could get Paul to sit still was to put him in prison. And Paul’s response was, “If I cannot be where the action is, I will create action right here.”

The second way to deal with loneliness is to minimize the hurt. Play down the loneliness. Do not exaggerate it or rehearse it over and over. Do not allow the loneliness to make you bitter, and do not allow resentment to build up in your life. Paul said,

Paul had much time on his hands, but one thing he didn’t have any time for was to become resentful. He knew that resentment would only make him lonelier and build a wall around his life.

Resentment locks us in a self-imposed prison and drives people away, because nobody likes to be around a cynic — a person who is always bitter and complaining. [tweet this]

Paul said, “I want to be a better person, not a bitter person, so I will utilize my time and minimize my hurt.”

The third way to deal with loneliness is to recognize God’s presence. Paul said,

Where is God when you are lonely? He is right next to you. Jesus said,

“I will not leave you comfortless” (KJV).

There is no place where God is not. He is everywhere at all times, and you can constantly talk with Him. As long as you understand this, you are never really alone. Prayer is a fantastic tool that you can use in lonely times. Talk to God, and let Him speak to you. David learned that fellowship with God is a tremendous antidote to loneliness.

He would cry out,

David learned that loneliness is a signal that it is time for us to become better acquainted with God.

Singer Amy Grant recorded a great song that goes, “I love a lonely day. It makes me think of You… It chases me to You. It clears my heart.” In effect, she is saying, “It gives me a chance to really focus on You, God.”

So what should you do? Do what Paul did. Don’t mope around; don’t give in to the temptation to do nothing. Focus on God. Make your time count.

That is what Paul did. His whole goal in life was an outgoing ministry — serving others without focusing on himself. As he said,

The Lord stood at my side and gave me strength, so that through me the message might be fully proclaimed and all the Gentiles might hear it. — 2 Timothy 4:17

Paul was lonely and at the end of his life, yet he never forgot his life’s goal: to help other people.

When Corrie ten Boom was a young woman in the Netherlands, she fell head over heels in love with a young man. But he broke off the relationship and married one of her good friends. Corrie was devastated. Nothing hurts more than being rejected and having somebody else chosen over you. When Corrie got home, her dad said something very wise to her: “Corrie, your love has been blocked, and he has married somebody else. Now, there are two things you can do with a blocked love. You can dam it up inside and hold it all inside and it will eat you up — or you can rechannel it to something or someone else and can focus on other people’s needs. You can live a life of love, meeting other people’s needs.” Corrie chose to do the latter, as we know from her captivating book The Hiding Place.

Consider the couple in agony who really want children but can’t have them. What are they going to do with that love that they would have had for their children? They can hold it in, or they can rechannel it. There are many children in the world who need love. This couple can focus on the needs of others.

Love is the antidote to loneliness. Instead of waiting to be loved, we need to give love; then love will be given back to us in abundant measure. [tweet this]

What does God have to say about your loneliness? What does He offer to fill the vacuum? The first thing He says is, “I understand. I really understand.”

In Jesus’ darkest hour — the night before He was crucified on the cross — He was in the Garden of Gethsemane and all His friends fell asleep. When the soldiers came and took Him to the trial, all His disciples fled. Then Peter denied Him three times. When Jesus took the sins of the world on Himself on the cross, He cried out,

Jesus understands loneliness. He says to you, “I understand how you feel. I care about you, and I want to help you.” Let Him help you conquer your loneliness as you turn to Him in prayer and reach out in love to lonely people around you.

1. What was a lonely situation for you, and how did you overcome it?

2. Think of one person in your church or neighborhood or workplace whom you know feels lonely, and consider some specific way to help him or her dispel that loneliness.

Everyone has struggled with loneliness. No one can escape it. I have come to believe as Amy Grant has that loneliness is a gift because, as I’ve experienced not just aloneness, but the loneliness, it has drawn me into a closer relationship with and deeper dependence upon Jesus than I ever would have been aware of without it! What about you? Come share your answers to Rick’s questions on our blog! We would love to hear from you about loneliness and the right ways to deal with it! ~ Laurie McClure, Faith.Full