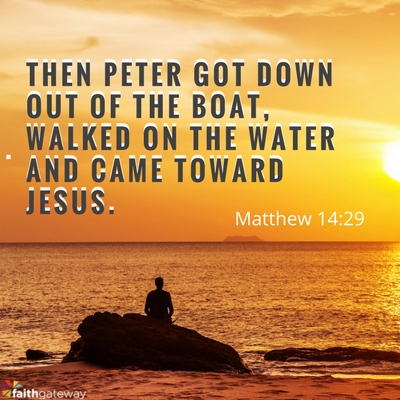 If we are to truly invest our hearts and base our lives on Scripture, it has to be more than a story to us. I have to have a baseline for my life. Without it, I have no solid foundation from which to live, love, question, doubt, believe…

Walking on water has become a catchphrase and convenient superpower for our contrived heroes. It’s right up there with flying carpets and Superman. We don’t understand it. We can’t necessarily prove it, so we label it a useful myth.

No wonder we have such a defective faith mechanism. If we shelve the examples and events that occur in the Bible alongside Marvel superheroes, we are removing the credibility of our one unshakable eternal foundation.

As Christians, we’ve been taught about the miracle of Jesus walking on water. It’s a great VBS story and contains some good memory verses, but how often do you sit down and soak in and ponder this miracle?

A strong wind was blowing and the waters grew rough. When they had rowed about three or four miles, they saw Jesus approaching the boat, walking on the water; and they were frightened. But He said to them,

These guys were three or four miles out to sea. MILES! And out of the darkness, a figure emerges walking on the waves. A Man they work with, walk with, live with is defying all that they understand about the physical world. Who wouldn’t be astounded?

The disciples weren’t just surprised or caught off guard. They were terrified! They didn’t even recognize the figure to be Jesus until He addressed them.

To add another dimension to all of this, scroll back a few verses. The disciples were in the boat in the first place because they were leaving the gathering where Jesus fed five thousand people.

Jesus said, “Have the people sit down.” There was plenty of grass in that place, and they sat down (about five thousand men were there). Jesus then took the loaves, gave thanks, and distributed to those who were seated as much as they wanted. He did the same with the fish. — John 6:10-11

That’s right. The feeding of the five thousand is one of Jesus’ most profound and talked about miracles. The disciples were there! They saw the little boy’s loaves and fishes. They saw the hungry throng. They even carried the baskets to collect the leftovers.

Despite it all, however, they couldn’t wrap their head around the possibility that Jesus could be striding towards their boat. Take that in. These men were privy to practically every miracle Jesus performed here on earth. Yet when it came down to fear or belief, their humanity won out… with a minor exception.

Then Peter got down out of the boat, walked on the water and came toward Jesus. — Matthew 14:28-29

When I think of all these miracles and the way Jesus lived with such humanity in His time on earth, I easily disconnect my life, my generation, my personhood from this other world that exists in Scripture. However, because our God was fully God and fully man, I realize I have to decide every day to believe that what seems impossible, isn’t. The best way I’ve found to go about it is to put myself there. I pray for an open heart and focus on the details of the text until I can see myself in the story. I try to connect the intangible with the tangible.

So join me — and Peter — for a moment. Even if you don’t buy the story precisely as Scripture has recorded it, let’s suspend reality for a bit. Press pause, and allow yourself to believe that Jesus did, in fact, walk on water. Believe also that Peter got out of the boat and for just a moment had the faith to meet Jesus on the waves.

Better yet, think about the last time you were at the beach. Do you remember the sound of the waves? The salt in the air? Was your skin sunburned? Were you thirsty? Remember the sting of the wind and that ever-present sense of sand that annoys you until you make it back home to a real shower in a building not sitting on a beach.

Or have you been on a boat in rocky seas? How did the pitch and yaw of the ship make you feel? Were you nauseated? Seasick? Did you wish that you were anywhere else?

Think on all that. And for a minute, close your eyes, breathe deeply, and let that scenario play out in your head…

Where did you go? Were you on the ocean? What did you smell? Who was with you? Make it personal. Make it your own.

Now, go back there and imagine Jesus standing before you — walking to you on the waves, while the storm continues to rage, waving to you to get out of the boat…

What do you do?

Is this just too incredulous or unbelievable to begin to accept? Are your eyes playing tricks on you? Are you suddenly suffering from some psychological breakdown?

Can you let yourself believe that it is real?

And yet, it is. Your Messiah is calling you to leave safety and join Him in the chaos on the waves. He really thinks that you can walk on the water too.

What are you going to do?

You really just have two choices here — belief or doubt, trust or fear.

Fear has dominated much of my life. More times than I care to admit, I’ve allowed fear to establish a stronghold in nearly every aspect of my life. From my marriage and motherhood to my career and many things in between, I have been afraid to fail, afraid to disappoint and, at times, afraid to even move. That kind of fear is paralyzing and makes belief of any kind seem all but unreachable. I don’t trust what I fear.

I flee what I fear.

God knows this instinct inside of me. Fight or flight wasn’t something created by scientists. It wasn’t an invention of modern humanity. Fight or flight was woven into our being along with the capacity to love or hate, to care or turn away, to believe or doubt. We were created with free will.

How many times are the words “do not be afraid” uttered in Scripture? Believe it or not, variations of that phrase appear 365 times in the Bible—one for each day of the year. It’s no coincidence. God knows your fear and my fear just as He knew how terrified Mary would be. He anticipated Joseph would be skeptical, at best, possibly livid, and undoubtedly afraid. Jesus perceived His disciples’ fear in that boat upon that stormy sea. He could hear Peter’s pounding heart. He read the thoughts that must have been racing through Matthew’s or Mark’s mind. He understood that despite witnessing one of the greatest miracles in the history of the world… the feeding of five thousand people… they were going to doubt and let their fear cloud their faith. Even after all they’d seen, belief wasn’t going to come easily or naturally to them.

Similarly in our lives, God knows that despite the many blessings, the many giftings He bestows upon us, we’re always going to find something to be afraid of or some excuse to quiet the voice He’s placed within us. We can easily fill our minds with doubts that will make us question, muffle, and in some cases, abandon the message He wants us to share. There will always be a reason to run and a shadow in which to hide.

It’s impossible, however, to outrun His watchful eye and gentle hand. As fast as we try to run to a safe place, God’s not a God who gives up easily. He is jealous for us.

He is jealous for YOU. And He yearns to hear that beautiful voice of yours resound through the song of your life. No one else in all of history sounds like you. No one else can satisfy the role you’re meant to play.

Despite knowing every single thing we’ve ever done or ever will do, every single thought we have thought or will think, He passionately pursues us. Even when there is an ocean between your heart and His, He will tame every tempest, wave, and current to hold your heart close to His. He sustains us in the storm; and in our darkest, most pitiful or agonizing moments, His grace is enough. His grace is perfected in us when we are at our weakest. Our shortcomings attract His perfection. Even our fallacies shine a spotlight on His strength, love, and perfect salvation.

I have to think that Peter knew all of this. Standing by Jesus’ side for years, he heard Him preach countless times. He had heart-to-heart talks by the fire with the man who broke his fishnets with His abundant provision. Peter was as close to Jesus Christ as any human being in history.

Perhaps all of those things came together in that one perfect moment of faith when Peter defied the wind and waves and threw his leg over the boat. In spite of his friends’ warnings and his own knowledge of the ocean and sailing, which probably told him it wasn’t smart to hop out onto the water. At that moment, none of that stood against his God. Nothing could pluck him from the loving, firm, eternal embrace of his Savior.

So he walked on the water too.

Then Peter got down out of the boat, walked on the water and came toward Jesus. — Matthew 14:28-29

What a moment: The perfect love of your perfect Savior so fully came alive within you that you literally stood on the sea, eyes locked with your loving Creator.

Peter’s moment didn’t last long, but he got out there! He got out of the boat. What about you? Do you want Jesus to call you out of the safety of the boat and into the supernatural? Come join the conversation on our blog. We want to hear from you about walking on water!