You have been set on this earth, at this hour, and in this generation to bring fame to the Lord Jesus Christ in your sphere of influence. And make no mistake: He has a specific way He wants you to bring Him that fame.

The challenge and joy of following Christ is discovering what that looks like for each of us. But discernment does not fall to us by accident. God delivers it to us very purposely through a renewed mind.

Romans 12:2 says, Do not conform any longer to the pattern of this world, but be transformed by the renewing of your mind. Then you will be able to test and approve what God’s will is – His good, pleasing and perfect will.

In order to know the specific way God wants us to bring Him fame, our minds must be renewed. As Ephesians 5:17 says, we’re looking to “understand what the will of the Lord is”.

In our three-pound brain, we have 100 billion neurons that can make 100 trillion connections. Every one of those neurons has something growing off of it that we’re told looks like trees. I find that particularly amazing because Jesus says in Matthew 7:20 that trees are recognized by their fruit. Whatever happens in our minds will bear fruit in our lives.

Science is able to measure the brain. What is its weight? How is it sectioned? What is its circumference? But scientists cannot even begin to estimate the mind. Think about this and let a little awe wash over you: your brain completely encases and houses your mind, yet your mind is infinitely larger than your brain. There is no definitive way to measure it. How many things can we name that are bigger than the material they’re embedded within? If we come up with an answer (like a computer chip, for instance), isn’t it interesting that virtually every example would in some way imitate a brain?

I once heard someone describe the mind as “the awareness of consciousness, the ability to control what we do and to know what we are doing and why.” You might read that sentence one more time to get its full implication. I think back upon the course of my life, the defeat I have lived in, and the things I have done and can remember so clearly at times asking myself, “What on earth am I doing? I don’t even know why I am making this decision.” Have you ever asked yourself something like that? Have you ever caught yourself doing something diametrically opposed to the person you really wanted to be? Ever asked in a state of complete bewilderment, “What am I doing?”

Knowing what you are doing and why is a sign of the renewed mind.

We can see this clearly depicted in our Father. I love the wording of Jeremiah 29:11 in the King James Version. It says, “‘For I know the thoughts that I think toward you,’ says the Lord.” The wonder of all wonders is that God, seated on His throne, is actively thinking thoughts toward us, and He knows the thoughts He is thinking about. We were created in His image, and part of what sets us apart from the animals is our intellect, to know what we are thinking and why. Renewing our minds is almost impossible if we are not able to zero in on what’s going on in our heads. Created in His image and invaded by His Spirit if we’re in Christ, we can – and if we’re to be victorious we must – think about the thoughts we are thinking.

The skeptical among us might object to ingrained thoughts being able to substantially change once they’re deeply set in there. Yet that’s what repentance means: to change my mind in such a way that it changes my actions. Even after years of destructive thought patterns, we can, in the power of the Spirit, have our minds completely changed. And our ability to discern and distinguish the will of God is dependent on it. You cannot think with your natural mind and hear the leadership of the Spirit. Our minds have to be renewed.

Now this part is really important: the renewed mind does not come about subconsciously. It is a battle.

Behold the battle language of 2 Corinthians 10:3-5.

For though we live in the world, we do not wage war as the world does. The weapons we fight with are not the weapons of the world. On the contrary, they have divine power to demolish strongholds. We demolish arguments and every pretension that sets itself up against the knowledge of God, and we take captive every thought to make it obedient to Christ.

Think with me about the word stronghold.

Ephesians 4:19 voices the New Testament definition of an addictive stronghold.

Having lost all sensitivity, they have given themselves over to sensuality so as to indulge in every kind of impurity, with a continual lust for more.

When we come face-to-face with our addiction, for most of us our first attempt is to manage it. To handle it. Keep it under control. But the nature of any kind of addictive behavior or thought pattern is the demand for more… and more… and more. If you were thinking it was just you, it’s not. It’s the nature of the addiction-prone human mind and body, for that matter. The addiction comes in, takes over, and gets a strong hold on us. In 2 Corinthians 10:5, it’s called a “pretension” because it pretends to arch itself over us and have more power over us than God.

Let there be no question that Satan will also encourage and coax and tempt and comfort us into a stronghold. It may not be politically correct to talk about the Devil anymore, but you better know for a Biblical fact that he really does exist. He is the enemy of your soul. For every plan God has dreamed for you, Satan has a plot to destroy it. In 2 Timothy 2:26 Paul encourages Christians to repent so that they may “escape from the trap of the devil, who has taken them captive to do his will.”

It’s eye-opening to realize that God has a will for my life and so does Satan. And both forces are continually yearning and calling for more: more and more of the Spirit of Christ (John 3:34) or more and more of the misery of bondage. That’s why we will never be able to simply maintain what we have now.

We either move toward more of Christ or more of our flesh.

You and I are not going to ascend into some mystical state of sinlessness while we still live in these bodies on this planet. We will be completely overtaken in His completeness, the imputed fully imparted, when we see the Lord Jesus Christ face-to-face. There is, however, an ongoing sanctification of our lives if we are willing to cooperate in the renewal of our minds.

Here is the reality. You are fully capable of living victoriously.

There is more than enough power in Christ for us to walk without any kind of sin having dominion over us. Of course we all sin. That goes almost without saying, but here’s the critical part that separates the victorious from the defeated: we can well be free of dominion sin, the kind that has a hold on us. The kind that gets exalted in our minds. The kind we keep making room for. The kind that makes itself at home in us. You and I want to be able to boldly confess what Paul says in 1 Corinthians 6:12, “I will not be mastered by anything.” If there is anything that has dominion over you, except for the Holy Spirit, it has to go. It cannot stay or it will wreak havoc over you.

I’ve learned this the hard way: when God speaks He rarely yells.

He often speaks in a small still voice and, if we had any idea the joy and insight and direction and intimacy with Him that we stand to gain, we’d be desperate to hear it.

Psalm 27:4 says, One thing I ask of the Lord, this is what I seek: that I may dwell in the house of the Lord all the days of my life, to gaze upon the beauty of the Lord and to seek Him in His temple.

Some of the greatest minds in your generation may never bring the impact they could because their minds will never be renewed enough to be still and focused before God. Our God is a jealous God. He wants to be your one thing.

After the shepherds left Mary, Joseph, and the baby Jesus alone in the stable, the Scripture says Mary thought about all that had happened and pondered it in her heart. Ponder is not a word that currently has a home in very many of our vocabularies, but look past the word and think about the concept. Everyone around Mary was amazed about all that was happening. Just take a look at the terminology in Luke 2:18. But Mary went beyond sheer amazement.

She actually let it sink in. She thought it through. She let none of it be wasted on her.

We move on to the next thing too fast. You can’t hear a still small voice, a gentle whisper when you are moving 100 miles per hour. Counter to your surrounding culture and maybe as the only person you know doing it, take the time to stop, push pause, and think about what God has said.

As you think, a physiological reaction is happening in your brain. A chain reaction is firing off in those billions of neurons residing in your head. When you think the same way repeatedly, that chain reaction burns a path through those neurons. The more we repeat our thinking patterns, whether destructive or constructive, we not only hatchet a path through our brains, but we pave it as well, creating a thinking superhighway where the thinking becomes automatic.

Some of us have laid highways in our minds that have taken us places we never meant to go. We keep going back to those destructive places and we don’t know why. It started with our thinking, and if we want to go to new places, they will start the very same way, right there with our thinking. We need to burn some new paths. Agreed?

In Christ, you do have the power to decide how you will think. No one gets to take that from you.

I come from a background of abuse. It began with my earliest memory and happened on and off in my young life until I reached middle school. Naturally my mind was filled with devastation, bitterness, and resentment. It caused me to be the world’s most foolish person in relationships and in big decisions. It occupied an enormous amount of my thinking: mental images of all that happened flashing through my mind, stuck on repeat. I would get so desperate I would cry out to God and say, “Lord, as of today, I’m never thinking about it again.” Any chance you’ve ever said that to Him, too?

But I always would. Then I learned what it meant to renew my mind. I began to think new thoughts about an old thing. And guess what happened. Its power and hold on my life began to wane. Then I began to get a genuine glimpse of God’s redemption: that He could use me to reach out to other young women who had been through what I had been through.

1 Corinthians 2:9–10 says, However, as it is written, ‘No eye has seen, no ear has heard, no mind has conceived what God has prepared for those who love him,’ but God has revealed it to us by his Spirit. 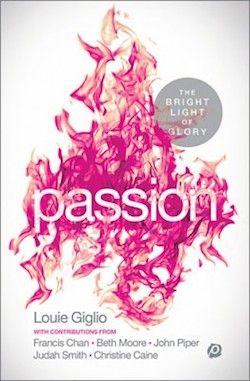