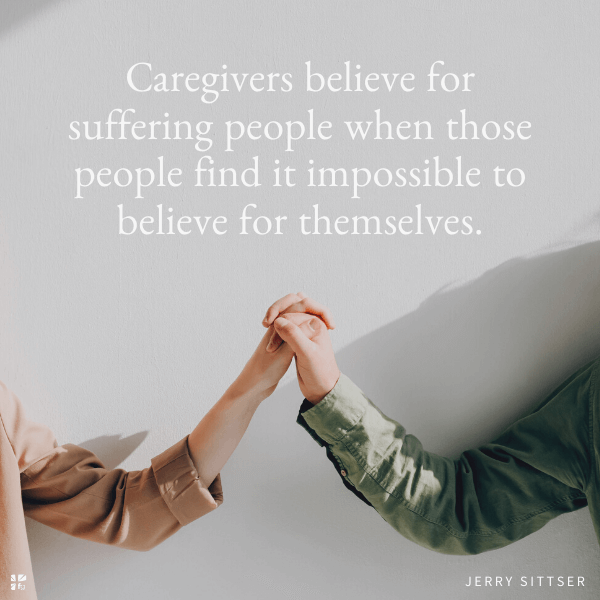 If I rise on the wings of the dawn,
if I settle on the far side of the sea,

even there Your hand will guide me, Your right hand will hold me fast.

If I say, “Surely the darkness will hide me and the light become night around me,”

even the darkness will not be dark to You; the night will shine like the day,
for darkness is as light to You.

No one can endure a significant loss alone. Still, many people try to, often out of necessity because no one is there for them.

I write this new, final chapter during a global pandemic.

As you know, caregiving is hard and demanding work. But it is also good and meaningful work.

In this case, hard and good are not opposites, any more than are winter and sunlight. Crises of all kinds invite and challenge us to comfort the needy and to serve the common good of society. Suffering provides the community of faith with an opportunity to live as genuine followers of Jesus who take care of friend and foe alike.

Jesus responded to the needs of people, no matter who the people were or how unworthy they were.

I have been on both sides of the equation. For a long time, I was a recipient of caregiving, and now I am a caregiver. I have learned a great deal over the years. Caregivers contribute in a myriad of ways. Some excel at quiet listening, others at serving, still others at organizing. In the end, it is not the expression of care that matters so much as the consistency and longevity. Those who suffer loss need help that goes beyond a card, a meal, a kind word, and a visit, though these contributions are meaningful. They are just not enough.

I was lost after the accident, like a man swimming in open water with no land in sight. I had my own grief to address, which was bad enough. But I had the grief of my children to worry about too, which was even worse. After the initial shock wore off and the adrenaline receded, I began to drown from exhaustion, despair, and utter terror. I was sinking, my arms flailing about and my lungs gasping for air. I thought I would never return to the land of the living or see the light of day again. I could see nothing on the horizon but more water.

Some people — in truth, it was just a few — committed to me for the duration, however long it took and whatever it required. This small group of people became my caregiving team.

My good friends Ron and Julie Pyle, as well as Monica and Andrea, stepped in to provide child care. Diane and Jack, my sister and brother-in-law, called me almost every day. Sister Florence invited me to her prayer center for an occasional visit, and she often sat with me in silence, a sentinel keeping watch. Rachel, now a good friend, served as my therapist. A small group of men encircled me. Now, thirty years later, we still meet together. To this day my wife, Patricia, comforts me when I mourn. I could not have survived without these friends, my caregivers.

They said very little. Their presence mattered more to me than their words. They became a refuge for me, a warm and safe home during a long and brutal winter. Being with me, not doing anything for me, met my greatest need. They never tried to solve my problems, which were mostly unsolvable anyway. They never offered answers, which I had to come to on my own. They never put me on a timetable, which would have met their needs, not mine. They were simply present, the only visible object I could see on the horizon. That was their gift to me.

People feel uncomfortable around someone who has suffered a catastrophic and irreversible loss. It feels awkward. It is awkward. They hardly know how to respond or what to say. Some ignore loss, as if nothing ever happened. Others try their best to make it all better.

Christians are as guilty of this as anyone, if not more so. They want to make everything better. There is a reason for their discomfort and insensitivity, and it is born out of the best of intentions. Christians believe they know the truth. They assume that speaking the truth will somehow diminish the pain. But truth is no more effective in eliminating pain than a doctor’s word of explanation mitigates the pain of a surgical procedure.

Mere words lack power, even when they communicate truth. Sometimes it is best to be quiet. Job’s three friends rendered him the greatest service when they sat with him in silence (See Job 2:13). Once they opened their mouths, they did more harm than good.

Besides, I did not begin by asking questions, to say nothing of searching for answers. I was simply too confused and immobilized by pure pain to ask even the most basic questions. I sat in that pain for a long time.

I felt utterly bewildered, as if I were staring at words on a page — simple English words that I had known since I was a child — that made no sense to me. The world became a puzzle. I could not understand why the accident occurred. The sheer irrationality of it turned the entire world upside down.

Loss is not a rational experience. There is no way to explain it.

Countless people have said to me, “Just tell me how to think about this,” as if a rational answer would provide a way out. But people who have suffered major loss cannot reason their way out, work their way out, or feel their way out. They can do nothing to escape it. Before they find a way out, they first must find a way in. Once in, they discover that the way out is very different from what they had imagined.

As I made my way in, I did find a way out. But it was not sequential — in, then out — but simultaneous — in and out. I became like a window. Standing outside myself, I looked in. Standing inside myself, I looked out. I learned how to observe my grief, as if I were a scientist studying myself. I was aware of being studied, even as I did the studying. I was both reflective and emotional at the same time.

I learned over time that the two big dangers in facing loss are to indulge the loss, as if it is death itself, and, conversely, to dismiss the loss and “move on,” as if no death occurred at all. But I think it is possible to learn from the loss and experience the full force of it at the same time, engaging both head and heart. Standing outside the self, we ask, What is happening to me right now? Standing inside the self, we ponder, What is happening in me?

As I tried to walk this tightrope, a new world opened up before me. Of pain, to be sure. But so much more. Of memory. Of horror. Of confusion. Of darkness. Of beauty. Of transcendence. Of light.

But what kind of a God? Not a God of goodness but of terror and mystery, or so it seemed at the time. Where was God during that horrible experience? Was God present? How could God be present? These questions were not speculative and abstract, little more than intellectual curiosities that a search on Google can answer. They were life-and- death questions to me.

How would I be able to survive, especially if there is no God? What would happen to me if I had to live in this pain forever? If there was no recovery and redemption? If the darkness swallowed me up?

At just this point I discovered why belief plays a central role.

What suffering people choose to believe about reality does matter, not because it has magical power to answer every question and deliver them from suffering, but because it can provide a deeper kind of power and perspective that will help them understand it, grow into it, and carry it.

Every human being believes something, but not all believe the same thing. By belief, therefore, I am referring to Christian belief: God created a good world; human rebellion damaged it; God has acted in history to make all things right; God eventually came as a person, Jesus Christ, to win the world’s redemption. In the end all will be made right, well, and whole again.

It is this belief — Christian belief — that saved my life.

But it was actually not my belief that mattered, at least not initially. It was their belief, the belief of my community: family, friends, pastor, therapist, and the like.

Their faith carried me when I could muster none myself. My community of friends stood beside me, held me, and believed for me.

The stakes were high; they always are. People suffering loss may struggle, wallow, rage, weep, and whimper for months, even years. But eventually they come to a moment of decision. What they choose to believe in that liminal moment will make an ultimate difference in their lives, one way or the other. It may call forth life in them, like Jesus commanding Lazarus to wake up from death. Or it may push them deeper into darkness until they are lost forever, like Judas giving up on God and on his very life.

At this point, caregivers stare into an abyss of mystery. They feel utterly powerless and inadequate, as they should. They wonder if their grieving friends will ever find life and faith again. They have no idea what to do and how to help. It is all too much.

Which is why their belief plays such an important role. It has unspeakable power; it exercises incredible influence. Because it enables them, members of the community of faith, to remain steady, available, and present.

Caregiving almost requires belief in the existence of God — a good God who cares about people, even when He seems absent and cruel; a patient God who stays with people, even when they slip into a terrible lethargy and depression; a redemptive God who calls people into a new and better story, even when they keep returning to the old one; a powerful God who can turn death into life, even as death continues to reign.

A God we see and know in the face of Jesus Christ.

Caregivers believe for suffering people when those people find it impossible to believe for themselves. They are like parents sitting with a child suffering from nightmares. To that child the nightmares are real, more real than reality. Parents know morning is coming, though the child refuses to believe it. But they believe it for him or her. They hold that child tightly until morning arrives.

You hold loved ones tightly until morning arrives. It is what the community of faith simply does.

I thank God for people like you. In the months and years ahead, the world is going to need more of you to stop the bleeding, comfort the grieving, mend the broken, and get people back on their feet.

Grief turns the world upside down, inside out, shakes it around, and unsettles every sense of normalcy possible. It requires the community of faith to come alongside us to hold onto us and believe for us when we can’t muster faith on our own. Are you a caregiver? We are thankful for you! We need you! Come share your thoughts with us. We want to hear from you. ~ Devotionals Daily