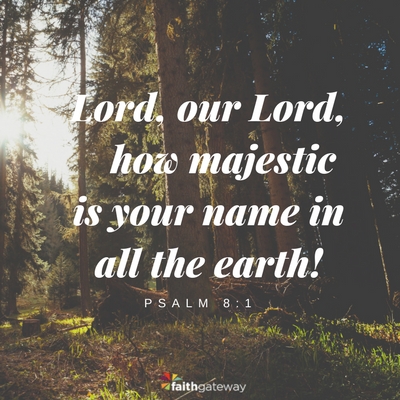 I am a Christian because I believe that Jesus is who He says He is, and I have accepted His sacrifice as payment for my sin. Beyond that, the first and foremost assertion of Christianity is implied by the question, What is man? The answer the psalmist gives to his own question demonstrates a starting point for Christianity that is different from any other belief system, secular or religious, except for Judaism:

When I consider Your heavens, the work of Your fingers, the moon and the stars,  which You have set in place, what is man that You are mindful of him, the son of man that You care for him? You made him a little lower than the heavenly beings and crowned him with glory and honor. — Psalm 8:3-5

These magnificent words were penned nearly three thousand years ago by a man marveling at the beauty and diversity of what he saw around him in nature — and yet recognizing the distinctiveness of a human being in contrast to nature.

A story circulated some years ago about Sherlock Holmes and his loyal friend and student Watson, who were together on a camping trip. After a good meal, they lay down for the night and went to sleep. Some hours later, Holmes awoke and nudged his faithful friend awake.

“Watson,” he said, “look up at the sky and tell me what you see.” “I see millions and millions of stars,” Watson replied.

Watson pondered the question and then said, “Astronomically, it tells me that there are millions of galaxies and potentially billions of planets. Astrologically, I observe that Saturn is in Leo. Horologically, I deduce that the time is approximately a quarter past three. Theologically, I can see that God is all-powerful and that we are small and insignificant. Meteorologi- cally, I suspect that we will have a beautiful day tomorrow. What does it tell you?”

Holmes was silent for a minute before speaking. “Watson, you idiot!” he said with a measure of restraint. “Someone has stolen our tent!”

As funny as this story is, if we apply it to our present discussion, we see that an enormous robbery has taken place in which someone has stolen from you that which provides shelter or the covering for your life. It is not accidental that those who stick to a scientific single vision of ultimate reality start by denying a Creator, and from there, all of the disciplines are herded together to create a mentality that asserts that any worldview seeking a transcendent explanation for our universe is unwelcome in intelligent discussion. When science categorically and unconditionally insists to all who hunger for religious truth that there is no such thing, it has ceased to be science and is only revealing its hostility.

This, I’m afraid, is what is revealed by the stridency and belligerence of the “new atheists.” They are not open or willing to go where the evidence leads, unless that evidence sustains their own naturalistic assumptions. They have covertly reduced all philosophical thought and deduction to — ironically — faith. Perhaps inadvertently, in denying a Creator they also deny the essential worth of creation and of the act of creating, which means, then, that all great art, music, architecture, and writing must be consigned to the ash heap, because the inspiration behind these great expressions and reflections of the transcendent is denied as non-real or faith (it cannot be scientifically or empirically studied or observed). The same must apply to all the great themes of love, beauty, truth, morality, justice, and the like, as they too cannot be empirically or scientifically studied and observed.

On a side note, I would like to say that certain people who held these beliefs of naturalism could have saved me a lot of reading. In my days of graduate studies the noted philosopher Antony Flew was the atheist with whom we had to contend. I spent hours coming to terms with Flew’s arguments and all that he demanded of theism in terms of logic and proof. Because he was the most noted atheist of that time, it was imperative that we understood and were able to respond to his challenges.

Now times have changed, and Antony Flew finds himself in the position of writing against the vociferous atheists of our day because he contends that atheism is no longer a logically tenable position for him. He is willing, he says, to go where the evidence leads. In his book There Is a God, Flew reflects on an argument regarding the probability of human origin that he had to deal with in his younger days. The argument runs like this: How long would it take for an infinite number of monkeys pounding on an infinite number of typewriters to compose a sonnet by Shakespeare? (Believe it or not, this argument was based on an experiment conducted by the British National Council of the Arts.) A computer was placed in a cage with six monkeys, and after one month of hammering away at the keys and using the computer as a bathroom, the monkeys produced fifty typed pages — but not one single word. This is amazing, considering that the shortest word in English could be a one-letter word such as the letter a or I. But a one-letter word is only a word if there is space on either side of it. Flew points out that if one considers that there are thirty keys on a keyboard, the possibility of getting a one-letter word is one in 30 x 30 x 30, which is one in 27,000. If these attempts could not even result in one one-letter word, what is the possibility of getting just the first line of one of Shakespeare’s sonnets, let alone a whole sonnet? Flew quotes scientist and author Gerry Schroeder on the sheer improbability of the random existence of the universe:

If you took the entire universe and converted it to computer chips — forget the monkeys — each one weighing a millionth of a gram, and had each computer chip able to spin out 488 trials at, say, a million times a second; if you turn the entire universe into these microcomputer chips and these chips were spinning a million times a second [producing] random letters, the number of trials you would get since the beginning of time would be 10 to the 90th trials. It would be off again by a factor of 10 to the 600th. You will never get a sonnet by chance — let alone the complete works of Shakespeare. The Universe would have to be 10 to the 600th times larger. Yet the world just thinks the monkeys can do it every time.

For Flew, the sheer improbability that such an intricate design as we have in this universe is the product of mindless evolution is insurmountable; the universe must have purpose and design behind it.

As powerful an argument as statistical improbability is, a simple point I want to make here is that although the specifics may be different, this is not a new argument for the improbability of chance. Antony Flew knows this to be so. But I must add that no dyed-in-the-wool naturalist is likely to suggest that our universe could not have beaten such odds. They will say that just because it is improbable, it doesn’t mean that the universe didn’t happen this way — a view that vehemently resists both human limitation and the humility required to follow reason where it leads. Instead, they will wax eloquent, like Watson, on endless categories of convoluted descriptions of what “might” or “could” have happened, all the while ignoring the most obvious deduction or conclusion before them as to the origin of the universe — that it was a deliberate act of creation by an intelligent being. Stubbornly and deliberately ignoring that “the tent has disappeared,” there is no way for naturalists to account for human relational hungers, so they refuse to recognize that these hungers are validated by the real fact that people relate to other people through a relationship.

To even think we could get a Shakespearean sonnet by accident assumes, first, that we have other sonnets to which we can compare the “accidental” one in order to know that it is indeed a Shakespearean sonnet and, second, that whenever we see intelligibility we assume intelligence. Even if the monkeys could have produced a sonnet by accident, we would still wonder at the intelligence behind the technology of the keys and the development of the alphabet, the aesthetics of this sonnet in comparison with other sonnets, and, to boot, whether the monkeys knew what they were doing.

The numerical impossibility actually defies even the “chance” analogy. And in the origin of the universe, as naturalism tells the story, there are no monkeys to begin with. The monkeys evolved from chemistry and energy after the universe already existed. There are no alphabets to be explained. There is no idea of a sonnet except as nonexistent monkeys pounding on nonexistent keys. All these assumptions are circular.

Let me illustrate this point a little differently through the fascinating story of George Frideric Handel’s composition of Messiah. His career as a composer was on the verge of collapse, and he was naturally discouraged, feeling that he was a failure. The words for Messiah were given to him as a possible oratorio, and he decided to try one last time to compose a great piece of music. When he reached the text for the “Hallelujah Chorus” and began to reflect on the words, he said later that he saw the heavens opened and the great God himself. And as the great chorus reached its climax at the first public presentation of Messiah before the king of England, the king rose to his feet in recognition of the awesome power of the words and music combining to give honor to the One to whom honor is due. The convergence of intelligence, aesthetics, and the inspirational power of a transcending reality in the person of God has the power to bring even kings either to their feet or to their knees.

All of this is dismissed as mere nonsense by the skeptic. Not only does he take that which appears statistically impossible and try to make it actual; he takes the emotion and spiritual expression that is common to the human experience, and is therefore actual, and tries to make it farcical. Is it really possible to deny such a reality as that described by Handel’s experience in writing the music for Messiah without even a twinge of doubt that perhaps there is more to life than science alone?

This intertwining of the disciplines with relationship that is both “intrapersonal” and “interpersonal,” within and without, reveals a distinctiveness that we must recognize as sacred and inviolable. But this is denied repeatedly in naturalism, which insists that we just happen to be here, that we’re all just “dancing to our DNA,” as Richard Dawkins puts it. For the Christian, the awesome nature of the world we are part of does not point to brute science in isolation but to the Creator, a personal God who can and does relate to human beings.

Has Christianity failed you? Do you remember why you are a Christian? Are you relating on a personal level with our God who is so deeply personal? Come share your thoughts with us on our blog. We want to hear from you! ~ Devotionals Daily