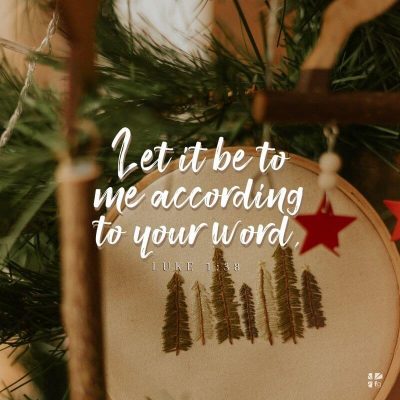 In the sixth month the angel Gabriel was sent from God to a city of Galilee named Nazareth, to a virgin betrothed to a man whose name was Joseph. — Luke 1:26-27 ESV

Have you ever planned an elaborate dinner party only to have your guests cancel? Or spent days anticipating a date with your spouse only to have the babysitter get sick? It’s so disappointing when the best-laid plans go awry.

Women are a planning sort of people. As a whole, we tend to be less of the go-with-the-flow type. We plan births, meals, and wardrobes with great attention to detail. We research and analyze things to death. With that in mind, how can you not have compassion for Mary? The girl was planning a marriage.

Maybe she was deciding what entrée to serve and arranging seating to make sure Aunt Bertha didn’t sit too close to the wine table, or maybe she was writing “Mary loves Joseph” in the dirt with a stick. Scripture makes it clear that when Gabriel showed up, Mary was a betrothed woman.

She surely had some things planned, and those plans did not include giving birth to the Son of God.

We’ve all had times when our plans didn’t work out. Perhaps we thought we would be married by now, yet our Facebook status still reads “single.” Or we always assumed we would still be married right now. We imagined ourselves with a flourishing career, but instead we find ourselves eking out a minimum-wage existence.

Our mistake is that we want to compare our plan with God’s plan. We want to see them side by side and weigh the pros and cons of each. Our best response, however, will always be the same as Mary’s when the angel crashed her wedding plans.

Lord, I like to think that I have everything planned out. Remind me to always leave room in my plans for Your providence.

Excerpted with permission from Devotions from the Front Porch by Stacy Edwards, copyright Thomas Nelson.

This year more than any other, plans have gone out the window. Everything has been haywire. Nothing has been on schedule or how we had anticipated it being. Has this been a “Let it be unto me according to Your word, Lord” year? Maybe we need to reframe our thinking and start today. Come share your thoughts with us. We want to hear from you about being “Let it be unto me” kind of people! ~ Devotionals Daily