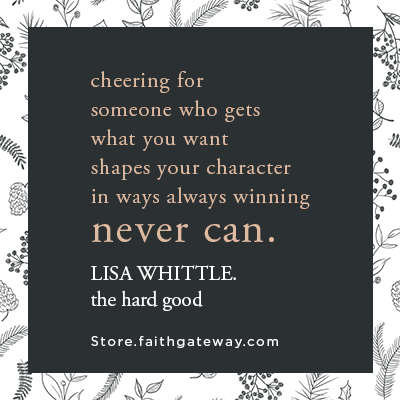 I live in a home of athletes, raised in the school of hard work and dedication — literal blood, sweat, and tears. When your boys play football and you’re the mother who supports them, you learn early on to live with both the smells of their jerseys and the fears that require prayers for God to have them out there on the field.

I expected sports to teach my kids important things. What I didn’t expect is how much my children’s experience with them would also teach me.

My boys never asked my permission to fall in love with football, or I probably would have said no. But my joy had no choice but to get on board, watching my sons do what they loved. My middle son, Micah, started playing especially early, at the age of seven, for the local rec league at the nudge of the coach (a close family friend) and upon the lure of a fancy stitched uniform. He played receiver, and his best friend played quarterback. Every Saturday we loaded up the Suburban with coolers, donned T- shirts with “Whittle” across the back, and watched our boy play his guts out, often up against boys twice his size. When he scored his first touchdown, and then a second and a third in the same game, we knew his talent was going to take us for a fun ride.

Season after season, summer after summer of practice and off- season workouts, we lived through eleven years of football life. Getting up at six in the morning for workouts with the older boys, just to be near the sport, rec league to middle school to JV to varsity. I even had a summer stint as a volunteer coach’s assistant when Micah was about ten and between seasons. When he was in eighth grade, he moved to a school ranked nationally in football. He was on a team of able peers; they all soared in the sport. As early as ninth grade, conversations in the stands began circulating about who might get offers to play at the next level, though the boys were barely fourteen.

Junior year of high school arrived, and with it, for hopeful athletes, prime season for college offers. Despite the team winning a state championship and despite Micah’s hard work, the season was racked with personal disappointment. One by one, Micah’s best friends who had sweated on the field with him for years received offers from big schools to play college football. Micah received none.

I watched the whole thing, my heart breaking for him a little more every time. I watched him get bypassed, and I sensed the pain of being overlooked. But what I saw at the same time taught me an invaluable lesson: I saw Micah cheer for each of his friends even while his heart wanted what they got. I knew he hurt. As I had so many times through the years when he took the field, I prayed for him. But this time I prayed something different.

I prayed that in the quiet of his bedroom, alone with his thoughts, God would keep him from envy. That he would be comforted in his pain. That he would know God saw him, cared for him, and had a plan for him far beyond football. That even though this moment was hard, he would eventually discover, in some way, why it was good. I knew at least in one way it already was:

the invaluable lesson of cheering for someone who gets what you want shapes your character in ways always winning never can.

Through this, my son would become a better man.

That was the real prize worth getting.

Undoubtedly you have your own story that involves a moment when cheering for someone else didn’t come easy. When someone gets what we have worked for or desperately want for ourselves, it is almost unthinkable to celebrate their gain. Maybe you are thinking about what someone else has that you want right now. If not, it might not take you long to recall something. We aren’t typically short on desire.

The risk for any of us who watch others get the engagement ring we want… the work promotion… the attention online… the coveted position in life we feel we’ve worked equally hard for or (buckle up — here’s the truth) feel we deserve more, and then deny that those feelings exist, is that it builds bitterness, not character. So I don’t want us to deny that we want, as Jesus followers are prone to do, like “good Christians.” I want us to work through the very human feelings.

Sometimes we are a front-end reactor. We take someone else’s success hard right at first, but we pray, work through it, and wind up with a healthy perspective.

Other times we are a back-end reactor. We offer support immediately, and later comes a realization of a perceived injustice, and we wind up angry. This way of processing often happens when the root of bitterness sets in and the initial right attitude is derailed by negative thoughts that have festered over time. (Or at times the initial support wasn’t sincere.)

Sometimes we never accept someone else’s success or gain, never change our perspective to see any positive in it, and never let it change us for the good. Sadly, this is where a lot of us live, stewing for years over something someone else has that we never got. Something we may even still think we want that is clearly not meant for us.

The person who learns to cheer for someone else doesn’t have those mental restraints, which is why they become such a usable force for the Kingdom of God.

When for most of our life we tend to be so inwardly focused, it’s no wonder cheering for others becomes a notoriously hard task. In nearly every equation the thing we most need to shake off is ourselves. (This does not include being taken advantage of and boundary-less, which is not godly, has no merit, and stems from something completely different.) If this sounds foreign to your ears, it’s probably because you’ve gotten used to the opposite message of this world, which says that we are the most important, which is fantastic to hear, but not gospel. We actually aren’t on the list when in Matthew 22:36-39 God gives the top two Greatest Commandments: to love God (first) and love your neighbor (second), adding “as yourself” to give reinforcement to the depth because He well knows how much we love ourselves.

Before you misunderstand this to mean that I don’t believe we are important or don’t believe in self-love, know that anytime God asks us to love others, it is with the Sovereign understanding that on any level of its sacrifice, we will find our deepest fulfillment. This is a way to love ourselves.

Cheering for someone who has what we want is like a gift card we give ourselves to more freely see our blessings, and, as a result, we’re not so focused on what someone else has.

It all comes full circle. Especially when accompanied by prayer, confession, and study of the Word, cheering for someone else is the way to break those bitterness chains. Most of us don’t take the initiative, instead waiting to feel joy for the other person. But when we choose the joy, our feelings follow suit. First take a chance. Then see the change in you.

Excerpted from The Hard Good: Showing Up for God to Work in You When You Want to Shut Down by Lisa Whittle, copyright Lisa Whittle.

Cheering for someone who gets what you want changes you for the better. Sometimes it’s easy because the stakes are low. But, other times it’s so very hard because someone else gets what is our deepest desire, the thing we’ve been waiting for and setting our hearts and hopes on. Learning in that moment or through that circumstance to truly be glad for the other person is life-changing, especially when we thank God on their behalf! Has that been true in your own life? Come share with us! ~ Laurie McClure, Faith.Full