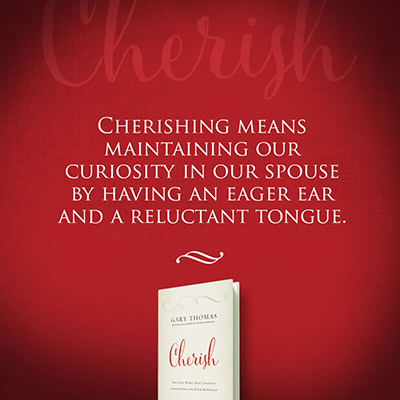 To cherish is to heal.

To ridicule your spouse or to be apathetic about your spouse is to further injure them. Contempt merely reinforces the negativity from earlier in your spouse’s life. You push her down lower and lower. Cherishing lifts her higher and higher. To not cherish is to reinforce the worst and make it worse yet.

To cherish is to call out the beauty and to make what is latent yet more beautiful.

I’m not alone in this. One wife gave her husband a journal she had worked on for an entire year. It listed everything she noticed about him throughout the year — mentioning specific things he had done on specific days — that made her glad to be married to him.*

When she gave him the journal, her husband immediately sat down in a chair and read the entire journal in one sitting. Later, when recounting this gift to a friend, he told him, “Reading that journal makes me aspire to be the man she thinks I am.”

I’m grateful to Dave and Ann Wilson (daveandannwilson.com) for sharing this story with me. Dave is the pastor of Kensington Church in Troy, Michigan. He and his wife, Ann, speak around the country on marriage.

Guess what? He now gets a journal like that every year.

A common complaint among wives is that their husbands won’t open up, won’t be vulnerable, won’t emotionally give of themselves. The reality is that many guys are too terrified of being truly known. Some of us have been ridiculed all our lives because we weren’t as smart as our older brother or sister, as athletic as the star football player who started shaving in sixth grade, as attractive as the members of the boy bands whose posters our sisters put on their bedroom walls — and we kind of figured out that we sometimes were just plain embarrassing to our family. Now we somehow — wonder of wonders — found a woman who chose us, and we don’t want to risk losing her or it’ll be yet one more rejection — like getting cut from a sports team, being let go at work, or getting seven rejections when applying to college or grad school.

Even those men who seem to succeed often feel like a failure. I’ve talked to them! They’re worried they’ve been promoted so high that they’ll finally be exposed. Everyone will realize it’s all been a ruse; everyone has been tricked — and they are just the utter, insignificant failures that they’ve always felt they are and often been told they are.

Let’s say a boy grows up slight in stature (as God created him). He’s belittled by a gruff father or mother, ridiculed by boys and girls alike. He becomes a man, no longer so slight, but still carrying the internal dialogue and slightly sensitive persona ingrained in him through years of ridicule and insecurity. God sees a hurting soul. God has cried over that poor boy’s treatment, and God hates it when a woman who hasn’t taken the time to understand or empathize says in a moment of cutting anger, “Oh, grow up and be a man.”

It’s a casual comment, perhaps not even intended to be so hurtful, but because of that guy’s past, it cuts to the deepest part of his being. Oh, he may never tell his wife how much it hurts, but you can be sure he’s bleeding, spiritually and emotionally, on the inside.

Never forget: You married a spouse with natural weaknesses.

You married a spouse with a history of hurt. We can be agents of healing redemption and acceptance in our marriage, or we can do further harm, perhaps unintentionally. Though I’m sure the wife who said “grow up and be a man” would have been appalled to know how tough her words felt, what her husband likely heard was, “You haven’t hurt enough. Those people who ridiculed you when you were a child? They were right! You’re pathetic. You need to suffer more, and I’m just the person to do it.”

She would never use those words to her man, but because of his past, that’s what he’s hearing. A casual, noncherishing comment, with just a dash of contempt, is digging up the old scripts from his childhood that now play back the same destructive, discouraging message: you don’t matter.

You become a messenger of Satan instead of a servant of God when you unleash that, even unwittingly.

Don’t just tell me what your spouse does. Tell me why, and then we can talk about the pathway of love and healing.

If you don’t know the why, you’re just an accusing judge who knows nothing of love, only something of punishment.

I am not excusing sinful or abhorrent behavior. I’m just asking you to have some empathy about the fact that we live in a cruel world, vicious in its treatment of the people we marry, as well as a positive vision for how profoundly a cherishing marriage can heal past hurts. No, not every abused man grows up to abuse his wife. Not every woman allows herself to be crushed by others’ ridicule; some become incredibly strong and heroic in the face of their pasts.

But here’s the thing: Why not help your spouse get stronger by cherishing them rather than confirming and increasing their weakness by treating them with contempt? Wouldn’t you rather be married to someone who is improving rather than sliding backward? And do you think contempt is “medicine” for a warped psyche that sees the world through perverted eyes?

What if you took the long-term view? “I’ve got twenty to fifty more years to gradually cherish this man or woman out of their past hurt and weakness.” Does it sound so impossible then?

Some of you need to repent right now and then ask for your spouse’s forgiveness. You have ridiculed your partner’s limitations (let’s be honest, some of these limitations — IQ, body type, personality — are there by God’s design), and you have increased their hurt. You are pushing them down instead of lifting them up. You resent them for not being where you want them to be instead of getting on your knees to help them grow in ways God would have them grow.

This is why I call cherishing a strategy as much as a command. The more you cherish, the more likely there will be even more to cherish in the future. The more you pour contempt into your marriage, the less you will find to cherish.

Will you please do yourself and your spouse a favor? Spend time in prayer during the next twenty-four hours, asking God to show you just how empty, tired, and beat-up your spouse felt at the beginning of your relationship because of the way they had been treated for decades before they arrived in your arms.

The finish line of a marathon can be quite an ugly place. When I cross the finish line, I want two things: something to drink and somewhere to sit or lie down. When Lisa guides me to a place where I can rest and brings me something to rehydrate, I slowly become a new man.

It’s the best description of cherishing I can give you: I’m exhausted, at the end of myself, but with my wife’s loving care, bringing me a little hydration, a little protein, a little rest, I feel the life coming back into me.

Consider marriage to be like the end of a marathon, and you’ll begin to get a glimpse at how depleted emotionally your husband or wife may have been as you began your marriage. That’s how thirsty he or she was for your affection. That’s how much he or she wanted to just lie down in your acceptance.

Become the most wonderful wife in the world by telling him — with your attention, your affection, and your acceptance — “You’ve made it across the finish line into my arms. I’m yours, and you are mine. We’re one. I’m thrilled with you. I love you. You can rest in my acceptance. I will recharge you with my affection. I won’t pull away when I get to know you; I’ll draw closer. I won’t disrespect you when I find the dark within you; I’ll pray for God to flood you with his light. I won’t compare you to any other man because to me you are the only man of my affections; you are the standard; you are my man of all men. I won’t look at another man; I won’t touch another man; I won’t compare you to any other man. I will feast my eyes and fill my heart with my love for you.”

Men, when your wife faces a major life blow — she becomes seriously sick, finds out she can’t conceive, suddenly struggles with weight gain, is fighting depression for the first time in her life, can’t get over the sense that it feels impossible to balance her career and her parenting — these are the exact moments when you need to put cherish on overdrive. We have to say, “Now is the time she truly needs the medicine of cherish.” Instead of pulling back in disgust — “I want a healthy and happy wife, not a broken one!” — we need to step forward with cherish. If you fail to cherish your wife in the difficult times, the damage done by those difficulties will be twice as bad and take three times as long to heal.

Spouses, how can you cherish your marriage partner starting today? How can you show him or her the love of God toward Jerusalem specifically today? Come share with us on our blog. We want to hear from you! ~ Devotionals Daily