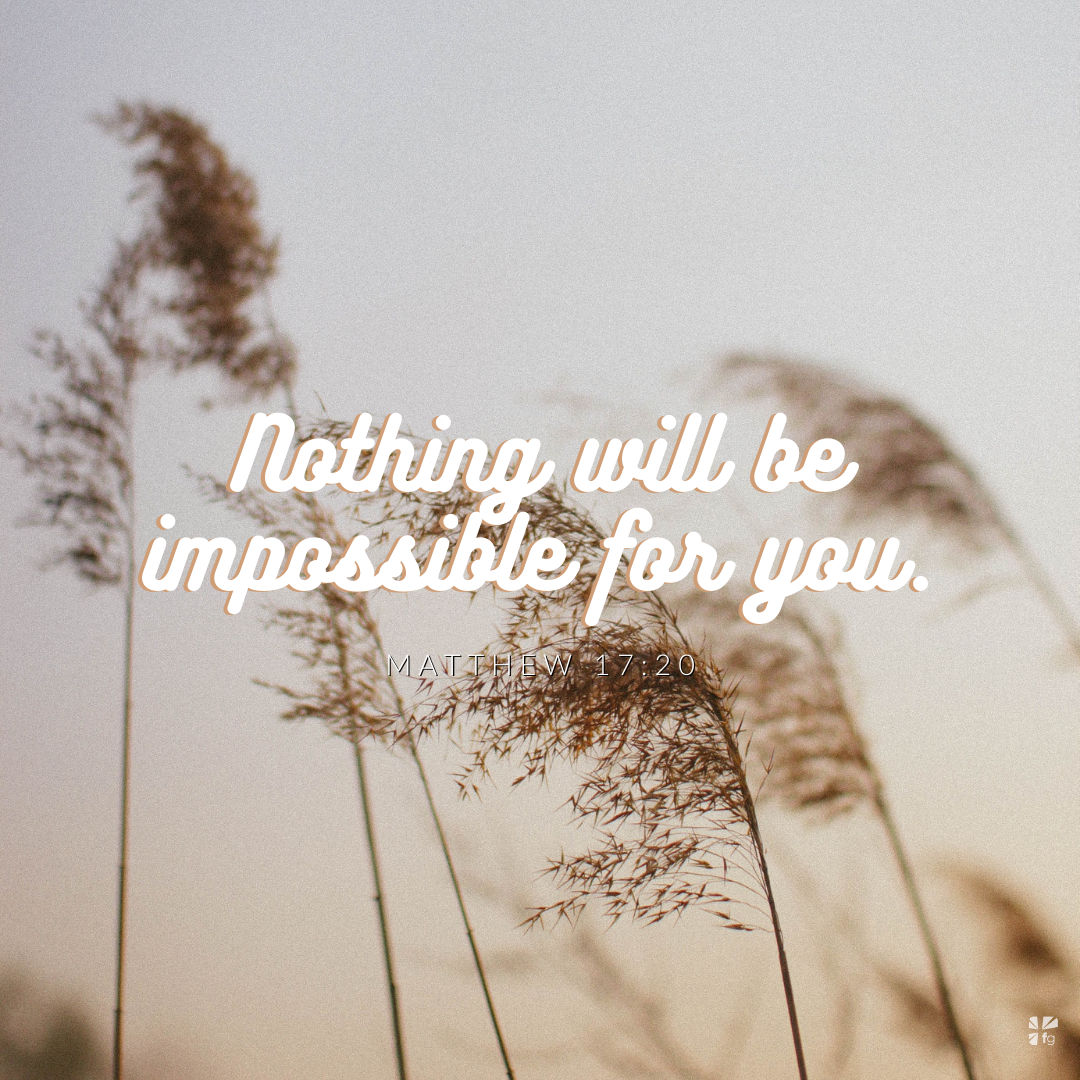 Truly I tell you, if you have faith as small as a mustard seed, you can say to this mountain, ‘Move from here to there,’ and it will move. Nothing will be impossible for you. — Matthew 17:20, NIV

In Equatorial Africa, far from pharmacies and hospitals, a woman died in childbirth, leaving behind a grieving two-year-old daughter and a premature baby in danger of succumbing to the chill of the night. With no incubator, no electricity, and few supplies, the newborn’s life was in jeopardy.

A visiting missionary physician from Northern Ireland, Dr. Helen Roseveare, asked the orphans to pray for the situation — but a faith-filled ten-year-old named Ruth seemed to go too far.

“Please, God, send us a water bottle,” she implored. “It’ll be no good tomorrow, God, the baby’ll be dead; so please send it this afternoon.” As if that request was not sufficiently audacious, she added, “And while You are about it, would You please send a dolly for the little girl so she’ll know You really love her?”

Recalled Roseveare, “I was put on the spot. Could I honestly say, ‘Amen’? I just did not believe that God could do this. Oh, yes, I know that He can do everything. The Bible says so, but there are limits, aren’t there?”

The only hope of getting a water bottle would be from a parcel sent from the homeland, but she had never received one during the almost four years she had lived there. “Anyway,” she mused, “if anyone did send a parcel, who would put in a hot water bottle? I live on the equator!”

A couple of hours later, a car dropped off a twenty-two-pound package. The orphans helped open it and sort through the contents: some clothing for them, bandages for the leprosy patients, and a bit of food.

Oh, and this: “As I put my hand in again, I felt the… could it really be? I grasped it, and pulled it out. Yes. A brand-new rubber, hot water bottle!” said Roseveare. “I cried. I had not asked God to send it; I had not truly believed that He could.”

With that, little Ruth rushed forward. “If God has sent the bottle, He must have sent the dolly too!” she exclaimed.

She dug through the packaging and found it at the bottom of the parcel: a beautifully dressed doll. Asked Ruth, “Can I go over with you, Mummy, and give this dolly to that little girl, so she’ll know that Jesus really loves her?”

That parcel had been packed five months earlier by Roseveare’s former Sunday school class. The leader, feeling prompted by God, included the hot water bottle; a girl contributed the doll.

And this package, the only one ever to arrive, was delivered the same day Ruth prayed for it with the faith of a child.

A mere twist of fate? An embellished yarn? Or perhaps a miracle?

According to a 2004 survey, 55 percent of US physicians have seen results in their patients that they would consider miraculous. Furthermore, three-quarters of the 1,100 doctors surveyed are convinced that miracles can occur today — a percentage that’s actually higher than that of the US population in general. So maybe it’s not surprising that six out of ten physicians said they pray for their patients individually.

The big issue, however, is whether belief in supernatural occurrences is based on mistake, misunderstanding, fraud, legend, rumor, wishful thinking, confirmation bias, the placebo effect — or reality.

In other words, does a miracle-performing God actually exist, and has He left His fingerprints all over supernatural events throughout history down to the present age? Is He even available to intervene in your life today?

That’s what I set out to determine in writing The Case for Miracles. I’ve done the investigation; I’ve made the case; I’ve rendered my verdict. Now’s your opportunity to explore the evidence and render yours.

Excerpted with permission from The Case for Miracles by Lee Strobel, copyright Lee Strobel.

Watch the Trailer: The Case for Miracles

Do you believe in miraculous events straight from the hand of Jesus? Put more personally, do you believe that God will work miracles in your own life? Come share with us on our blog. We would love to hear from you! ~ Devotionals Daily