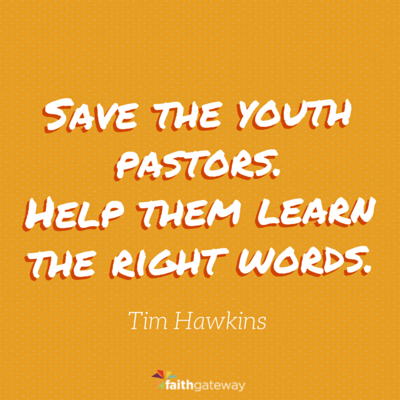 There are not many things I regret, except that I sometimes have so little to regret.

This sort of regret is almost exclusively reserved for Christian kids who grew up in church. Youth group culture is truly a micro-culture, complete with its own unique dialect, musical artists, and fashion trends. (I still own my old “To Hell with the Devil” T-shirt from my very first Stryper concert.)

For the Christian kid, any opportunity to drop a faux curse word was the greatest of all thrills. We had a plethora of phrases that incorporated all the four-letter words our “secular” friends were using so sinfully, but in completely different and creative ways. It was like an art form:

I remember it like it was yesterday. We had to start small and build up slowly — these were dangerous waters and getting it wrong could cost one dearly. We would always start with the word hell, but in a purely geographical sense. Some people get confused about this and try to use it in other ways. Specifically, I always found it odd how people often use the phrase “fun as hell.” Which part exactly are they referring to? Do they mean the “eternal torment” fun or the “lake of fire” fun? Just curious. Look, stick with geography — that’s the secret.

The devil goes straight to hell. Simple. True. Impervious to judgment. Theologically sound. Saying this would perk the ears of my mother, but upon further review, would keep me from any trouble whatsoever. But we would never stop there. Christian cussing was like a drug — not to be confused with actual drugs. We would never try those.

The next word a Christian kid could use was damn, but only used in the same sense as hell — geographical. And of course, the entire phrase had to always refer to the devil. That was just another one of the necessary components to successful Christian cussing. Talk about the devil and everything stays clean. Yes. The irony here is thick. The devil is damned to hell.

Whew, that was close. By this point, any respectable youth “groupee” would be nursing a nervously holy sweat. Said sentence was now teetering like a highly stacked game of Jenga. Now the stakes were high and one bad move could land a clean Christian kid a dirty mouthful of soap.

But we just couldn’t stop. The next addition had to be perfectly and delicately placed. It was a true biblical word and could only work if one had the grammatical creative chops to Christian cuss at this level.

The devil will ride on a jackass when he is damned to hell.

The trifecta complete, a masterpiece of brilliant aprofanity was born. Elegant. Sophisticated. Obviously logical — I mean, of course Lucifer would be riding a stubborn donkey on his journey to experience the flames of eternal damnation. Why would he not?

Of course, there was always the occasional overzealous youth pastor who would get a little too froggy with the Christian cussing. Amateurs. This was fire we were playing with and those who approached the flames haughtily were begging to get burned — or fired. See what I did there?

Usually, the target the young pastor was shooting for went something like this: “I don’t want to scare you into heaven, but I do want to scare the hell out of you.” Masterful? Nah. Solid? I suppose. It had theological soundness, but definitely lacked the subtle nuances used by the greats. But all in all, it would suffice to ruffle Sister Mildred’s feathers, yet leave the young preacher with complete plausible deniability.

But unfortunately, on more than one occasion the whole attempt was botched and well-meaning young men were left searching for secular employment. Casualties of the dangerous craft of Christian cussing. “I don’t want to scare you into heaven, but I will scare the hell out of that jackass devil… wait!”

I have actually spearheaded a movement to provide a list of appropriate Christian cuss words for the vast majority of the religious populace who are just not ready to try the real words and succeed.

How many youth pastors have to lose their jobs before we change the system? Thus, I actually requested from my Facebook and Twitter followers that they submit their favorite words of this persuasion. And I received over ten thousand replies from you freaks.

So with a little help from my friends, I have compiled a list of the top 100 Christian cuss words that will suffice to help you express yourself, yet not develop too much of a testimony while doing so. The best method is to read this as fast as possible out loud in order to really gain a feel for flow and discover which ones work best for you.

Save the youth pastors. Help them learn the right words. [tweet this]

Tweet Thought @timhawkinscomic Is it “up the wazoo” or “out the wazoo”? I’m working on a Common Core math problem.

Tweet Thought @timhawkinscomic A friend will stick closer than a brother, and a brother will hit you with a stick.

Watch the Video for Diary of a Jackwagon

Excerpted with permission from Diary of a Jackwagon by Tim Hawkins, copyright Thomas Nelson.

What are your favorite Christian cuss words? Come share with us on our blog… for the sake of youth pastors.