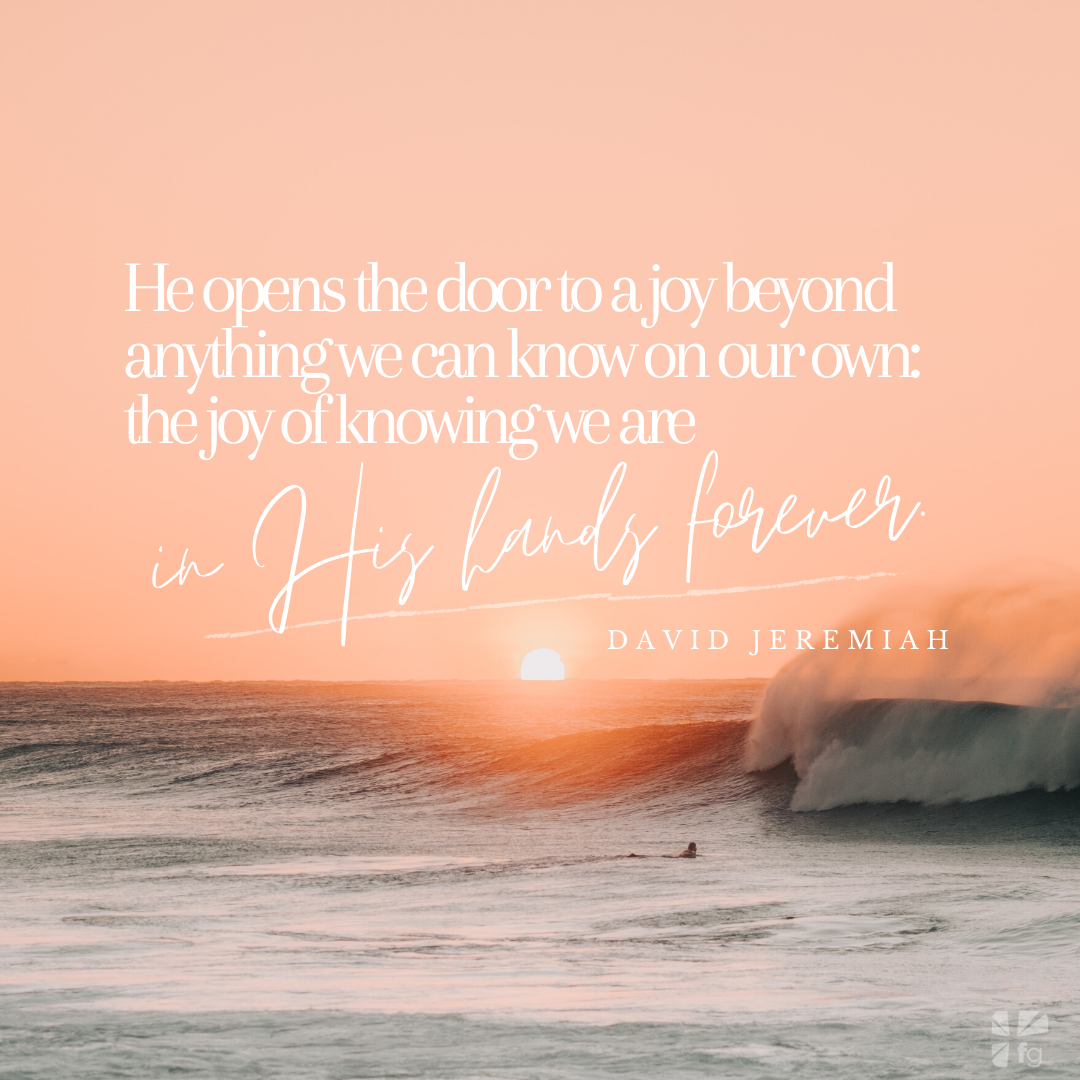 The Christian life is marked by notable milestones, and you’ll find joy in every one of them. Remember, just because something is important and serious doesn’t mean it can’t also be filled with joy and the beauty of deep, abiding contentment.

The moment of salvation is inexpressibly joyous. This is our eternal, spiritual delivery from separation from God and our entry into the kingdom of God. Jesus came so that we might be saved, and the New Testament testifies that this experience is an occasion for joy — for those converted and for those involved in the process. Many tears of joy have been shed when someone estranged from God, or who has been an enemy of God, has become His adopted son or daughter.

In Luke 15, Jesus told three stories of precious things that are lost and then found, and each is an occasion for joy: the shepherd who left ninety-nine sheep to search for and find one lost lamb; the woman who lost a valuable coin and found it; and the prodigal son, who was lost but finds his way home. In each story Jesus spoke of the rejoicing that surrounds the saving of one soul, and He described the joy that results:

I say to you that likewise there will be more joy in heaven over one sinner who repents than over ninety-nine just persons who need no repentance. — Luke 15:7

After the Ethiopian eunuch was saved, he went on his way rejoicing (Acts 8:39). Luke recorded the conversion of the Gentiles “caused great joy to all the brethren” (Acts 15:3). The Philippian jailer and his family were filled with joy when they became believers in God (Acts 16:34). Never doubt that salvation, the most profound of new beginnings, is also infused with joy beyond description.

Ask most Christians which is the most joyful event in a church service, and many will say baptism. Joy surrounds baptism.

Years ago, when I was a pastor in Indiana, I became friends with another pastor who told me amazing stories of God’s work in his congregation. One Sunday, as he was preaching, a homeless man came into his church and sat down in the front. He listened to the gospel message intently, and at the end of the service, he gave his heart to the Lord.

This church practiced immediate baptism. If you became a Christian, they baptized you that same day at the close of the service. According to my friend, this man was so joyful about his conversion and baptism that he came up out of the water, threw both hands in the air, and shouted, “Hot dog! Hot dog!” He hadn’t learned to say, “Amen,” “Praise the Lord,” or “Hallelujah.” All he knew was “Hot dog! Hot dog!” My friend said that was one of the most joyous days he could remember as a pastor.

Christian joy shows up not only in the happy times but also in times of trial and discouragement. Jesus’ joy survived troubles and even flourished in the midst of them. He told His followers:

Blessed are you when men hate you, and when they exclude you, and revile you, and cast out your name as evil, for the Son of Man’s sake. Rejoice in that day and leap for joy!” — Luke 6:22-23

The writers of the epistles followed Jesus’ lead:

You received the message with joy from the Holy Spirit in spite of the severe suffering it brought you. — 1 Thessalonians 1:6 NLT

My brethren, count it all joy when you fall into various trials. — James 1:2

One of my favorite Bible stories is the story of Paul and Silas in the Philippian jail. They were beaten; they were imprisoned; and who knew what would happen to them the next day?

But at midnight Paul and Silas were praying and singing hymns to God, and the prisoners were listening to them. — Acts 16:25

The kind of joy that gets you singing in jail at midnight with your back bleeding and your life hanging by a thread — that’s joy worth cultivating!

In our culture of instant gratification and constant amusement, it’s hard to understand the suffering the apostles endured for the sake of the gospel. We’ll do anything to avoid trials and tribulations. But often, in an attempt to keep anything uncomfortable from touching us, we miss the very thing God wants to use to lead us to the joy in Him. We can’t avoid difficulties, but in the midst of all our troubles — there is God and His effervescent love.

This doesn’t mean we deny or disguise our feelings. It doesn’t mean we can or should shrug off pain or disappointment, or try not to feel sorrow when we have good cause. It means we place our trust in God, and He opens the door to a joy beyond anything we can know on our own: the joy of knowing we are in His hands forever.

Commenting on the New Testament’s command that we’re to rejoice and be glad when undergoing trials, Philip Yancey said:

By using words like “Rejoice!” the apostles were not advocating a spirit of grin-and-bear-it or act-tough-like-nothing-happened. No trace of those attitudes can be found in Christ’s response to suffering, or in Paul’s…

Nor is there any masochistic hint of enjoying pain. “Rejoicing in suffering” does not mean that Christians should act happy about tragedy and pain when they feel like crying. Rather, the Bible aims the spotlight on the end result, the productive use God can make of suffering in our lives. To achieve that result, however, He first needs our commitment of trust, and the process of giving Him that commitment can be described as rejoicing.1

Christian joy is so complete and lasting that it stays with us even when we are dying.

Tony Snow was one of America’s most successful and respected newsmen and commentators. He rose from an op-ed writer and editor for a small newspaper to become a voice on ABC’s Good Morning America and other network shows. His career took off when he moved to Fox News as host of his own show and was a frequent commentator on others. In 2006, President George W. Bush appointed Snow to be his White House press secretary. Though popular, knowledgeable, and highly articulate, he was forced to resign less than two years later when he was diagnosed with terminal colon cancer. He died the following year at fifty-three.

Tony Snow could have died a bitter man, angry at how his brilliant career was cut short at its peak and how cancer deprived him of life with his wife and three children. But Tony was a devout Christian. Far from being angry at God, he found joy in the unexpected blessing his illness brought him. He communicated this joy eloquently in an article published a few months before his death.

God relishes surprise. We want lives of simple, predictable ease — smooth, even trails as far as the eye can see — but God likes to go off-road. He provokes us with twists and turns. He places us in predicaments that seem to defy our endurance and comprehension — and yet don’t. By His love and grace, we persevere. The challenges that make our hearts leap and stomachs churn invariably strengthen our faith and grant measures of wisdom and joy we would not experience otherwise…

The mere thought of death somehow makes every blessing vivid, every happiness more luminous and intense. We may not know how our contest with sickness will end, but we have felt the ineluctable touch of God.2

As Paul contemplated the conclusion of his life and ministry, he anticipated the joy that would be his at the end:

But none of these things move me; nor do I count my life dear to myself, so that I may finish my race with joy. — Acts 20:24

According to the apostle Peter, this joy is “inexpressible” (1 Peter 1:8). From his captivity on the Isle of Patmos, John the apostle affirmed this dying joy:

Blessed are the dead who die in the Lord. — Revelation 14:13

G.K. Chesterton believed this joy is “the gigantic secret of the Christian.”3 And I believe he’s right. Joy that thrives from the moment of our salvation to the moment of our death cannot be found outside of Christ! And what God desires for us, He also provides for us.

Excerpted with permission from A Life Beyond Amazing by David Jeremiah, copyright David P. Jeremiah.

Watch: A Life Beyond Amazing

Where is your joy, friend? Are you rejoicing though you may be tired, troubled, in difficult circumstances, and even suffering? Come share with us about the joy of the Lord on our blog. We want to hear from you about the indescribably joy Jesus has to offer! ~ Devotionals Daily