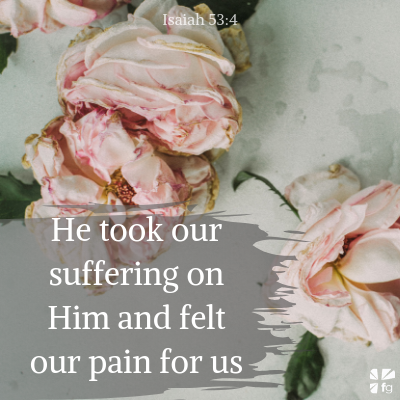 Carrying His own cross, Jesus went out to a place called The Place of the Skull… There they crucified Jesus. They also crucified two other men, one on each side, with Jesus in the middle. — John 19:17-18

God between two thieves. Exactly the place He wants to be. Three men on three crosses, a well-known scene. Even casual students of Christ are acquainted with the trio on Skull’s Hill. We’ve pondered their sufferings and sketched their faces and analyzed their words.

But let’s imagine this scene from another perspective. Rather than stand on ground level and look up, let’s stand at the throne of God and look down. What does God see? What is the perspective of Heaven? Does God see the timber and nails? Does God witness the torn flesh and spilt blood? Can Heaven hear the mallet slam and the voices cry?

I wonder if we can understand the impact our sin has in Heaven. We get a clue in Revelation 3:16 when Jesus threatens to spit the lukewarm church out of His mouth. The verb literally means “to vomit.” Their sin, excuse the phrase, made God want to puke. Their acts caused him, not just distaste, but disgust.

Haven’t you felt the same? Haven’t you witnessed the horror of a human act and wanted to throw up? On last night’s news broadcast the story was told of a ten-year-old boy who’d been allegedly set afire by his father. The man had stuffed tissue down his son’s T-shirt, covered the boy with lighter fluid, and set him aflame. Why? Because the boy had taken some of the father’s food stamps. Doesn’t such a story disgust you? Make you angry? And if we, who are also sinners, have such a reaction, how much more should a holy God? After all, it is His law being broken. His children being abused. His word being ignored. His holiness being insulted. The question is not, “Couldn’t God overlook sin?” The question instead is, “How in the world is forgiveness an option?” The question is not why God finds it difficult to forgive, but how He finds it possible to do so at all.1

They were leaving this earth hostile to God, defiant of his truth, and resistant to his call.

When people’s thinking is controlled by the sinful self, they are against God. — Romans 8:7

Sin is not an unfortunate slip or a regrettable act; it is a posture of defiance against a holy God.

Such is what Heaven sees.

The figure on the center Cross, however, has no such shadow of sin.

When He lived on earth, He was tempted in every way that we are, but He did not sin. — Hebrews 4:15

The first criminal reads the sign that announces Jesus as the king of the Jews. He hears Jesus pray for those who kill Him. Something about the presence of the Carpenter convinces him he’s in the presence of a King.

The other crook has a different opinion. “Aren’t you the Christ? Then save yourself and us” (Luke 23:39). You’d think a man near death would use his energy for something other than slander. Not this one. The shadow over his heart is so thick, even in pain he mocks.

Suddenly someone tells him, “You should fear God!” It’s the voice of the first criminal.

Finally someone is defending Jesus. Peter fled. The disciples hid. The Jews accused. Pilate washed his hands. Many could have spoken on behalf of Jesus, but none did. Until now. Kind words from the lips of a thief. He makes his request.

Jesus, remember me when You come into Your Kingdom. — Luke 23:42

The Savior turns His heavy head toward the prodigal child and promises,

Did an angel move, did a demon stir as they witnessed the answering of the prayer? The sins of the thief (and all us thieves!) leave him and go to Jesus. Tiny specks at first, then large flakes, and finally layers of filth. Every evil thought. Each vile deed. The thief’s ravings. His cursings. His greed. His sin. All now covering Jesus Christ. What nauseates God now covers His Son.

At the same instant, the purity of Jesus lifts and covers the dying thief. A sheet of radiance is wrapped around his soul. As the father robed the prodigal, so now Christ robes the thief. Not just with a clean coat but with Jesus himself!

Baptized into union with Him, you have all put on Christ as a garment. — Galatians 3:27 NEB

It is eternity’s most bizarre exchange. Paul explained it like this:

Christ took away the curse the law put on us. He changed places with us and put Himself under that curse. — Galatians 3:13

When He sees sin, a just God must either inflict punishment or assume it. God chose the latter. On the cross

God was in Christ, making peace between the world and Himself. — 2 Corinthians 5:19

I know John says that Jesus was carrying His own Cross as He walked up the hill, but He wasn’t. He was carrying ours.

The only reason He carried the Cross was for us thieves and crooks.

Christ had no sin, but God made Him become sin so that in Christ we could become right with God. — 2 Corinthians 5:21

A beautiful illustration of this came my way, even as I was writing this chapter. In between the composition of the two paragraphs above, I received a call from a friend named Kenny. He and his family had just returned from Disney World. “I saw a sight I’ll never forget,” he said. “I want you to know about it.”

He and his family were inside Cinderella’s castle. It was packed with kids and parents. Suddenly all the children rushed to one side. Had it been a boat, the castle would have tipped over. Cinderella had entered.

Cinderella. The pristine princess. Kenny said she was perfectly typecast. A gorgeous young girl with each hair in place, flawless skin, and a beaming smile. She stood waist-deep in a garden of kids, each wanting to touch and be touched.

For some reason Kenny turned and looked toward the other side of the castle. It was now vacant except for a boy maybe seven or eight years old. His age was hard to determine because of the disfigurement of his body. Dwarfed in height, face deformed, he stood watching quietly and wistfully, holding the hand of an older brother.

Don’t you know what he wanted? He wanted to be with the children. He longed to be in the middle of the kids reaching for Cinderella, calling her name. But can’t you feel his fear, fear of yet another rejection? Fear of being taunted again, mocked again?

Don’t you wish Cinderella would go to him? Guess what? She did!

She noticed the little boy. She immediately began walking in his direction. Politely but firmly inching through the crowd of children, she finally broke free. She walked quickly across the floor, knelt at eye level with the stunned little boy, and placed a kiss on his face.

“I thought you would appreciate the story,” Kenny told me. I did. It reminded me of the One you and I have been studying. The names are different, but isn’t the story almost the same? Rather than a princess of Disney, we’ve been considering the Prince of Peace. Rather than a boy in a castle, we’ve looked at a thief on a cross. In both cases a gift was given. In both cases love was shared. In both cases the lovely one performed a gesture beyond words.

But Jesus did more than Cinderella. Oh, so much more.

Cinderella gave only a kiss. When she stood to leave, she took her beauty with her. The boy was still deformed. What if Cinderella had done what Jesus did? What if she’d assumed his state? What if she had somehow given him her beauty and taken on his disfigurement?

That’s what Jesus did.

He took our suffering on Him and felt our pain for us… He was wounded for the wrong we did; He was crushed for the evil we did. The punishment, which made us well, was given to Him, and we are healed because of His wounds. — Isaiah 53:4-5

Make no mistake: Jesus gave more than a kiss — He gave His beauty. He paid more than a visit — He paid for our mistakes. He took more than a minute — He took away our sin.

Excerpted with permission from A Gentle Thunder by Max Lucado, copyright Max Lucado.

Imagine being that disfigured boy, ostracized from the group, longing for notice. Imagine Jesus walking towards you to kiss and embrace you and leaving His righteousness and beauty on you because He loves you so much! Come share your thoughts with us on our blog. We want to hear from you! ~ Devotionals Daily