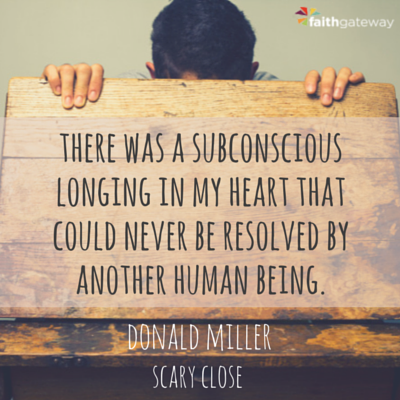 When I was a kid I remember seeing the movie Jerry Maguire. There is a famous scene in the movie in which Jerry Maguire tells Dorothy Boyd that she completes him. That scene was all the rage back then and couples everywhere were saying it to each other in coffee shops and bars. Even I thought it was a beautiful sentiment. But now that I’m older and smarter, I have a new name for it: codependency.

I didn’t know anything about codependency before going to Onsite [for therapeutic and personal growth workshops and intensives that address core, underlying issues that keep individuals, couples and families stuck in dysfunctional patterns], and even after I heard it defined I didn’t realize I struggled with it myself, but I did. And it cost me relationship after relationship.

Codependency happens when too much of your sense of validation or security comes from somebody else. [tweet this]

Now that I know what it is, I can spot it pretty easily. If somebody obsesses over whether another person likes them or returns an e-mail or whatever, it’s a symptom of codependency, though a mild one. Stalking would be a scarier version of the same tendency.

Our group therapist created a terrific visual example of what a healthy relationship looks like. She put three pillows on the floor and asked a couple of us to stand on the pillows. She told us to leave the middle pillow open. She pointed at my pillow and said, “Don, that’s your pillow, that’s your life. The only person who gets to step on that pillow is you. Nobody else. That’s your territory, your soul.” Then she pointed at my friend’s pillow and told her that was her pillow, that she owned it and it was her soul. Then, the therapist said, the middle pillow symbolized the relationship. She said that both of us could step into the middle pillow any time we wanted because we’d agreed to be in a relationship.

However, she said, at no point is it appropriate to step on the other person’s pillow. What goes on in the other person’s soul is none of your business. All you’re responsible for is your soul, nobody else’s. Regarding the middle pillow, the question to ask is, “What do I want in a relationship?” If the pillow you two step on together works, that’s great. If not, move on or simply explain what you’d like life to feel like in the middle pillow and see if the other person wants that kind of relationship too. But never, she said, ever try to change each other. Know who you are and know what you want in a relationship, and give people the freedom to be themselves.

I wish I’d have heard that in my twenties.

In a way, that’s the difference between my relationship with Betsy and my relationships with all the other girls. Because I know which pillow is mine and which pillow is hers, I hold Betsy loosely. If she wants to leave she can go. I’m responsible for my own health and happiness, and I’m responsible to ask what I want in a relationship and to try to make the middle pillow comfortable and safe for her, but that’s it. Of course we will stand and make promises to each other at our wedding but even then, even with a spouse, I’ve come to believe a person’s love for you can’t grow unless you hold that person loosely.

I don’t want you to misunderstand me: I love Betsy more than any woman I’ve ever met and I believe I always will. But this is a healthy love, not the needy love I’ve experienced in the past. Before, I’d try to control whoever I loved so she couldn’t get away. Much of it was passive control, but it was there all the same. I used fear and guilt and shame to close my fingers around my girlfriend’s heart, and without exception I killed whatever love could have grown.

I now know there were two dominant influences that caused me to clench my fist. The first was the fact I was trying to use women to heal old wounds, and the second was the false assumption I could be made complete by any of these women in the first place.

Another paradigm shift that allowed me to finally have a healthy relationship was theological. I realized there was a subconscious longing in my heart that could never be resolved by another human being.

Certainly Betsy could resolve my longing for an intimate companion, but I’m talking about something deeper. Some people think of it as the longing for God, and I think they’re on to something. In my opinion, though, that longing will never be satisfied in our lifetime. In other words,

I’m convinced every person has a longing that will never be fulfilled and it’s our job to let it live and breathe and suffer within it as a way of developing our character.

I remember growing up in church hearing about how there was a hole in our hearts that could only be filled by Jesus, but later in life when I became a Jesus guy myself I continued to experience the longing. He simply wasn’t doing it. The experience was so frustrating I almost walked away from faith.

Later, though, I read in the Bible about how there will be a wedding in heaven and how, someday, we will be reunited with God. The Bible paints a beautiful picture of a lion lying down with a lamb, of all our tears being wiped away, of a mediator creating peace and a King ruling with wisdom and kindness. The language is scattered and often vague, but there’s no question something in the souls of men will be healed and perhaps even made complete once we are united with God and not a second before. What differentiates true Christianity from the pulp many people buy into is that Jesus never offers that completion here on earth. He only asks us to trust Him and follow Him to the metaphorical wedding we will experience in heaven.

The more I thought about it, the more the Bible made sense. Early followers of Jesus experienced pain and trial and frustration, hardly the romantic life. But they consoled each other and took care of each other and comforted each other in the longing.

In my opinion the misappropriation of the longing for God has caused a lot of people a great deal of pain. [tweet this]

In fact, I wondered if some of my early mistakes in relationships weren’t partly because I sought to find resolution for the longing through a woman, a burden no romantic partner should have to bear. How many relationships have been ruined by two people attempting to squeeze the Jesus out of each other?

Early in our relationship Betsy and I talked about this dynamic and decided we wouldn’t fall for it. We knew we would each experience an unresolved longing neither of us would be able to fulfill. We came to see this as a positive rather than a negative. The fact we couldn’t be tricked into resenting each other for not healing each other’s deepest wounds might be the difference between our relationship and the many that have crashed and burned.

I would imagine there were some who wondered if Betsy and I didn’t think we could fulfill each other, why we’d get married in the first place. But for me, the answer to that question is simple: we both get somebody to share the longing with.

I don’t mind the longing. The longing is beautiful. I just don’t want to feel it alone anymore. I want to share it with Betsy.

In your relationships (dating, marriage, friendship) are you free? Is the other person free? Many of us (I’m raising my hand high!) tend towards graspiness, clinginess, and other words we use to avoid calling it what it actually is — codependency. How can we better recognize when we’re not free to have our own soul, life, and separate personhood and have no one trample on it, and when we’re trampling someone else’s personhood? Come join the conversation on our blog! We’d love to hear from you about loving others with an open hand rather than clutching on in a way that kills love! ~ Laurie McClure, FaithGateway Women