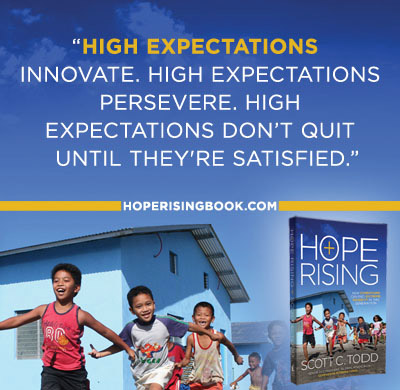 The hotel bed sagged like a hammock under my jet-lagged body. My Timex beeped out the mantra, “Get up! The only time zone that matters is mine.” I rolled off the bed in reluctant obedience and staggered to the bathroom. The sulfuric smell of the nation’s sewer escaped the toilet, an unsubtle reminder of my distance from home.

I reached into the shower to crank on the water fully to the red side. Liquid burps and blasts spluttered from the showerhead. I waited for it to turn hot. It didn’t. It wasn’t cold-cold, just room temperature cold. “Just the way it is, I guess,” I grumbled to myself and stepped in.

About seventy-eight seconds later, I grabbed a towel, which unfolded to reveal a large, yellowish-brown stain. Apart from air-drying, this degenerate towel was my one and only option, and I was already late. I dried off with a wary eye on the stain, dressed, and embarked on my day in Jayapura City on the easternmost island of Indonesia.

I knew I was in a poor city, but I still expected hot water and a clean towel. Not that I was aware of that expectation.

Most of our expectations lurk below the surface of our conscious thoughts. They’re there. No matter what time zone we’re in or where we sleep, they’re our traveling companions. When they’re unmet, we get frustrated. We want an explanation.

I can hardly imagine what would happen in my house if my four boys came downstairs on a Christmas morning to discover that the tree had been abducted during the night, and there wasn’t a present in sight. I would face a pajama-wearing, watery-eyed inquisition. My four-year-old would probably cry.

What if your employer said your next paycheck wouldn’t be issued? What if your car didn’t start? What if you were eager to watch your favorite football team, and the network showed the Florida shuffleboard championship instead? What if your son decided not to go to college? What if you were on the toilet, and you looked over to see only two squares of paper left on the roll? What if you had found your refrigerator inexplicably empty this morning? Did you expect to eat today?

Expectations are everywhere, and they exist whether you want them to or not. They escort every thought, and they set life’s agenda. They are on the pillow next to us each morning. The sun will come up. I will eat. My car will start. My employer will pay me. My shower will spray hot water. My toilet paper roll will have more than two squares.

If these things don’t happen, then our normally docile mental escorts become arsonists, lighting fires of frustration and discontent, starting riots and noisily demanding answers. Or, in mild situations such as insufficient toilet paper, they may at least mutter complaints.

Marriage counselors tell us that most of our conflicts arise from unmet expectations: She expected me to take out the trash. She expected me to remember our anniversary. She did not expect me to buy a boat without talking to her (I would never). Most challenges in work relationships are also rooted in unmet expectations. Your boss expected you to be at your desk on time. Maybe he wanted your project done by this morning but didn’t make that clear when he assigned it to you. Maybe you expected him to communicate more clearly and own up to his mistakes.

Wishful thinking is a fantasy. Optimism is a mere attitude. Expectations, on the other hand, are probable, seemingly inevitable scenarios for our futures. Expectations provide a scaffold for our decision making, and we gamble on them every day.

I’ve mentioned a lot of mundane expectations, but what about the big ones, such as war and hunger?

I’ve heard good people say things like, “I mean, we should help the poor and care for the ones we can, but setting unrealistic expectations that we can end poverty will just come back to bite us.”

I got back to my hotel in Jayapura City after fourteen hours of traveling to remote villages, sitting on dirt floors, and holding hands with barefoot children in tattered shirts. The heat, sweat, dust, and grime of the day clung to me. I again faced the burping shower, but this time with much more “realistic” (a.k.a. low) expectations. I cranked the handle fully to the red side again and waited. It produced the same unhappy result.

I had spent the day with kids whose parents had died. Who lived in places I couldn’t pronounce. Places that did not have clean water to drink, let alone the luxury of a shower. They didn’t have electricity or beds. I felt guilty as I stared at that burping showerhead – guilty that I could return to a hotel, guiltier still about my frustration over not having hot water. I’m not saying I should have felt guilty, but I did.

I don’t know why, but I decided to crank the lever all the way over to blue. Maybe I thought I would take a cold shower as an act of solidarity or penance. Suddenly the water became piping I held my hand in the hot mist. What an idiot, I thought. I began my day frustrated that no matter how hard I cranked the handle, I couldn’t get the hot water I expected from the red side. I never bothered to try blue. I briefly wondered if blue really meant hot in Indonesia. Then I decided that the guy who installed the lever put it in backward. Maybe that worker didn’t have the daily opportunity to decide which way to crank his shower handle. Maybe he assumed that anyone could figure it out.

Looking back, I realize something important: I was not the victim of unmet expectations that morning. At first, I thought I expected hot water and got lukecold water. But I hadn’t, really. I had taken cues from my environment. I had listened to the testimonies of the sulfuric gasses from the toilet and of the burping showerhead. They told me that this place might not have hot water. So I was in fact the victim of low expectations – I got the cold water I expected. If I had expected hot water, I would have been relentless in my effort to get it. I would have certainly explored the blue side rather than believing a cold shower was just another bit of reality.

Excerpted with permission from Hope Rising: How Christians Can End Extreme Poverty in this Generation by Scott Todd, copyright Thomas Nelson, 2014.

Do you think it’s possible to end poverty in this lifetime? Why or why not? How have low expectations (which we might have previously thought of as high or unmet expectations) affected what the Church is accomplishing world-wide? How about in your personal and family life? Come join the conversation on our blog! We would love to hear from you! ~ Devotionals Daily 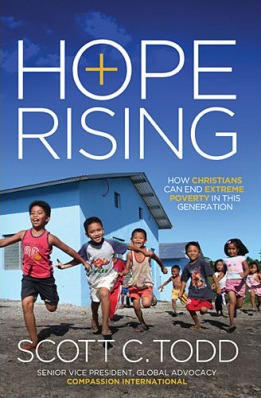