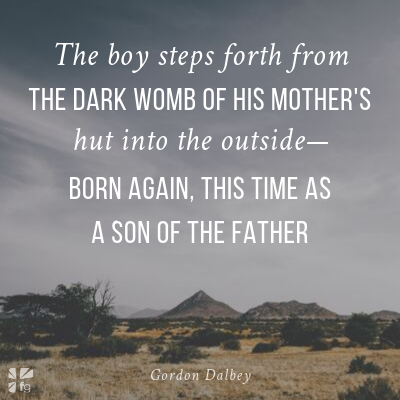 [Jesus’] parents were astonished when they saw Him, and His mother said to Him, “Son, why have you done this to us? Your father and I have been terribly worried trying to find You.” He answered them, “Why did you have to look for Me? Didn’t you know that I had to be in My Father’s house?”
— Luke 2:48-49

Early in the fall of 1964, at the adventurous, indestructible age of twenty, I received an invitation from the U.S. Peace Corps to teach mathematics at a boys’ high school in Nigeria. Equipped with my bachelor’s degree in that subject, including a minor in physics, I had soon set out for the “Dark Continent,” asking not what my country could do for me, but how I could share the boons of Western civilization with other, apparently less fortunate people.

After several months of teaching young African men about congruent triangles, however, I was startled — and appropriately humbled — by a simple question while chatting with a student about American families.

“How is it in America that a boy is called by the men?” he asked matter-of-factly. I hesitated, assuming my student wasn’t using proper English. “What do you mean?”

“In your own village in America,” he replied, “how did the men come for you, when you were reaching the proper age to come out from your mother’s house?”

“Oh,” I exclaimed, smiling graciously, “in America, unlike here in your village, we don’t have polygamy. The mother and father both live in the same house, so that sort of thing really isn’t necessary.”

Clearly puzzled by my response, the young man moved as if to speak, hesitated, and then sat quietly, knitting his brow. Unsure what more to say, I changed the subject.

Fortunately — though I couldn’t appreciate it at the time — I had occasion later to ask a Nigerian teacher to describe for me his own initiation rite as a boy of the Ibo tribe. Like a seed planted in dry ground, his story remained dormant in my mind and heart for over twenty years, until at last I began to soak in the fraternal longings of my fellowmen. Today, I treasure it, sharing it as often as possible.

When I do share it, I wish I could contact that student who asked me the question, which I, in my cultural deprivation, simply had no way of understanding at the time. For I’ve had to face the sad fact that an estimated 30 to 40 percent of American boys now live in their mother’s home, apart from where the father lives. From the boy’s perspective, the effects of polygamy are similar to those of our modern “serial monogamy,” as one Ibo friend of mine caricatured today’s American families.

In the rural village where my Nigerian friend lived, the father, who often has several wives, lives by himself in his own hut, while his wives each have their own hut nearby. A boy lives with his mother until he reaches the proper age, usually about twelve. The father has been watching his son grow, and when he decides the boy is ready, he goes to the village elders to officiate this sacred rite of passage.

In America, we eliminate men from productivity when they reach age sixty-five to make way for younger men — who move into positions of authority with gaping wounds that can be healed only by a blessing from the same older men they have dismissed. Among Ibos, however, the older a man gets, the more valuable he becomes, the more authority he gains. Old Ibo men are not paid; they make the currency — which is simply the blessing of manhood.

And so, one evening the village elders and the boy’s father appear just beyond the yard outside the mother’s hut, together with a drummer and a man wearing a large mask over his head.

The Ibo word for “mask” is nmoo — the same as that for “spirit.” As the masked man steps out first from among the men, both to call the boy out and to usher him from the mother to the men, the spiritual dimension of manhood is understood from the outset as primary and essential. Granted, these Ibo men were calling upon the wrong spirit — but they were beckoning the true man. Sadly, we Christian men, who know the right Spirit, have not recognized the true man in our sons — that is, their longing to become valid men — because we have not allowed the Spirit to voice His cry for “Daddy” in ourselves (see Romans 8:15-16). Indeed, Ibo men understand this foundational truth, so elusive to Western scientific men:

It is the Spirit who initiates the call to manhood.

And so, quick and loud drumbeats signal the mask/spirit to leave the company of men and step out into the “compound” or empty space of about twenty yards between the mother’s hut and the forest. No man dare follow the nmoo; this is a job for the spirit. For some time, he dances around, claiming the territory for the men.

When the spirit is ready, the nmoo nods to the drummer, who responds with sharp staccato raps. The mask/spirit then rushes to the mother’s door and beats upon it loudly: Bam! Bam! Bam!

He retreats for a moment, then again charges the door — continuing to retreat and then charge forward to announce his presence and intention — until the mother appears.

She slams her door, and the men take up their chant louder, with greater determination: “COME OUT! SON OF OUR PEOPLE, COME OUT!” Once again, the nmoo charges her door and beats upon it heavily. Again the mother opens up, again she shouts her defiance, and again the men cry out for the boy.

How long does the drummer beat, the spirit Bam! and the men shout? As long as it takes. For these men know the biblical truth — tragically ignored by Western Christian men — that if the men shrink from their job and abandon the boy, a “curse” — prophesied in Malachi 4:6 — will be unleashed upon their village: Boys will grow up unable to feel like men, and shrink from the masculine calling to bless, to call forth giftings, to lead, to protect, and to serve. They will fear and ultimately dishonor true manhood because it stirs the shame of their inadequacy.

And so, louder the father and elders call, sharper the drum beats, more feverishly the mask/spirit dances, and more firmly the mother protects — until, finally, realizing that these men will persevere in their appointed task no matter what resistance they encounter — she yields and steps aside.

It is the moment of truth for every boy in the village.

Certainly, he’s already been awakened first by the drumming, and now the loud crashing against his mother’s door makes his heart pound with fear. Isn’t Mother’s place supposed to be safe from all things fearful?

Ah, but the call to manhood is an awesome thing. No mother can protect a boy from it. It’s like vertigo — the fear is not that someone will push you, but that you’ll jump.

Standing there before the threshold of his mother’s house, he hesitates. Beside and behind him holds all that is tender and reassuring and known and secure. Before him — and within him — cries out all that is sharp and powerful and clean and true.

Hesitantly, wanting but not daring to look at his mother, the boy steps forth from the dark womb of his mother’s hut into the outside — born again, this time as a son of the father.

Hearing this story at twenty, as a world traveler romantically “on my own,” I scoffed. Today, decades later, I weep. For I have grown strong enough to face what I and my fellow twenty-first-century Western males have lost. The pounding on your mother’s door, the cry of the man-affirming spirit to “Come out!,” the chorus of older men waiting to receive you, the father’s gift of tools and resources — all these tap deep, deep longings within me that words can’t express.

We’re lost males, all of us, cast adrift from the community of men, cut off from our masculine heritage — abandoned to machines, organizations, fantasies, drugs.

In the face of such realizations, I’m overwhelmed. How in the world — indeed, how in our world — can we Western men begin to rediscover this basic male need and meet it? If in fact the father is the key to a boy’s crossing the threshold into manhood, what can a man do if he had no father, or if his own father never called him out from his mother?

Certainly, a seed of hope may be found in the fact that the origin of manhood cannot lie in the father alone, but only in some greater masculine Source from which the father himself must draw. The father becomes the sole focus of manhood only in a society such as our own, which lacks bonds of male “tribal” fellowship — not in societies such as the Ibo village, where the boy’s father appears before the mother’s hut as part of a larger group of men, who themselves stand in the background behind the mask/spirit.

A man must beware the temptation to skirt the pain of being cut off from his father; to do so is to let that sin bind and control him from the deeper unconscious to which he banishes it. He must start where he genuinely is, however painful, if he is to get where he needs to go.

At the same time, he must beware the companion temptation to judge and condemn his father for what Dad didn’t give him. The man who confesses his pain by bringing it to Jesus at the cross will begin to see that his father was not called out by his own father, so he didn’t know how to call out his own son. Your father is not the oppressor, but a fellow victim, a brother in mutual need of manly affirmation. When a man allows Jesus to carry his tears for his own loss into tears for his father’s loss when the latter was also a boy, he’s begun to become a man of God at last.

Have there been men in your life to “call you out” into manhood? Or have you instead felt the pain from fatherlessness or from an absent father? How can you draw strength from knowing that your Heavenly Father is “calling you out” even now? We’d love to hear your thoughts in the comments!

A number of years ago, at a point in my own journey when I felt more lost than ever, I heard a talk given by Gordon Dalbey, who had just written Healing the Masculine Soul. He raised the idea that despite a man’s past and the failures of his own father to initiate him, God could take him on that journey to provide what was missing. A hope arose within me.