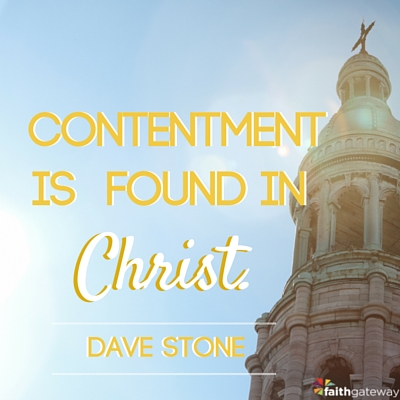 A first-century Roman proverb warns: “Money is like seawater: the more a man drinks, the thirstier he becomes.” Now, I don’t know if Jesus knew that saying — maybe He did. He certainly understood the principle, if His lifestyle is any indication. He kept it simple, trusted God, had what He needed, and didn’t covet more.

Do not conform to the pattern of this world, but be transformed by the renewing of your mind.

If that’s not clear enough, listen to the way the J. B. Phillips version paraphrases that verse: “Don’t let the world around you squeeze you into its own mould.”

It’s a challenge for us twenty-first century Western Christians, who have so many creature comforts. Our lavish lifestyle chips away at our dependence upon God. The Holy Spirit may be called the Comforter, but we don’t have much need to depend on His comfort. We’re self-made. We’re independent. We can take care of ourselves, thank you very much.

Author Francis Chan asks this question of American Christians: “Why would we need to experience the Comforter if our lives are already comfortable?”

The problem is, the kind of comfort we find through a life of luxury doesn’t offer the deeper level of contentment and joy found in a relationship with God. What the world gives is temporary and superficial, and it can vanish overnight, leaving us with nothing. But real contentment, as the apostle Paul discovered, isn’t contingent on finances, status, or possessions:

I can do all this through him [Christ] who gives me strength. — Philippians 4:13

This imperfect servant had matured to the point that his contentment wasn’t found in possessions; it was found in Christ.

Years ago, a small Albanian nun took the name Sister Mary Teresa and began working among the poorest of the poor in the slums of Calcutta. She washed the sores of lepers, nursed patients with tuberculosis, and gave hope and dignity to some of the forgotten of the world. For her work she was awarded the Pope John XXIII Peace Prize, the Nehru Prize for her promotion of international peace and understanding, and eventually the Nobel Peace Prize. She refused the $192,000 award, giving it instead to the poor people of India.

When Mother Teresa died at the age of eighty-seven, she reportedly left behind an estate that consisted of a prayer book and three saris. And a world that was changed because she followed the call of God.

Now, there’s nothing wrong with wealth. The Bible abounds with examples of wealthy and godly individuals — Abraham, David, Job, Nicodemus, Joseph of Arimethea, and Lydia, to name a few. But even though they knew prosperity, they still kept God as the priority. They used their position and possessions for the purpose of bringing glory to God.

If you’ve been blessed financially, then make certain you do the same.

Comfort vs. Contentment — it’s a tough topic for our hearts to wrestle with! Not many of us actually feel wealthy even though according to the stats across the globe about world poverty, we are. Money in and of itself isn’t bad. Having money isn’t bad. But, God made it clear in Scripture over and over again that it’s our heart about money that is the issue. Are we eager to do good with the resources God has entrusted to us? Is our true contentment found in God alone? Come share your thoughts with us on the blog! We want to hear from you!