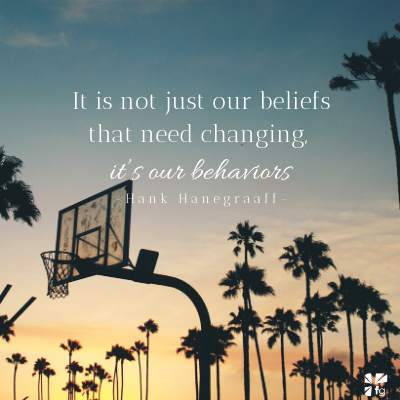 Reflections on the Value of Abstinence in the Christian Life

For four consecutive years (2015–18), the Cleveland Cavaliers played the Golden State Warriors in the NBA finals. LeBron James versus Stephen Curry. Had LeBron not left for the L.A. Lakers, that trend may well have continued in perpetuity. LeBron is by all accounts the best basketball player on the planet. Steph is the heir apparent.

LeBron, a four-time MVP, says he could see immediately that Curry was destined for stardom. He saw in Curry a wonderful blend of finesse, skill, drive, as well as the discipline and dedication necessary for greatness. I personally have witnessed all of that and more. Having played a fair amount of golf with Steph, I have seen his progress in that arena as well — today he is not only an NBA Superstar but arguably the best golfer in the NBA.

What seems automatic in the spotlight is the result of a lifetime of discipline. Years of regiment, exercise, study, diet, practice, practice, and more practice. That means that Steph has had to abstain from all sorts of appetites in order to master the game he loves. What Curry has accomplished in the physical realm Christians are called to accomplish in the spiritual realm. Abstinence is a living discipline by which we master our appetites for food, sex — even for our favorite pastime — so that we may partake of heavenly manna. Abstinence vitalizes our vigor, amplifies our affections, and compounds our contentment. While such things as food and sex are glorious gifts from God, little compares with mastery over the appetites that seek to master us.

Wishing does not win a race. Nor does it produce an NBA superstar. To compete in the games takes strict training. It takes disciplining the appetites — making them your slave. It’s wonderful to win an NBA championship, yet all such glory pales in comparison to experiencing communion with God. One is temporary. It will not last. The other is forever. Thus, like a coach, the apostle Paul urged his young protégé Timothy to forgo endless myths and legends and train hard in the gymnasium of life.

Prejudice against the spiritual gymnasium is breathtaking. To abstain from food, sex, a favorite sport, an evening cocktail, or even television is foreign to our sensibilities. We live in a self-indulgent culture in which feeling good is deemed to be of the highest value.

The apostles had a decidedly different perspective. Paul practiced abstinence because emulating Christ was the highest virtue. Thus, as Christ fasted, Paul fasted too. He lived and practiced the things his Lord had taught and practiced so that he might be empowered by God’s energies, not just his own. Many talk a good game. But what about the walk? If we are brutally honest with ourselves, more often than not we walk in the way of the world. How many of us can truly say that we “have crucified the flesh with its passions and desires”? Who among us can truthfully say that we are engaged in mastering those passions that for far too long have mastered us?

Giving assent to the truth propositions of the historic Christian faith is vitally important — truth matters. But mental assent and good intentions do not in and of themselves produce transformation. It is not just our beliefs that need changing; it’s our behaviors. If our habits remain the same, our lives will as well. I can’t tell you how many people have told me that they would dearly love to memorize Scripture. Few, however, are willing to embrace the disciplines necessary to carve the Scriptures into the canvas of their consciousness. Good intentions are many. Disciplines few. Steph Curry did not become the NBA’s “Baby-Faced Assassin” by accident. He yielded his members wholeheartedly to the rigors of the gym. We must do so as well.

We all have weaknesses that are essential to master.

NBA great Dwight Howard is a case in point. He can dunk a basketball with the best of them. Free throws are another matter. One of the reasons the Rockets lost to Curry and the Golden State Warriors during the 2015 NBA Western Conference finals was Howard’s inefficiency at the free throw line. The point is that Howard would be well served to discipline his weakness, even more than practicing his strengths.

Moreover, we must practice abstinence for the right reasons. We must not seek abstention from food and water in order to curry God’s favor. We abstain from food and water in order to experience union with God. I fear that a primary reason there is so little emphasis on fasting in the modern church is that it is perceived to be a warped monastic practice by which medieval Christians sought to attain righteousness apart from faith. One need only think back to Luther, who (prior to the Reformation) quite nearly killed himself in order to gain right standing before God. Afterward, he ruefully noted that extreme abstinence had quite likely done permanent damage to his digestive system.

The fact that “the just shall live by faith,” however, is hardly an excuse to give up on abstinence. No need to throw out the baby with the bathwater. Nor pour dirty water on the baby! Defect is no reason to disdain discipline. Neither should orthopraxy be sacrificed on the altar of orthodoxy. Doctrinal correctness is not a replacement for correct discipline — as though what we do and what we think have no bearing upon one another.

How much do you want to win the race set before you? What’s the goal? As believers, we must master the appetites that seek to master us. We were created to be set apart. Anything that comes between us as God has to be put in its place in favor of the greatest gift — Jesus Himself. Come share your thoughts with us on our blog. We want to hear from you! ~ Devotionals Daily