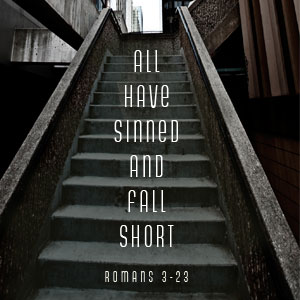 To make a start where we are, we must recognize that our world is not normal, but only usual at present. — DALLAS WILLARD

Community is the place where the person you least want to live with always lives. — HENRI NOUWEN

We are tempted to live under the illusion that somewhere out there are people who are normal. In the movie As Good As It Gets, Helen Hunt is wracked by ambivalence toward Jack Nicholson. He is kind and generous to her and her sick son, but he is also agoraphobic, obsessive-compulsive, and terminally offensive: If rudeness were measured in square miles, he’d be Texas. In desperation, Helen finally cries to her mother: I just want a normal boyfriend.

Oh, her mother responds in empathy, everybody wants one of those. There’s no such thing, dear.

When we enter relationships with the illusion that people are normal, we resist the truth that they are not. We enter an endless attempt to fix them, control them, or pretend that they are what they’re not.

One of the great marks of maturity is to accept the fact that everybody comes “as is.”

Of course, the most painful part of this is realizing that I am in the “as-is” department as well. Throughout history human beings have resisted owning up to that little tag. We try to separate the world into normal, healthy people (like us) and difficult people.

We all want to look normal, to think of ourselves as normal, but the writers of Scripture insist that no one is “totally normal” — at least not as God defines normal. “All we like sheep have gone astray,” they tell us. “All have sinned and fall short of the glory of God.”

One of the most ironic remarks about the Bible I hear from time to time is when someone says that it’s a book about pious, stained-glass characters who do not reflect the real world. I always know that means they haven’t read it. Have you ever noticed how many messed-up families there are in Genesis?

Cain is jealous of Abel and kills him. Lamech introduces polygamy to the world. Noah — the most righteous man of his generation — gets drunk and curses his own grandson.

Lot, when his home is surrounded by residents of Sodom who want to violate his visitors, offers instead that they can have sex with his daughters. Later on, his daughters get him drunk and get impregnated by him — and Lot is the most righteous man in Sodom!

Their marriages are disasters:

Abraham has sex with his wife’s servant, then sends her and their son off to the wilderness at his wife’s request. Isaac and Rebekah fight over which boy gets the blessing. Jacob marries two wives and ends up with both of their maids as his concubines as well when they get into a fertility contest.

Another son, Judah, sleeps with his daughter-in-law when she disguises herself as a prostitute. She does this because she is childless since her first two husbands — both sons of Judah — were so wicked that God killed them both; and Judah reneged on his obligations to her.

These people need a therapist.

Why does the writer of Genesis include all this stuff?

The writer of Scripture is trying to establish a deep theological truth: Everybody’s weird.

Because we know in our hearts that this is not the way we’re supposed to be, we try to hide our weirdness. Every one of us pretends to be healthier and kinder than we really are; we all engage in what might be called “depravity management.”

Every once in a while somebody’s “as-is” tag becomes high profile. A Pulitzer Prize-winning historian is guilty of plagiarism; a politician’s career explodes in sexual scandal; a powerful CEO resigns in disgrace over illegal document shredding. What’s surprising is not that such things happen; it’s that the general public response is, “Can you believe it? And they seemed so normal.”

The problem with the human race is not that we have just a few bad apples in our midst. Writers in the field known as abnormal engage in what psychology work hard to distinguish the abnormal from the normal among us. One of the dangers in studying the topic, sometimes called the “intern syndrome,” is that students start to see themselves in every diagnosis.

“There is almost no one who has not harbored secret doubts about his or her normality,” a recent textbook says. But writers in Scripture say that when it comes to the most important form of pathology, we are all in the same diagnostic category: “All we like sheep have gone astray…” From a spiritual perspective, our “secret doubts about our normality” have something important to tell us. As Neil Plantinga puts it, “In a biblical view of the world, sin is a familiar, even predictable part of life, but it is not normal. And the fact that ‘everybody does it’ doesn’t make it normal.”

From the time of Adam in the Garden of Eden, sin and hiding have been as inevitable as death and taxes. Some people are pretty good at hiding. But the weirdness is still there. Get close enough to anyone, and you will see it.

Everybody’s normal till you get to know them.

The Longing to Connect

The yearning to attach and connect, to love and be loved, is the fiercest longing of the soul. Our need for community with people and the God who made us is to the human spirit what food and air and water are to the human body. That need will not go away even in the face of all the weirdness. It marks us from the nursery to the convalescent home.

As frustrating as people can be, it’s hard to find a good substitute. A friend of mine was ordering breakfast during a recent trip in the South. He saw grits on the menu, and being a Dutchman who spent most of his life in Michigan, he had never been very clear on the nature of this item. So he asked the waitress, “What exactly is a grit?”

Her response was a classic. “Honey,” she said (in the South, waitresses are required by law to address all customers as “honey”), “Honey, they don’t come by themselves.”

Grits don’t exist in isolation. No grit is an island, entire unto itself. Every grit is a part of the mainland, a piece of the whole. You can’t order a single grit. They’re a package deal.

“Call it a clan, call it a tribe, call it a network, call it a family,” says Jane Howard. “Whatever you call it, whoever you are, you need one.” It is not good for man to be alone. Dallas Willard says, “The natural condition of life for human beings is reciprocal rootedness in others.” Honey, you don’t come by yourself.

Neil Plantinga notes that the Hebrew prophets had a word for just this kind of connectedness of all things: shalom — “the webbing together of God, humans, and all creation in justice, fulfillment, and delight.” Try to imagine, the old prophets told people then, and tell us still, what such a state of affairs would look like.

In a world where shalom prevailed, all marriages would be healthy and all children would be safe. Those who have too much would give to those who have too little. Israeli and Palestinian children would play together on the West Bank; their parents would build homes for one another. In offices and corporate boardrooms, executives would secretly scheme to help their colleagues succeed; they would compliment them behind their backs. Tabloids would be filled with accounts of courage and moral beauty. Talk shows would feature mothers and daughters who love each other deeply, wives who give birth to their husbands’ children, and men who secretly enjoy dressing as men.

Disagreements would be settled with grace and civility. Doors would have no locks; cars would have no alarms. Schools would no longer need police presence or even hall monitors; students and teachers and janitors would honor and value one another’s work. At recess, every kid would get picked for a team.

People would be neither bored nor hurried. No father would ever again say, “I’m too busy,” to a disappointed child. Divorce courts and battered-women shelters would be turned into community recreation centers. Every time one human being touched another, it would be to express encouragement, affection, and delight. No one would be lonely or afraid. People of different races would join hands; they would honor and be enriched by their differences and be united in their common humanity.

And in the center of the entire community would be its magnificent architect and most glorious resident: the God whose presence fills each person with unceasing splendor and ever-increasing delight.

The writers of Scripture tell us that this vision is the way things are supposed to be. This is what we would look like if we lived up to the norms God set for human life — if our world were truly normal. One day it will be.

A Matter of Life or Death

Some people fear being hurt or losing their freedom if they get too close to others, so they withdraw into work or hobbies or watching TV. But isolation does not work either. I didn’t get here on my own, and my identity and purpose are tied inextricably to relationships. People who seek to live for themselves alone, says Bonhoeffer, “plunge into the bottomless pit of vanity, self-infatuation, and despair.” We are all part of the grits. And, honey, we don’t come by ourselves.

This connectedness has also been called “reciprocal rootedness.” We were created to draw life and nourishment from one another the way the roots of an oak tree draw life from the soil. Community — living in vital connectedness with others — is essential to human life.

Isn’t it a relief to know that nobody is “normal”, that everybody is weird? What is your reaction to John’s description of a world where shalom prevailed? Are you fearful of getting hurt in community? Come join the conversation on our blog! We would love to hear from you! ~ Devotionals Daily 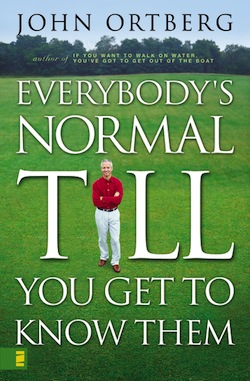