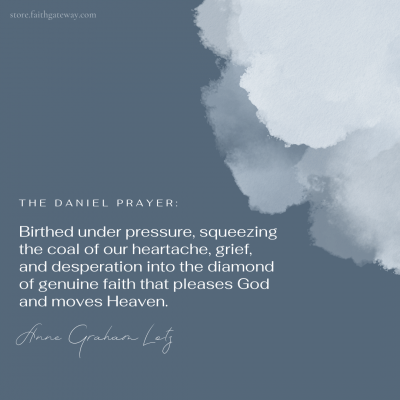 Compelled by Problems in Our World

Daniel’s prayer pulsates with this type of emotional conviction. His life for sixty-seven years had been difficult at best. As an old man, he lived through another violent regime change as the Medo-Persian Empire overthrew the Babylonians. His position was uncertain under the new ruler. He may have felt an increasing apprehension about the security of his people’s future. At the very least, he was living in an unsettled, rapidly changing world, implied by the brief statement, “In the first year of Darius…, who was made ruler over the Babylonian kingdom…” (9:1).1 But rather than wring his hands, Daniel opened up his copy of the Scriptures to see what God had to say. In the end, it was the combination of the problems in his world and the promises in God’s Word that ignited a fire in his heart, compelling him to give voice to his prayer.

Daniel’s prayer is one birthed under pressure, squeezing the coal of our heartache, grief, and desperation into the diamond of genuine faith that pleases God and moves Heaven. It’s a plea for something you intensely long for that you know will take place, but has not taken place yet.

To be honest, I am not gripped by that kind of intensity and compulsion every time I pray. Sometimes, however, there has been no other way I could pray.

When I struggled with infertility, longed to get pregnant, but month after month, did not…

When the door of service was opened and I found myself in the pulpit looking at five hundred upturned, expectant faces waiting to hear what I was going to say…

When I have stood on the platform in a prison auditorium in North Carolina, the General Assembly of the United Nations, the funeral services for each of my parents, and many, many other places where I felt way in over my head…

When I discovered my seventy-eight-year-old husband in our pool, unresponsive…

On occasions like these, simple, memorized, mechanical, now-I-lay-me-down-to-sleep types of prayer just won’t do. The prayer that storms the gates of Heaven is an outpouring of heartfelt emotion and passionate pleading based on God’s Word as we hold Him to His promises.

Compelled by the Promises in God’s Word

In each of the situations above, God had given me a promise, and it was His promise that was the basis for my prayer… When I longed to get pregnant, but month after month did not, God promised me in 1 Samuel 1:17 that He would grant what I had asked of Him. In time, I not only gave birth to a son, but to two daughters.

When I was confined to a small home with small children and deeply desired to serve the Lord, He revealed from Hosea 2:14 that He had intentionally placed me in the “wilderness” so that I would learn to listen to His voice. His Word was true. I did not waste my wilderness years, but studied the Scriptures, and thus was prepared when He called me out to teach the Bible to others.

When the door of service was opened and I found myself in the pulpit looking at five hundred expectant faces, He clearly confirmed my call in Jeremiah 1:4–7 to go wherever He sent me and to say whatever He commanded me. Although my timidity and shyness caused me to be physically sick before I spoke for the first six weeks of teaching, I remembered His word that I was “not to be afraid of their faces” and so did not give in to the fear.

When I have stood in many, many places where I was in over my head, He assured me from John 3:34 that He would give me His Spirit without limit. I have now experienced His promised sufficiency for more than forty years as He has faithfully equipped, enabled, and empowered me to be fully obedient to His call. When I sat in the hospital chapel with the family of my dear friend who was being taken off of life support, the Lord conveyed to me His anger over the temporary victory death seemed to have, but immediately reminded me from John 11:25 and 40 that He is the resurrection and the life, and that if I just believed Him, I would glimpse His glory. And I did — when I was given the privilege of speaking to the hundreds of people who gathered for my friend’s funeral service, and many responded by putting their trust in Jesus.

When I overheard my son and his first wife in that heated argument, God acknowledged my emotional turmoil, yet lifted the veil briefly through Isaiah 54:10–13 so that I caught a reflection of His glory in my family’s future. While there is still more yet to come, I have already seen each family member reflect the glory of God in the most unexpected ways.

When I returned home with my children to a house that had been broken into by thieves, the Lord reminded me from Matthew 6:20 that my real treasures were safely in Heaven. While I enjoy material things, I have learned to hold them loosely, for I know that the real treasure is what’s inside of me.

When I discovered my husband unresponsive in our pool, I jumped into the water, pulled his head up on my lap, and prayed Daniel’s prayer as passionately, as desperately, as I ever have. I readily recalled a promise memorized in childhood: “God is our refuge and strength, an ever present help in trouble. Therefore we will not fear.”2 God quickly brought emergency responders to our aid. They were able to restart Danny’s heart. As I followed Danny to the ER and then into ICU, I had complete peace that was like a river deep within.

Two days later, with my precious children and their spouses surrounding Danny’s bed, I gave permission to the hospital medical team to remove him from life support. They did, and with a flood of tears running down our faces, we sang to him, read Scripture to him, and praised the God of Heaven who is always good, loving, faithful… and who knows best. As Danny took his last breath, I claimed out loud the promises in Revelation 21 and 22: Danny had passed from death to real life. He was in the presence of his Lord and Savior. He was finally Home. And I will see him again.

Later, my inner peace was challenged as I agonized in reflection on what to me seemed like a horrific accident. God directed me to Isaiah 25:1 — “O Lord, you are my God; I will exalt you and praise your name, for in perfect faithfulness you have done marvelous things, things planned long ago.” I know to this day that my husband’s death was not an accident. It was God’s foreordained time for him to move to our Father’s House. And so my heart has been filled not only with peace, but with praise for His perfect faithfulness to carry out to completion what He had begun in Danny’s life seventy-eight years prior.3 Danny had finished his race.4

The promise he discovered during his Bible reading in Jeremiah gave Daniel insight in how to pray for his people. It was also a promise that Daniel proceeded to claim personally on behalf of his people.

Is what’s happening around you and all throughout the world igniting a fire in you? Does it compel you to voice your prayers more frequently or leave you feeling speechless? Come share on our blog!