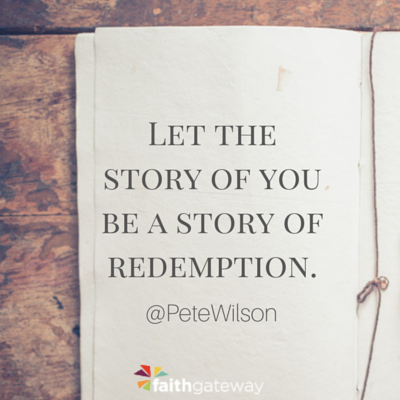 Many of the Psalms are attributed to David. I believe he was paralyzed by the guilt of his past. However, somewhere along his journey he discovered the freedom that comes along with confession.

He wrote about this journey from confession to forgiveness in Psalm 32.

But why do we need to confess sin in the first place?

Because David understands that our most fundamental problem is actually a spiritual one.

He continues in Psalm 32:

When I refused to confess my sin, I was weak and miserable, and I groaned all day long. Day and night your hand of discipline was heavy on me. My strength evaporated like water in the summer heat. — Psalm 32:3-4

In essence, David is saying, When I kept silent, when I was hiding, when I wasn’t talking about it, when I was keeping it secret, I felt like I was dying inside. I imagine most of us can relate to this feeling in some way or another, because there are a lot of things in our lives we keep silent about. Things we feel ashamed of: family problems, compulsive habits, sexual addiction, to name a few. While silence in the moment might seem like the best, safest way to handle it, silence always leads to more pain and guilt and festering inside. It corrodes away our soul. It corrodes away our spirit. And it always, always, always begins to affect other parts of our lives.

It’s amazing how many of us are just stuck in the religious routine. We sing songs, serve in ministries, attend Bible studies, throw money into the offering plate. Week in and week out, we go through the same routine and nobody knows we’re dying inside. Nobody knows we have these secret sins that are keeping us from moving forward. No one knows about it.

We continue looking at Psalm 32 to see how David was finally able to let go of his guilt.

Finally, I confessed all my sins to you and stopped trying to hide them. I said to myself, “I will confess my rebellion to the Lord.” And You forgave me! All my guilt is gone. — Psalm 32:5

It almost seems too easy, doesn’t it? But there’s no process or ritual to go through, no promising anything or having to do something. In fact, confession isn’t doing something about our sin; rather, it means admitting that we can’t do anything about our sin.

There is something intrinsically broken and sinful in every human being. Merely human efforts (education, environment, therapy) cannot cure the sin problem. My brokenness, like yours, is very complex.

Jesus comes as the Great Physician. He comes for sick people who wrestle with sin, not for people who pretend they’re healthy.

If we want to heal, we need to be honest with God and ourselves and each other. Some of you are carrying around secrets that are killing you. Maybe it’s about your past, sexuality, impulses, bitterness, anger, finances, marriage, work, or whatever. But if you keep playing the game and keeping silent about your secrets, you can’t heal and move forward.

As David said in the Psalms, until he dealt with the problem of guilt and sin in his life, all this other stuff he was doing — including being the king of Israel — was really quite pointless. He was going about his life, and he was going about his duties, but his bones were wasting away. He was groaning all day long. He felt like God’s hand was heavy upon him, that his strength was sapped. He needed to come clean.

I met a friend for coffee earlier this week to just catch up. It had been several months since we had spent any significant time with each other. We sat down with our coffee and I started by, almost out of habit, just asking, “How are you, man?” He shot back with the typical “I’m good. Life is busy, but I’m good.”

There was something inside of me that said I needed to push back a bit, so I did something I don’t normally do. I responded by saying, “Let me rephrase my question: How are you really doing?” There was an uncomfortably long pause. He looked out the window of the coffee shop, and I could tell he was starting to tear up. I nervously started to fidget and asked, “You okay?”

He finally looked back at me and said, “No. I’m not okay.”

For the next hour we would have one of the most real, authentic conversations about fears, marriage, and God’s purpose. He had the chance to share some things that had really been holding him in bondage. And to think we almost missed this conversation.

Somewhere along the way I think as Christians we picked up this idea that somehow Christians should be “beyond” or “above” being hurt. We think if we were stronger or better Christians that we wouldn’t hurt so much. All the while you keep telling yourself this same thing over and over…

You say it over and over until you actually start to believe it.

Sin thrives on self-deception, and self-deception thrives on silence. Before we can specifically confess sin, we have to admit we’re broken, shattered, hurting, not okay or fine. As long as we’re deceiving ourselves and pretending to have it all together, we won’t see the need for confession.

My past hurts are causing me to act out in a way that is not pleasing to God and is destroying the person he created me to be. The apostle James wrote in the New Testament,

Confess your sins one to each other and pray for each other so that you may be healed. — James 5:16

So while there is a healing power in confession to God, there’s also a certain healing that takes place when we confess to each other.

There is breakthrough that happens when we confess to other people. There is a chain that is broken.

Pride can often be found behind other sin.

So in confession to another person, there is a profound humiliation that accompanies. We’re admitting we don’t have it all together. We’re not okay. We need help. And a beautiful thing often happens when we confess to another person. It’s called community.

Our past sins and pain long to live in hiddenness. They almost always drag us away from community because the more lonely we are, the more destructive and powerful our past becomes.

In the gospel of Matthew, a very concerned Jesus spoke to the human tendency to hide, pretend, and posture:

What sorrow awaits you teachers of religious law and you Pharisees. Hypocrites! For you are like whitewashed tombs — beautiful on the outside but filled on the inside with dead people’s bones and all sorts of impurity. Outwardly you look like righteous people, but inwardly your hearts are filled with hypocrisy and lawlessness. — Matthew 23:27-28

Jesus says, in this community, called the church, we’re going to do things differently: we will honor the costly humiliating confession of brokenness and sin more than the appearance of invulnerability and impressiveness.

In his book Addiction and Virtue, Kent Dunnington shared that one of the primary discoveries of twelve-step communities is that utterly honest, open relationships of humiliating vulnerability are central to healing.

Have you ever been to an AA group or something similar? One of the first things you’ll notice will be people standing up and introducing themselves like, “My name is John. I’m an alcoholic. I’m an addict. I’m a drunk.” It’s a huge moment and everyone in the circle recognizes this is a huge step in a spiritual battle. There are all kinds of forces of darkness trying to keep that person from coming into the light and making that statement. Everybody knows they fight the same battle. So when that confession gets made in that little twelve-step group in that basement, or health club or church or wherever it is, everybody celebrates the confession.

Unfortunately in the church today, this kind of honesty, confession, and community has become totally optional. It’s unfortunate because I think Jesus made it clear that in his community such things wouldn’t be optional. There’s no other way to find healing from our past.

Now we can’t miss that David ends this prayer of confession not with despair, not with discouragement, not with depression, not with self-doubt. He ends with joy.

For You are my hiding place; You protect me from trouble. You surround me with songs of victory. — Psalm 32:7

This is a song of victory because he’s been forgiven. He has been set free.

You’ve been forgiven. You have been set free.

There is no story in the world like the story of redemption, and it can be your story.

Let the story of you be a story of redemption.

Excerpted with permission from Let Hope In by Pete Wilson, copyright Thomas Nelson.

Is there a sin in your life that you keep holding on to, thinking it’s too much for God to forgive? There’s nothing too small or too big that God can’t redeem. Allow God to bring healing to your past so  you can embrace the joy He has for you. Join the conversation on our blog! We’d love to hear from you! ~ Devotionals Daily