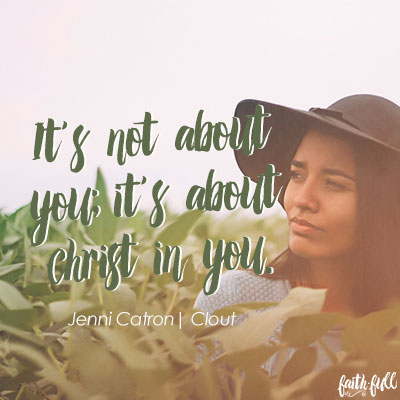 Not only will insecurity cheat us of reaching and then operating consistently at maximum potential, it also will turn our coworkers into threats and trap us into becoming posers. — Beth Moore

Often when we think of insecure people, mousy, timid, wallflower types come to mind. But that’s not typically what insecurity looks like for leaders. Perhaps that is why we’re so prone to ignore it; we don’t always recognize it.

Some insecure leaders learn to mask their “I am not enough” fears with false confidence, gregariousness, brassiness, and bossiness. Other insecure leaders hide their lack of confidence behind performance. In their quest to be enough, they continue to focus on achievement, believing they can perform their way into the approval of others and ultimately into the self-confidence they seek.

That’s how insecurity has played out for me. If I’m not enough, I will do everything I possibly can to be enough. I’ll get good grades. I’ll be a great employee. I’ll dress well. I’ll earn awards. I’ll do it all to prove to myself and others that I am enough. But that’s the trouble with insecurity. It’s never enough.

Insecurity always sees what is missing about oneself.

You might be inclined to be insecure about the very thing that makes you unique. This is comparison creeping in again. I’m not the life of the party. I’m a more serious, contemplative type. At times I get really frustrated about this. I measure my weakness in this area by not getting invited to parties and missing out on social opportunities. I’m not sought out to share the latest office gossip. I’m not the first one on my friends’ call lists when they need to be cheered up. For years I’ve wallowed in the insecurities that come with recognizing the things I’m not. I might not be the life of the party, but I am the person to call when people need someone to help them solve problems. If they need a voice of counsel or they need someone to help them create a long-term plan, I’m their girl.

Insecurity tells us if we’re not included all the time, we must not be enough. Insecurity screams that we have to be all things to all people at all times. We’re not designed for that impossibility, which is a sure path to burnout when we give it a valiant try.

Insecurity can take on numerous faces and impact our influence in a variety of ways. As you read through these examples, look for hints of how insecurity might show up for you.

Where do you see yourself in these descriptions? Are you most consistently prone to two or three of them? We all will find ourselves there from time to time, but if many of them resonate regularly, let me encourage you to seriously confront the insecurities that are holding you back.

I once had someone very close to me say that he couldn’t imagine what God would do through me if I could tackle this enemy of insecurity.

What could God do through you if you confronted this hurdle of insecurity?

The most surprising thing I have learned about insecurity is that insecurity makes you selfish and self-focused. Ironically it is the opposite of what I thought I was. Insecurity’s goal is to keep us fixated on ourselves, wallowing in our “I am not enough” fears.

Having insecurity in your life is like having a wrecking ball constantly swinging through your soul. Hit after hit wears you down until you have nothing left to lead from. You’re ashamed of its control in your life, but you feel powerless to stop its repeated hits. The constant destruction of your confidence leads to incredible self-doubt. Your fear of not being enough seems validated by the behaviors that insecurity brings out in you.

We cannot love well when we’re grappling for our self-worth. When we affirm the value of others by loving them well, our self-worth increases.

To overcome insecurity we have to take the focus off ourselves and place it on others. That’s the sneaky thing about insecurity. We believe we’re not thinking about ourselves because we have such an unhealthy view of ourselves. But our fixation on our perceived inadequacies causes us to stay focused inward rather than outward.

The more we remain focused on ourselves, the more we get sucked into the vortex of insecurity. If you’ve ever been in that place awhile, you understand the feeling that your insecurities are constantly trying to pull you under.

Perhaps because this one is so sensitive and personal to me I’ve been seeking a simple three-step plan that will be a miracle cure for your battle with insecurity. I’m going to give you a three-step plan, but I’ll warn you that it’s not a miracle cure. Rather, it’s a guide to help you reframe your perspective.

1. Identify Where Insecurity Is Impacting Your Influence

Acknowledge the ways that you’re susceptible to feelings of self-doubt. Perhaps you can share this with a trusted friend or family member and ask for help to be more aware of when insecurity is getting the best of you.

When I see the signs of insecurity popping up, I take a few minutes and write about it in a journal. I document the feelings of insecurity and try to discern what about the situation is causing them. Doing this keeps me from sinking deeper into my feelings of insecurity because I’m acknowledging them head-on rather than ignoring them. It helps me see patterns in how insecurity impacts me, and it also helps me identify victories as I look back through my journals and recognize ways that I’ve grown.

2. Commit It to Prayer

I’ll assume the risk of this sounding like a Sunday school answer because for as much as we know this, we don’t do it:

I believe this is where Moses got it right. Rather than cover up or mask his insecurities, he brazenly took them to God. The Bible tells us that God got angry with him at one point (Exodus 4:14). But once Moses confronted his insecurities by taking them to God and allowing God to reframe his perspective, Moses’ leadership flourished.

3. Turn Your Attention to Others

It’s not about you; it’s about Christ in you.

Insecurity makes it all about me. Did I do enough? Was I good enough? Am I smart enough? The replacement perspective is that it’s not about you but about what God can do through you. Your self-worth is no longer on the line when this perspective shifts.

Where do you see insecurity impacting your influence? Which of the examples given can you relate to? What steps can you take to identify insecurity more quickly in your life and take it to God? In what ways can you turn insecurities into opportunities to love and encourage others. I know I have to kill the people-pleaser in me and realize that as I lead the way I feel God calling me to lead, some feathers are going to get ruffled and that’s ok! What about you? Come share with us on our blog! We want to hear from you! ~ Laurie McClure, Faith.Full