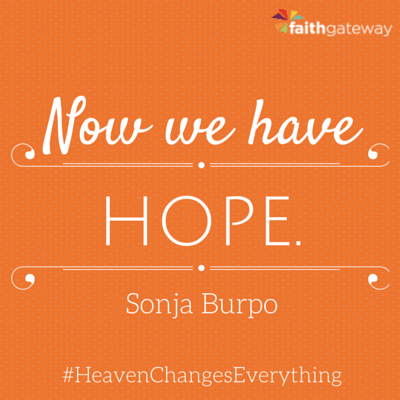 Then two months into the pregnancy, Sonja lost the baby, and our misty-edged dreams popped like soap bubbles. Grief consumed Sonja. The reality of a child lost, one we would never know. An empty space where there wasn’t one before. — Heaven Is for Real

I miscarried two months into my second pregnancy, on June 20, 1998. Father’s Day weekend.

We hadn’t told many people I was pregnant, thank goodness, so very few people had to be told of our loss. There didn’t seem to be any sense in announcing it. Besides, I certainly didn’t feel like talking about it. As a result, only a handful of people knew it had even happened. We kept the miscarriage mostly to ourselves.

That Father’s Day weekend, when it became obvious what was going on, I curled up into the fetal position, lay on our bed, and wept. I wanted to stay there forever, giving in to my grief and letting my family and the rest of the world go on without me. Yes, I knew Todd was hurting too. Yes, I knew our almost-two-year-old, Cassie, needed her mommy. But that day, I couldn’t seem to get through my own grief to think about anyone but myself and the baby I had lost.

One of the hardest things about a miscarriage is just that: few people know or understand the grief that accompanies it. Many are quick to shrug it off, pat you on the shoulder, and say, “You’ll be okay. You can always have another one.” People can easily understand the enormous loss parents feel when a child dies after being born, but it’s harder for most to grasp the loss parents feel when they suffer a miscarriage.

Todd and I had probably never understood, ourselves, how much emotional pain a miscarriage can cause until we experienced it firsthand. And as hard as it is for prospective dads, there’s an extra dimension of pain for the moms, because they can’t help but wonder if they did something to cause it. I certainly felt that way. I had tried to keep myself and the baby as healthy as I knew how. But something had gone terribly wrong, and I blamed myself for the baby’s death.

I prayed, asking God to forgive me for it, whatever it was. And I asked God why? Why had our baby died?

I believe God is sovereign. I don’t doubt that He has a bigger plan for my life than I can know this side of heaven. But that weekend it didn’t really ease the pain of my loss to think that God had a reason for letting my baby die. Todd and I told ourselves God needed our baby for some other purpose than being our child. Frankly, we didn’t like that, not one bit, but we accepted that belief.

A few months later, when I became pregnant with Colton, we were ecstatic. But we were also scared, worrying that I would miscarry again. When he was born healthy, the joy and the relief we felt were indescribable.

Time passed, and as happens with most grief, our sorrow eased. But it never went away. Not by a long shot. Then, when Colton’s appendix ruptured and it seemed we were going to lose him too, all the old grief came rushing back, along with the new terror that our son would die too.

It was so hard to understand how such pain and distress could be part of God’s plan.

And then came the day, seven months after Colton’s discharge from the hospital, that he told us he has two sisters: Cassie — and the sister who ran up to greet him when he visited heaven.

We were dumbfounded. And then comforted. So comforted that we knew we had to share what had happened. And in that sharing we began to see God’s plan.

When a couple in our church endured a miscarriage, we reached out to them. We invited them into our home and shared their grief as only those who have experienced it can do. We cried with them and prayed with them. Then we told them what we believed: The baby we miscarried is in heaven. Colton saw her. That means your child is there too, we told them, and someday you’re going to see him or her.

Over the years, we’ve walked through the grief of miscarriage with three other couples, and we’ve seen the impact our story has had on them. One of the moms told me, “Sonja, the one thing that helps me is knowing Colton saw his sister in heaven, so I know my baby is okay. It’s tough now, but we’re going to get through this because we have that hope that we’ll see our child someday too.”

We didn’t bring that couple’s baby back, but we journeyed through the freshest part of their grief with them and gave them hope. We also learned how powerful our story could be in helping others. To put it simply: that’s why we wrote Heaven Is for Real.

Todd points out that when Jesus was urgently called to the home of his dying friend Lazarus, the Lord hung back for a few days. Lazarus and his two sisters were Jesus’ friends, and they were also believers. They knew Jesus could save Lazarus from death. But Jesus didn’t go, and Lazarus died. Still the Lord waited. Amazingly, He told His disciples,

The disciples were confused. How could Jesus possibly be glad that His friend had died? He told them, “You’re about to be given new grounds for believing.”

You see, God doesn’t do anything without a bigger purpose than we can imagine. But because we can’t even begin to imagine it, we sometimes end up stuck in feelings of hurt and confusion.

Finally, after four days, Jesus and His disciples went to His friends’ home. And what did Jesus do when He got to that sad place where Lazarus’ sisters and their friends were mourning his death?

Jesus wept. That’s right. He cried right along with His heartbroken friends. [tweet this]

At that point His disciples were probably really confused. After all, Jesus had told them He was glad Lazarus died. He had said He was going to use Lazarus’ death to give them new grounds for believing. And yet there He was, weeping. That’s the kind of confusion you feel when you’re a believer and God lets something happen that turns your world upside down and breaks your heart. It’s what happened to us when I miscarried. Then it happened again when Colton almost died.

When you’re that hurt and confused, you can end up curled in the fetal position, so grief-stricken you cannot function. Or in a closed-off hospital room, railing at God while your little boy undergoes emergency surgery with no assurance he’ll live through it. You think,

This isn’t fair, Lord! We’re following You! Why are You letting this happen to us?

But that’s when we need to remember Jesus’ words: He may be using our difficult situation to provide “new grounds for believing.”

After all, what did Jesus do in front of Lazarus’ tomb? He called to him, “Lazarus, come out!” And Lazarus did!

Do you think any people in that crowd of friends and neighbors standing around the tomb might have become believers that day? Of course they did!

There are things God allows to happen because He knows the outcome is going to be greater than anything we could ever do on our own. [tweet this]

I’ve been criticized for saying God needed my unborn baby. But how can anyone look at the outcome and not believe that? I would never want to go through another miscarriage. Ever. But we’ve heard from hundreds, maybe thousands of people who have lost a child and who now are finding peace because they believe that child is in heaven and they will see him or her someday. It’s the part of Colton’s story that has connected us most powerfully with hurting people around the world.

When I’m speaking somewhere to a women’s group, I know that sharing our miscarriage experience is the thing that will most closely connect my heart to the hearts of many women in that audience. As a matter of fact, I have to brace myself for the reaction I’ve learned to expect. It’s a subconscious reaction of hurt and heartache, and when I see it on a woman’s face, I feel an instant connection, my heart to hers, sensing without asking that she too has lost a child.

Most recently, I saw that reaction during a tour of speaking appearances in the Midwest. If you were in one of those audiences, I want you to know I saw you. Maybe you were that woman in the gray sweater. Or the lady wearing the pretty scarf. Or the older lady dabbing at her eyes with a tissue. I saw the pain in your faces as we shared the hurt in our hearts.

My prayer is that by sharing Colton’s story I can reassure those women, and all parents who’ve lost a child, that they will see their little one again. Heaven is for real, and if my baby is there, so is yours. Everywhere we go, Todd and I tell people that giving people this kind of hope is why we wrote the book. It’s why we do what we do.

Couples who have miscarried still seek out Todd for counseling. They know he understands because we’ve been where they are. We know how bad it hurts. But now we have something else to share with them besides their grief.Now we have hope.

The greatest outcome might be one that only He can see today, but you will one day be able to see too! Heaven is waiting.

The Spirit also helps in our weaknesses. For we do not know what we should pray for as we ought, but the Spirit Himself makes intercession for us with groanings which cannot be uttered… And we know that all things work together for good to those who love God, to those who are the called according to His purpose. —Romans 8:26, Romans 8:28

Excerpted with permission from Heaven Changes Everything by Todd and Sonja Burpo, copyright Thomas Nelson.

Many of our readers can connect with Sonja’s story of loss. In the midst of the pain, Sonja found Jesus to be by her side comforting her with the assurance that her child was in heaven with Him. Join the conversation on our blog! We’d love to hear about your own journey navigating through loss and finding hope in Jesus through it all.