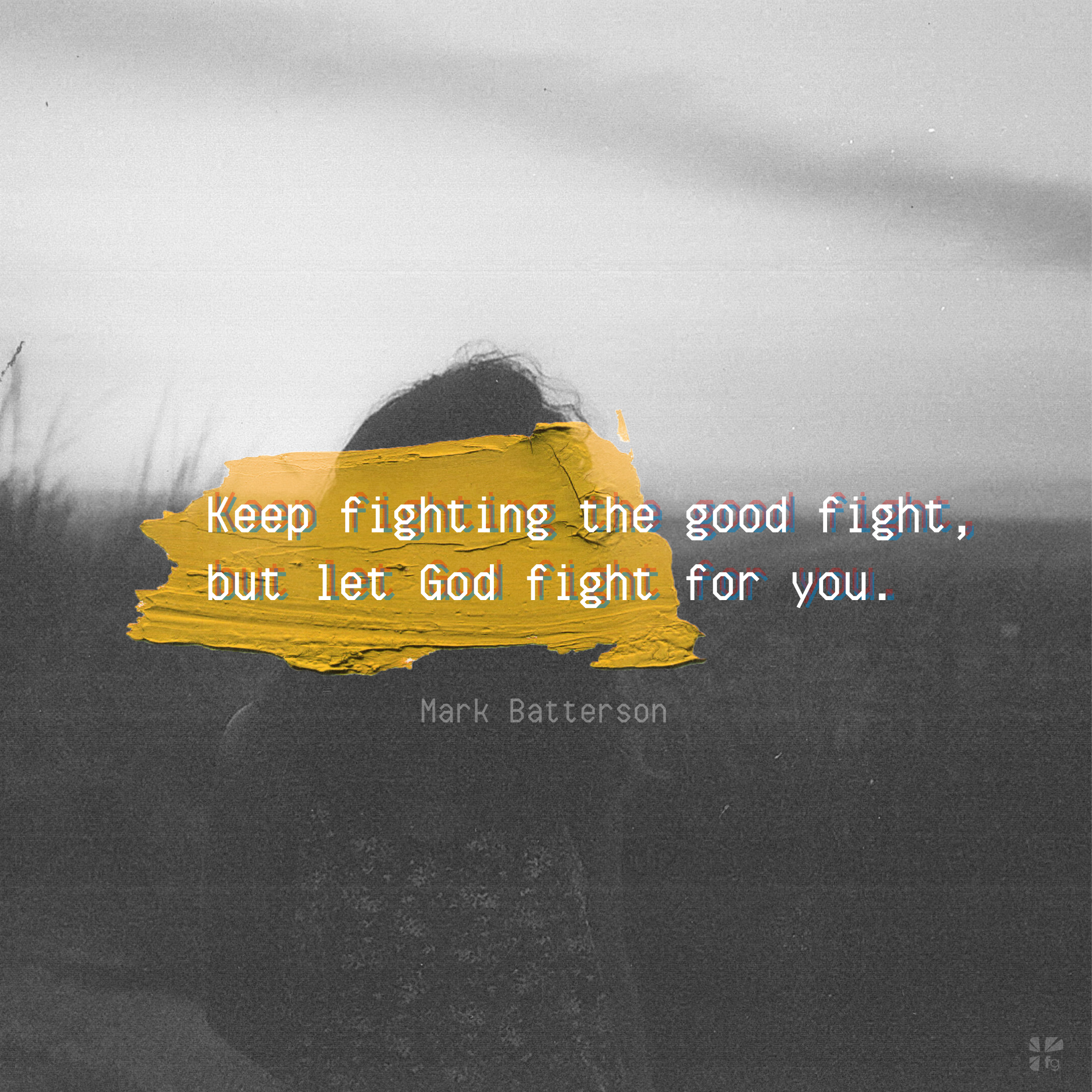 my God and Lord.

God loves it when we fight for Him. But God loves it even more when we let Him fight for us! How do we do that? When we hit our knees, God extends His mighty right hand on our behalf. When we pray, He fights our battles for us. So keep fighting the good fight, but let God fight for you.

Contend, Lord, with those who contend with me;

Awake, and rise to my defense!

Contend for me, my God and Lord.1

I love the Hebrew word translated “contend” in these verses. It’s two-dimensional. It refers to both physical combat and verbal combat. So it runs the gamut from cage fighting to courtrooms.

In terms of physical combat, God is like the mother grizzly that protects her cubs. It is God’s instinctive nature because we are the apple of His eye. If anyone messes with us, they are messing with our heavenly Father.

In terms of verbal combat, God is like the defense attorney that pleads our case, pleads our cause. When our backs are against the wall, God has our backs. When everything is on the line, God steps in. Satan is the accuser of the brethren, but he’s no match for the Paraclete.

I made a determination a few years ago that I wasn’t going to defend myself against any and every criticism that comes my way. Life is too short, and the mission is too important. And I’m called to play offense, not defense. God is my defender. And I believe He is contending for me if my cause is just and my heart is right.

It’s important for us to have people in our lives who can speak words of rebuke and exhortation. But they will typically be someone with whom we have a relationship. When discerning whether to respond to criticism, I try to discern the spirit of the person doing the criticizing. Is the purpose redemptive or vindictive? And I put the criticism through the filter of Scripture. If it passes through the filter, then I need to repent. If it doesn’t, then I don’t let it pierce my heart. And I let God defend and contend on my behalf.

On September 7, 1774, the Continental Congress held its first official meeting at Carpenter’s Hall in Philadelphia. Their first official act was prayer. And it wasn’t some perfunctory prayer that was nothing more than protocol; it was a good old-fashioned prayer meeting. Our founding fathers prayed with fervency and intensity. Earwitnesses heard them interceding several blocks away. Eyewitnesses said Henry, Randolph, Rutledge, Lee, and Jay were doubled over as they bowed in reverence before God. John Adams later recounted that it “has had an excellent effect upon everybody here.”3 And not surprisingly, General George Washington ended up on his knees. These revolutionaries knew their cause was doomed to fail without divine intervention. They prayed like it depended on God because they knew it did.

The pastor who led them in prayer that morning was Dr. Jacob Duche. The Scripture he turned to? Psalm 35. He prayed that just as the Lord contended for David, God would contend for their cause if it were a righteous one. Dr. Duche’s prayer is more than just a piece of our history; it’s a piece of our destiny.

O Lord, our Heavenly Father, high and mighty King of kings and Lord of lords, who dost from Thy throne behold all dwellers on the earth, and reignest with power supreme and uncontrolled over all the kingdoms, Empires, and Governments; look down in mercy, we beseech Thee, on these our American states who have fled to Thee from the rod of the oppressor and thrown themselves on Thy gracious protection, desiring to be henceforth dependent only on Thee…

Be Thou present, O God of wisdom, and direct the councils of this honorable assembly… hower down on them and the millions they here represent, such temporal blessings as Thou seeist expedient for them in this world and crown them with everlasting glory in the world to come. All this we ask in the name and through the merits of Jesus Christ, Thy son and our savior. Amen.4

Our prayers don’t have expiration dates. That’s why I believe this prayer is still being answered 238 years later. It is part of our prayer genealogy as Americans. This was a genesis prayer. It was the very first prayer uttered at the start of the revolution. It was a prayer for every American henceforth. And it is still being answered. There is no other explanation for the improbability of America. God contended for our cause.

I’m certainly not suggesting that America is always right and never wrong. Like every nation’s history, ours is dotted with grievous sins. But the only explanation for the blessings we’ve experienced is the favor of God.

If you are on God’s side, then God is on your side.

And you can live with holy confidence, knowing that when God is contending for your cause, your cause is destined to succeed. This doesn’t mean there won’t be setbacks and sacrifices along the way; it just means the war has already been won.

God is still contending for our cause. He’s a great listener. Doesn’t miss a thing. How have you seen prayers answered in your life or someone else’s life recently? We’d love to hear your testimony. Come share on our blog!