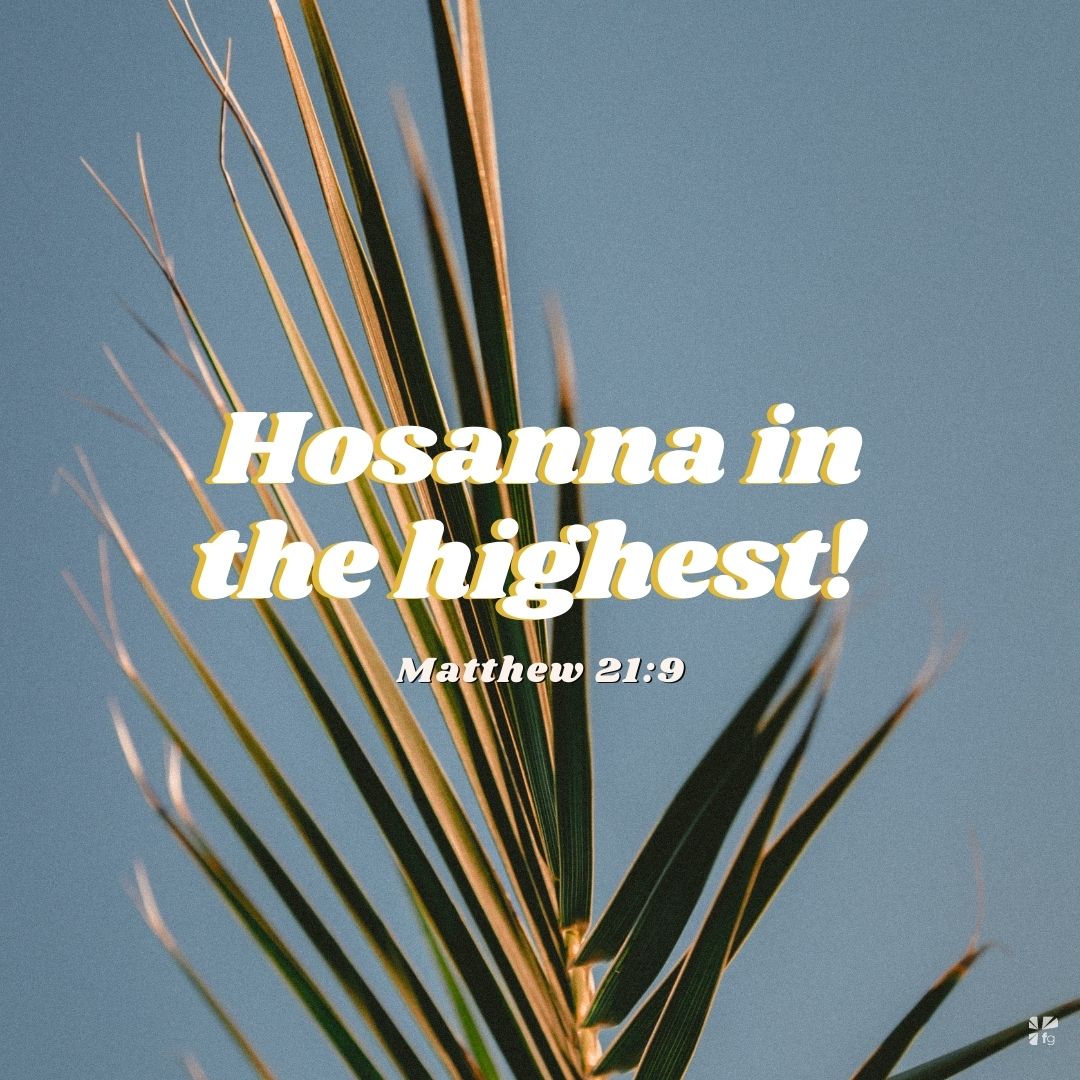 Jesus’s entrance into Jerusalem is not a quiet affair. He is met by crowds of people who begin spreading garments on the road. According to 2 Kings 9:13, it was not uncommon for people to lay their garments in the road for a leader to ride over. They did this as a sign of their respect and to indicate their submission to his authority.1 Additionally, branches were cut and spread onto the garments that lined the streets. John 12:13 names the branches as “palm branches,” which were symbols of salvation for the Jews. And salvation was the word on their minds and on their lips. Collectively, the multitude cried out,

Hosanna to the Son of David; blessed is He who comes in the name of the Lord, Hosanna in the highest!

The Hebrew word hosanna is a plea for salvation: “Save us now!” The people were at the right place, but for the wrong reasons, participating in the wrong feast day. Palm branches, cries of hosanna, and shouts of “blessed is he who comes in the name of the Lord” are all elements associated with the Feast of Tabernacles.2 But this was the Passover, a celebration of a different kind.

The title the people spoke, “Son of David,” was a common messianic title. It indicates that the people believed Jesus to be the Messiah they had been waiting for.3 The shouts of hosanna allude to Psalm 118:25-26:

Save us, we pray, O Lord! O Lord, we pray, give us success! Blessed is He who comes in the name of the Lord! We bless you from the house of the Lord.

Simply by saying hosanna, the people were declaring to God that they were tired of their oppression, through with their corrupt leaders. They were asking for liberty, for victory. Unfortunately, the bystanders were not interested in salvation from their own sins, but in salvation from the Romans. What the crowds missed was an understanding of why Jesus had come. He had not come to offer them a military victory over Rome. He came to establish a heavenly kingdom on earth and to conquer the age-old enemies of Adam’s children — sin, death, hell, and the grave.

Jesus was fighting a cosmic battle, bringing rebellious children back into the family of God by making peace with God, not war on Israel’s current national enemies.

In case we are tempted to judge them for their short-sighted focus on freedom from Rome, we should consider how common it is to look for human leaders to deliver us from our own problems. A quick look at American politics will show that we are no different from the Jews in this regard. We would be wise to refrain from throwing proverbial stones at the Jewish people for their misunderstanding of Jesus’s ministry! In fact, they had good reason to think the way they did. Many prophecies of the Old Testament point to a messianic time of vengeance aimed at Israel’s enemies. The people were understanding the scriptures correctly; the Messiah will come at some point to bring judgment. But He had another mission to accomplish first. God’s own people needed to be saved from the consequences of their sin.

Excerpted with permission from The Forgotten Jesus by Robby Gallaty, copyright Robert Gallaty.

Watch the trailer for The Forgotten Jesus

HOSANNAH! Hosannah in the highest! Today, on Palm Sunday, may we recognize the true King and shout out for Him to save us… from our sin and from ourselves. May we enter into Holy Week with Jesus as our Savior! Come share with us on our blog! We want to hear from you this Palm Sunday! ~ Devotionals Daily