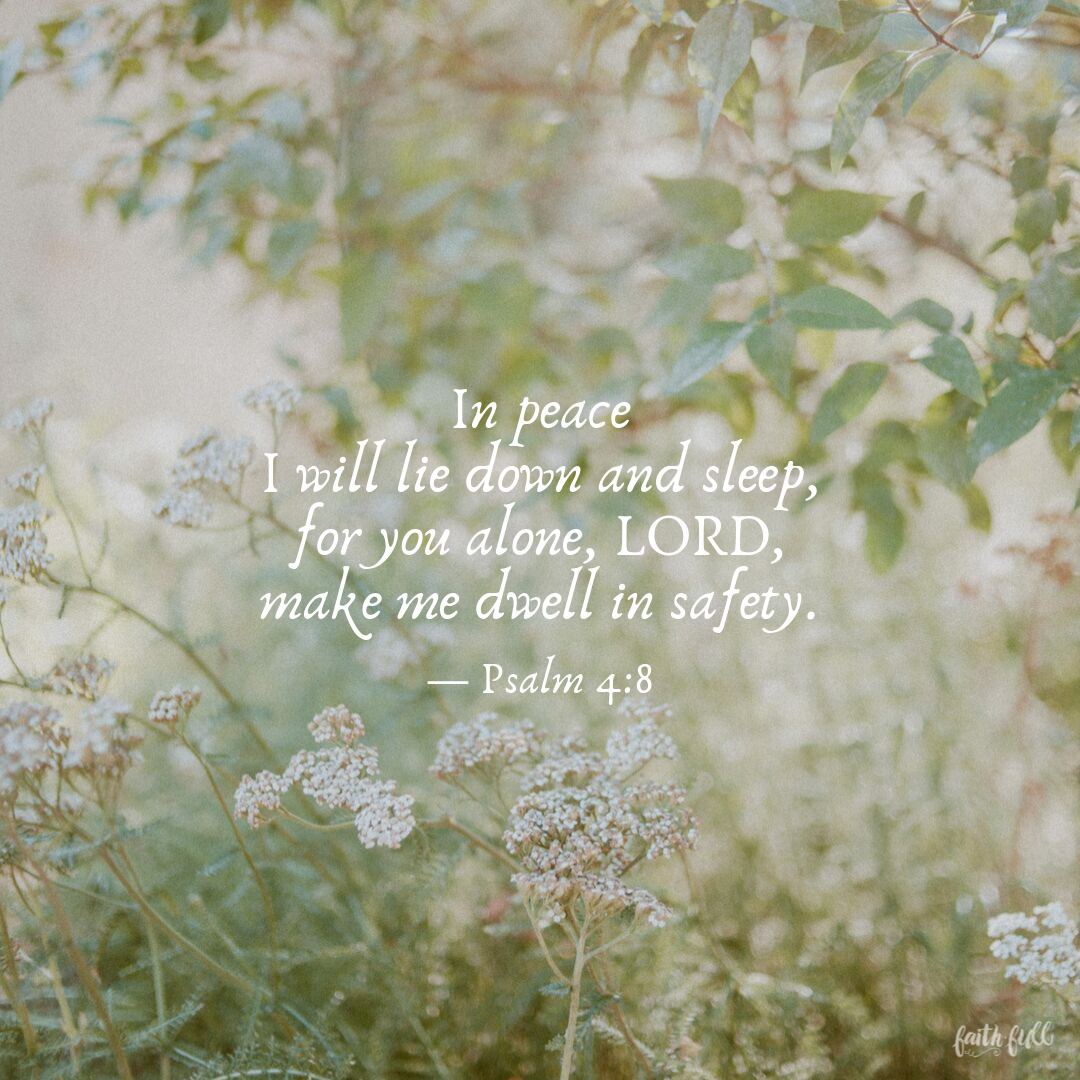 Finish each day and be done with it. You have done what you could. Some blunders and absurdities no doubt crept in; forget them as soon as you can. Tomorrow is a new day. You shall begin it serenely and with too high a spirit to be encumbered with your old nonsense. — Ralph Waldo Emerson

My daddy was a night owl. Many a night I remember him revving up the popcorn machine, ready for conversation with anyone who would listen, while I stumbled off to bed. After twelve hours of high school, band practice, and homework, I couldn’t hang. Dad seemed to thrive when everyone else was asleep; he’d whip up something in the kitchen, listen to the radio, or read a book into the early morning hours. But his lack of sleep caught up with him each day by late afternoon, when he sometimes dozed off mid-sentence while sitting upright.

I never was a night owl, at least not until my first pregnancy at the age of twenty-five. With my swollen belly, tiny bladder, and need to spoon a king-size pillow on my left side, I got my first taste of insomnia. I chalked it up to pregnancy, but when Cade came, my sleepless nights continued. I’m sure feeding a newborn every three hours had something to do with this.

As our family expanded, so did my sleepless season. Babies two and three came, and I slept even less. Five years into parenthood, I realized a new groove had been carved in my brain. My body was programmed to wake every night around three a.m., even if the children didn’t wake me.

Some nights I’d wake to use the bathroom and drift back to sleep. Other nights, my mind would rush to what I didn’t accomplish the day prior, and I’d create a mental task list. Sometimes I woke with conviction, mulling over how I could have treated someone differently, replaying the conversation in my mind. On rare occasions, I’d pull way out and take a broader inventory, examining and questioning the current season:

Was I living well? Loving well? Focused on what matters?

These racing questions seemed of utmost importance in those pre-dawn hours, and I always had the energy to process each topic. I’d reach for my phone to capture my conclusions on the notes app so I could reference them later.

As the years progressed, my mid-sleep musings became more spiritually productive. I’d feel prompted to pray, or consider a Scripture I’d use for an upcoming talk, or remember a story for a writing project. Instead of treating these moments of being jarred awake as a nuisance, I began to assume these interruptions were invitations to encounter something I wasn’t making time for during the day.

I accepted my new normal, sleeping only half the night, and even though I was always exhausted, I learned how to navigate my life at 60 percent. With an extra shot of caffeine mid-afternoon, and half a Tylenol PM in the evening, I could rally and make my lack of sleep work, at least when I wasn’t traveling.

For what seemed like too many months in a row, I traveled early and often. I scheduled too many pre-dawn flights, stayed up too late talking with women after events, half-slept in random hotel rooms, and had no real rhythm. When I returned to my family, I had no energy left for them. By the time the kids arrived home from school each afternoon, I felt like I’d been hit by a train. I wanted to crawl into bed, wanted to tell my kids, “I know I haven’t seen you all day, but I’m dead tired.” The shame I felt from shortchanging them pushed me to forge ahead — with a headache and short fuse.

Because I wasn’t getting enough rest, everything felt overwhelming. Even the simplest tasks — loading the dishwasher, sorting laundry, writing an email — felt like an uphill slog through molasses. During this sleepless season, dirty clothes and dishes were piled high. Gabe picked up the pieces, which added its own dynamic of stress. The more responsibility I took on, the less I slept. The less I slept, the less productive I was. The less productive I was, the more helpless I felt. Helplessness brought stress, anxiety, and mild depression. My relationships with those I loved most began to suffer, and in the meltdown of it all, I began to feel like the purpose I had fought for was being stolen by the sandman.

That’s when I knew: it was time to get serious about sleep.

Watch the Video: Rhythms of Renewal

Creating the Conditions for Sleep

I started researching sleep, and I realized just how important it was. One Harvard study claimed, “lack of adequate sleep can affect judgment, mood, ability to learn and retain information, and may increase the risk of serious accidents and injury.”1 What’s more, the report suggested sleep deprivation could lead to health problems and even early mortality. If there was one thing I didn’t want, it was to die early, so I got even more serious and read even more about sleep.

In her book The Sleep Revolution, Arianna Huffington reports, “when you find depression, even when you find anxiety, when you scratch the surface 80 to 90 percent of the time you find a sleep problem as well.”2 Huffington shows how sleep deprivation isn’t just an adult problem, either. In fact, it is exacerbated in teens: “Television, video games, smartphones, tablets have all been recently identified as agents that frequently disrupt a child’s sleep, including leading to total sleep deprivation.”3

Getting enough sleep is critical if we hope to experience sustained emotional and mental health. And though we’d all like to have night after night of great sleep, we’re often unaware of the simple factors contributing to our lack of rest. Huffington helped me understand these, too. Her book helped me see the need to make sleep a top priority, and I began implementing some of her suggestions for creating an environment for better sleep. I started turning down the lights at the end of the evening and tried to create a sense of calm in the bedroom prior to getting in bed. I did my best to keep devices away from the bed and kept my bedroom temperature below seventy degrees. I began taking baths before bed and lighting candles. I even wrote down things I needed to do so I wouldn’t wake with a mental list hours later. Those things seemed to help, but it was only the beginning.

I created a consistent structure for organizing my time each day. I spent the morning hours doing creative work and held meetings over lunch. In the afternoon, I tended to correspondence and then took a brisk walk. As I became more intentional about the rhythm of my days, I fell into bed, content with a day spent well. Instead of stressing with regret and seeing a mountain of things undone, I went to bed tired and with a heart of release — the perfect way to drift off to sleep.

When I got intentional about my waking hours, my sleeping hours followed without interruption.

I started eating better, too. I cut sugar down to a bare minimum, especially after dinner. I offset my sugar intake with plenty of exercise, no less than 10,000 steps a day. This seemed to help, too, and the more I slept, the more energy I had to keep this new cycle of sleep going. For the first time in years, I was enjoying sleep. In fact, I started looking forward to it. As I caught up on years of missed sleep and reset my rhythms, I began to notice the effect on my life. I was more productive and able to keep up with the important tasks of each day. My mood was better, too; my fuse not as short with Gabe or the children. I began to see sleep as the reward for a well-lived day. Sleep was the invitation, not the mid-night wakeup call, and as I slept more and more, I could sense the anxiety, stress, and chaos of my internal world melting away.

Does low-grade anxiety or depression follow you everywhere you go? Are you often distracted, unable to follow a singular train of thought? Is your temper often short? Do you lose it on your coworkers, kids, and spouse daily? Dig a little. Ask yourself, Am I getting enough sleep? If you’re not getting between seven and nine hours, change up your rhythms and routines, and make sleep a priority. It’ll make all the difference.

I lie down and sleep; I wake again, because the LORD sustains me. — Psalm 3:5

In peace I will lie down and sleep, for you alone, LORD, make me dwell in safety. — Psalm 4:8

I need to get much more into the rhythm of renewal of sleep. How about you? The Lord gave us sleep as a gift, an end to something whether bad or good, and a refresher before something new. His mercies are new every morning… but it doesn’t feel like that for the sleep deprived! Come share with us our bedtime priorities on our blog. We want to hear from you! ~ Laurie McClure, Faith.Full