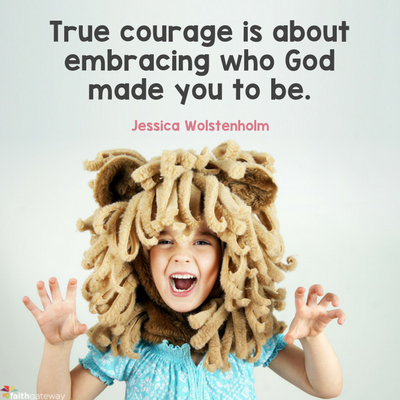 I’m not the bravest one in the bunch. Deep down, my heart longs for adventure, but adventure of the safe variety.

On a recent family vacation with my best friend and her brave kids, our children had the opportunity to try a ropes course. It wasn’t a large course, just a small concoction of beams and bridges inside a giant arcade.

My friend’s kids were all over it. They love a challenge and an adventure that builds their courage. At first, my daughter jumped at the chance to give it a try but once atop the first level, she begged me to come up and join her. I strapped on a harness and began to climb because I needed to help my girl find her brave.

But when I arrived by her side her fear didn’t diminish. And in fact, my own began to take over. You see, I’m a bit afraid of heights, so even nine feet above the ground was too much for me to handle. I would have pushed through my fear but my daughter begged me to get down. She simply wasn’t ready to try something new.

We moved on to play arcade games and before I knew it my five-year-old son was yelling down and waving at me from the bridges above. With my husband by his side, he was conquering his own fear up there. When I left them at the entrance to the ropes course a few minutes earlier, I never expected him to get that far.

Seeing her little brother up there didn’t convince my girl to try again. And I didn’t push her. Later that day she climbed a rock wall and almost made it to the top. She was pushing herself to be brave in her own way and in her own time.

I was equally proud of both my kiddos that day.  Although I want to see them embrace and overcome the things that scare them, I know that every child is beautifully unique and courage looks different for each one.

While our culture romanticizes adventure, encouraging people to push themselves and do the impossible, wisdom tells me true courage has little to do with being fearless.

True courage is about embracing who God made you to be.

True courage is about being open to doing things you’ve never done before.

True courage asks for help when needed because the bravest of souls knows we weren’t meant to do this adventure of life on our own.

True courage is in our willingness to risk our hearts for community and connection, despite our differences.

True courage isn’t threatened by someone who looks more brave on the outside. The truly courageous are willing to be inspired and challenged by others without losing themselves in the process.

True courage may roar at times, but as the saying goes – Courage doesn’t always roar. Sometimes courage is the little voice at the end of the day saying, I’ll try again tomorrow. – Mary Anne Radmacher

I hope my daughter will try again to overcome her fear of the new. When she’s ready, I’ll be right by her side to help her find true courage to grow in new experiences.

We can’t make our kids brave by pushing them to do hard things. But we can be present to support and encourage their process of growth without expectations, reminding them we are near by cheering for them wildly at their pace, not ours.

Share a conversation about true courage as a family with the adorable new book, Lizzy the Lioness by Lisa Bevere. Through Lizzy’s story, children will see that bravery is so much more than big muscles or loud roars.

How do you help your children show courage? How do you encourage them while not giving them more than they can handle? We’d love to hear your thoughts in the comments!