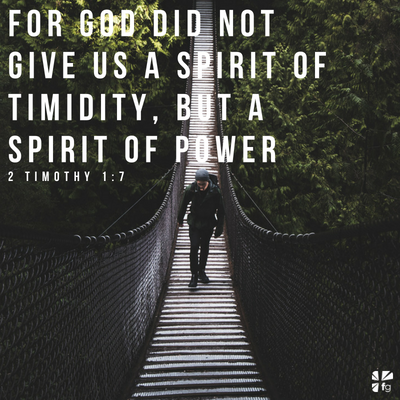 For God did not give us a spirit of timidity, but a spirit of power, of love and of self-discipline. So do not be ashamed to testify about our Lord. — 2 Timothy 1:7-8

Daniel had been in Babylon for decades when we are told of a very dramatic confrontation he had with the new king, Nebuchadnezzar’s spoiled successor, Belshazzar.

With the Medo-Persian army laying siege outside the walls of the city of Babylon, Belshazzar decided to throw a party for the officials of his kingdom. It doesn’t take much imagination to describe the scene of opulence. Lavish food, free-flowing wine, provocative entertainment, and powerful men being seduced by beautiful women led to everyone becoming intoxicated and all restraints abandoned.

It was then that Belshazzar stepped over the line. He ordered that the golden vessels Nebuchadnezzar had seized from the temple in Jerusalem — the vessels that had been used in worship of the one, true living God of Abraham, Isaac, and Jacob — be brought into the banqueting hall. He then passed them around to his drunken friends and used them to toast Babylon’s pagan gods.

At that moment, the fingers of a mysterious hand without an arm appeared and wrote something on the wall.

The king watched the hand as it wrote. His face turned pale and he was so frightened that his knees knocked together and his legs gave way. — Daniel 5:5-6

The silence must have been deafening as all merriment and movement ceased. The king was suddenly stone cold sober and terrified, shaking from limb to limb. He called for his wise men to come in and interpret the writing, promising that whoever could read it and interpret it would be clothed in purple, have a gold chain placed around his neck, and be promoted to third highest ruler in Babylon. But even with those generous incentives, no one could even guess what the strange script was about, much less read and accurately interpret it.

At that point, there must have been an outbreak of curses, shouting, threats, and general confusion because the queen mother heard the commotion and came into the banquet hall. And this is what she said:

Don’t be alarmed! Don’t look so pale! There is a man in your kingdom who has the spirit of the holy gods in him. In the time of your father he was found to have insight and intelligence and wisdom like that of the gods… Call for Daniel, and he will tell you what the writing means. — Daniel 5:10-12

So the king sent for Daniel. What a contrast to all the wealthy, spoiled, drunken, baffled officials Daniel must have been with his dignity and humility. He would have been an old man by then with the deep etchings of godly character in his face. I would imagine that he held his head high, with a fearlessness in his eyes that would have made the king shudder in his miserable spirit.

Courage is the fruit of a deeply held conviction.

The king addressed Daniel with disrespectful, condescending words that surely were intended to put him in his place, remind him of his inferior position, and intimidate him into submission. “Are you Daniel, one of the exiles my father the king brought from Judah?” (Daniel 5:13). In other words, “You’re a nobody. Captured. Enslaved.” He went on to say, “But I’ve heard you are smart and can solve difficult problems. If you can solve this one, I will clothe you in purple, put a gold chain around your neck, and make you the third highest ruler in Babylon” (paraphrase of Daniel 5:14-16).

To Daniel’s credit, he didn’t laugh in the king’s face. But he also didn’t hesitate. He courageously responded,

You may keep your gifts for yourself and give your rewards to someone else. — Daniel 5:17

Then he proceeded to unleash the full warning of God’s judgment because of the king’s arrogant, willful, and wicked ways.

You did not honor the God who holds in His hand your life. — he accused in Daniel 5:23

And then Daniel read him the riot act — the handwriting that was on the wall:

God has numbered the days of your reign and brought it to an end… You have been weighed on the scales and found wanting… Your kingdom is divided and given to the Medes and Persians. — Daniel 5:26-28

Even as Daniel spoke, the Medes and Persians slipped under the gate of the city, and by morning, Belshazzar was dead and his kingdom had passed to Darius.

Daniel chose to be courageous because he was convinced of the truth and the solid belief that there is a Higher Authority who determines future destinies.

In our politically correct culture, how convinced of the truth are you? Are you so convinced that you will choose to courageously proclaim it regardless of the consequences, confident it comes from One with supreme authority?

You can be courageous no matter what you face. God has your back. Don’t be afraid to share your faith! Come share your thoughts with us on our blog. We want to hear from you! ~ Devotionals Daily