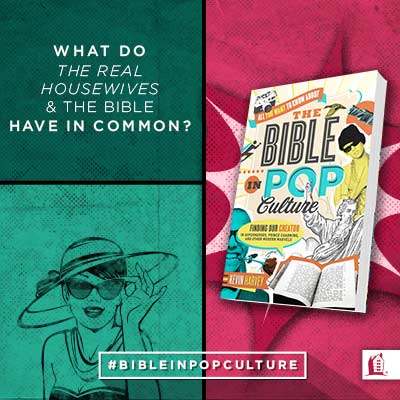 Who Do You Think You Are: The Beautiful Mess of Jesus’ Genealogy

The NBC and TLC show Who Do You Think You Are? may appear to be only a sixty-minute-long Ancestry.com commercial that showcases celebrities researching their family roots, but the sometimes messy family tree each person discovers on their journey is reminiscent to the genealogy God specifically ordained for his Son, Jesus.

Sex and the City actress Cynthia Nixon discovered a great-great-great-grandma who put an ax right through her husband’s eyes as he was sleeping one night; About a Boy’s Minnie Driver learned of a tangled web while researching the ancestors of the dad she shared with another family; and The Notebook star Rachel McAdams learned of a family member who served as a British loyalist during the American Revolution.

As these actresses and others on the show have learned, all the various branches of our family trees say a lot about who we are and what it took to get us to where we are at this point in our lives. McAdams said of her motivation for wanting to find out more about her family, “We also want to create more of a connection for our mom to be able to know these things about her family… It would really help her to be able to put more of the pieces of the puzzle together.”

The genealogy of Jesus that Matthew gave us at the beginning of his gospel indeed helps to put the puzzle pieces together for who Jesus is and why he came, simply by merely looking at the women Matthew lists. The inclusion of women in a genealogy list was atypical, since descent was usually traced through men, as they were the head of the family; but Matthew makes a point to add in a few women from Jesus’ family tree — ladies who you could say had “questionable” character.

Tamar was Judah’s daughter-in-law who, when her mother-in-law died, disguised herself as a prostitute and slept with Judah, becoming pregnant with twins. She made Matthew’s genealogy.

Rahab was a prostitute living in the promised land before Joshua and the Israelites invaded the land. She’s in the who’s who list also.

Bathsheba slept with King David when her husband Uriah was out to war — yep, she made the list.

Ruth was a Gentile from the land of Moab, a land that God called “the washpot in which I rinse My feet” (Psalm 60:8). Yet one of the washpot’s maidens became the great-grandmother of King David and was part of the Messiah’s lineage.

And then of course teenage Mary gave birth to Jesus, the Savior of all these women and the glue that holds all the puzzle pieces together.

When Jason Sudeikis, Rashida Jones, and Kelly Clarkson set out on their quests to find out more about where they came from, there was no guarantee that every branch of their trees would be filled with war heroes and schoolteachers. And certainly that is not what they found. But anyone studying Jesus’ roots would find more sinners and less saints, and that’s exactly how God designed it. Jesus came to redeem all. Prostitutes, ax murderers, and polygamists too.

Crazy Families Are Nothing New

One day Uncle Si from Duck Dynasty is handcuffing himself to his nephew Willie and another day is in a doughnut-induced coma in his new trailer when Jase and the others tow him away into the woods and leave him alone in the middle of nowhere. In Leah Remini: It’s All Relative, family members bicker and nag each other about whether someone is using words like “rhetorical” and “ambiance” correctly. Kardashian daughters take a cell phone video of their mom going to the bathroom in a public restroom and then post it on their blog. The Wahlbergs, Real Housewives, and Honey Boo Boo — all involving families that draw millions of viewers each week who find themselves strangely curious to see the latest antics of these seemingly disparaging, self-obsessed celebrities of voyeurism. What is Jase going to do today to get on Willie’s nerves? How is the Atlanta bride-to-be ever going to be able to find a wedding dress when her mom is throwing her shoe at the bride’s best friend in the waiting room? Will Corey and Austin from Pawn Stars ever find any of Rick’s history lessons not mind-numbingly boring?

But the truth is, the Kardashians don’t own the copyrights to bizarre family quibbles. That honor goes to the first family ever on earth.

Khloe may have TP-ed and shaving-creamed sister Kim’s house, but at least she didn’t kill her in a jealous rage like Cain did to his brother Abel (Genesis 4).

And the list of family squabbles throughout the Bible doesn’t end there. Immediately after the flood subsided, Noah’s son Ham humiliated and dishonored his father when he gossiped to his brothers about the drunkenness of their dad (Genesis 9:20-23). Jacob disguised himself as his brother Esau (under their mother’s direction) in order to steal his older brother’s blessing from their blind, dying father (Genesis 27). Joseph’s older brothers conspired to kill him and leave him in a pit before finally taking pity on him and (like the good big brothers they were) selling him into slavery (Genesis 37:12-28).

And that’s just Genesis! In 2 Samuel 13 we read the story too intense for even 20/20 about King David’s son Amnon raping his sister Tamar, and then their brother Absalom murdering Amnon in revenge. One might think God should’ve left out this more extreme example of unbrotherly love from his Book, but he said, “No, let’s keep it in there. I want the whole world to read about it.” Because there’s no disguising the undeniable fact that it’s not all bear hugs and fist bumps with family. Even Jesus’ family once said of the Messiah, “Jesus has lost His mind” (Mark 3:21).

The Kardashians might feel superior to their sisters at times; the Wahlbergs may have thrown a few punches over the years; and everyone knows how much Willie and Jase love to nag their momma’s-boy little brother, Jep. But we tune in every week (sometimes like a car wreck that we just can’t look away from but know we should) and watch these families deal with each other. Maybe we don’t always (or ever) agree with how they’re treating their siblings or parents, but we’re still drawn to a family dynamic that God established and blesses as they remain loyal to each other in the end.

Many viewers may not have close-knit families at home and they find themselves obsessed with these on-screen family bickerings, wishing that they had a family who cared enough to squabble over such ridiculous things. We can’t dismiss that God created the family unit and intended everyone to live within the support of one. Multiple times his Word commands us to take special care of the widows and orphans because he knows the holes that have been torn in their lives with the passing of loved ones. And when Cain murdered his brother, God didn’t put an end to the family; instead he gave Adam and Eve another child, Seth. The family was God’s intention, no matter what ugliness may arise from it at times.

Most of the families we watch on reality television could probably benefit from heeding Paul’s words to Timothy: “Respect an elderly man. Don’t speak to him sharply; appeal to him as you would a father. Treat younger men as brothers, elderly women as mothers, and younger women as sisters in all purity” (1 Timothy 5:1–2). Sometimes Uncle Si, “Old Man,” and Khloe seem to be just asking for their family’s disrespect. But one thing all these families have in common is the financial support of those who mean the most to them. Oftentimes the family on television revolves around one who found more financial success than the other members of the family, and he or she is providing for them out of the fruits of their labor. If we’re going to throw the above verses from Paul their way in judgment, maybe we should also remember what he said just a few verses later: “Listen, if someone is not providing for his own relatives and especially his own household, then he is denying the faith and is worse off than an unbeliever” (1 Timothy 5:8). Are all God’s children watching these families they call train wrecks providing for their families in every way they can too, or are they “worse off than an unbeliever”?

The family was God’s intention, no matter what ugliness may arise from it at times.

Every family has its crazy uncles and embarrassing skirmishes, not just those with the cameras in front of them. But since the cameras are rolling anyway, we may as well tune in every now and then and see what these established-by-God families are doing today. If there’s something to learn from Amnon and Absalom, surely there’s redemption to be found in a few of the Real Housewives.

Okay, maybe just one or two of them.

Excerpted with permission from All You Want To Know About The Bible In Pop Culture: Finding Our Creator In Superheroes, Prince Charming, And Other Modern Marvels by Kevin Harvey, copyright Thomas Nelson, 2015.

Crazy families are nothing new! Do you have a few reality-TV-show-worthy dynamics and wacky relatives in your family like I do? (If not, you might want to ask around if the crazy is you!) We all have messy family stories. Come share some of your funny and nutty stories with us on our blog! We’d love to hear from you! ~ Laurie McClure, FaithGateway Women