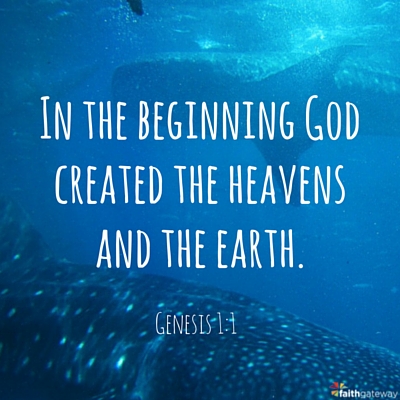 Imagine the Creator of the universe “out there” somewhere. Compared to the earth that He created, “out there” is so vast as to be immeasurable. For example, the earth is one of the smallest of the eight planets that make up a huge galaxy. But “out there” is bigger than a galaxy. In 1996, astronomers focused the powerful Hubble Space Telescope on a small and utterly black patch of space right next to the Big Dipper constellation. They left the shutter open for ten days.

What did it reveal? Three thousand more galaxies, each containing hundreds of billions of stars, planets, moons, comets, and asteroids. In 2004, scientists did it again. This time they focused the scope on a patch of darkness next to the constellation Orion. They left the lens open for eleven days and discovered ten thousand more galaxies in addition to the previous three thousand that had appeared the first time. Scientists call this the “Hubble Ultra Deep Field,” and it represents the farthest humankind has ever seen into the universe. But even more is “out there,” beyond our ability to see.

It turns out there are more than one hundred billion galaxies in the universe.

It wasn’t always this way. In the beginning God came to a place that was formless, empty, and dark. The Bible tells us “the Spirit of God was hovering” over this place before He went to work creating a space where He could enjoy fellowship with you and me.1

Yet to God, we are the crowning masterpiece of His creativity.

The story of the Bible opens with a big bang, but this big bang is not an accident. God is behind or, better, above it all. The Godhead — Father, Son, and Holy Spirit — challenged each other to the mother of all science fair projects. Creation is the result.

Genesis, the first book in the story of God’s interactions with and plan for mankind, provides us with an amazing starting point. The first two chapters of this book — familiar to most of us — describe how God created the heavens and the earth, and all that is contained within them. But creation is only the subplot of this book.

The real point of Genesis is so amazing it’s almost unbelievable: God wants to be with us.

The God of the universe has created a place to come down and be with a community of people. He no longer wanted only to enjoy the perfect community he had as the Trinity (Father, Son, Holy Spirit). The Ultimate Author of this grand story wanted to share it with us.

“In the beginning” God came up with a plan to perfectly connect his Upper Story with our Lower Story. He literally desired to bring heaven down to earth — first to create a paradise and then men and women in His own image, and then to come down and do life with us. Perfectly. Just as He had experienced perfect oneness as Father, Son, and Holy Spirit.

The first chapter of Genesis is like a page out of the Trinity Construction work log, except it reads more like poetry. The sequence and pattern are simple, but almost too overwhelming to take in. On days one, two, and three, God paints the places of the earth on the canvas. Then on days four, five, and six, He puts objects in each place to fill this space.

With the end of each day of creation, God steps back, takes a look, and records in His journal, “This is good.” But while the creation of the heavens and the earth and the other one hundred billion galaxies is impressive, it is not the point of the story. Mount Everest. The Grand Canyon. The stark beauty of the Sahara, the cascading elegance of Victoria Falls. Combine these and thousands of other jewels of his creative powers, and you’re not even close to identifying the core passion of God. Those are just the display cases to highlight His real work of art.

The pride and joy of God’s handiwork, the point of it all, is revealed in Genesis 1:

Then God said, “Let us make mankind in our image, in our likeness, so that they may rule over the fish in the sea and the birds in the sky, over the livestock and all the wild animals, and over all the creatures that move along the ground.”

The perfect and beautiful world God created was incomplete without His crowning achievement — people He could enjoy and love and with whom He could communicate. Adam and Eve, you and me, and everyone in between. He had a passion to expand the wonderful community experienced by the triune God. He longed to create the perfect environment where He could hang out with real people, and we know He was proud of this final creative act, because this time He stepped back and declared, “This is very good.”

With this final creative act, God’s plan was in place. In his Upper Story, He experienced a perfect community. He could have continued to enjoy this total oneness forever, but He wanted to share it. He desired to bring this community to a place where it could be enjoyed by others. So the Lower Story begins with God’s grand idea to set the stage and create men and women in His image and then come down and do life with us.

This is the prologue to the entire history of God and mankind. Everything begins with God. The universe, the galaxies, our little planet, men and women — all were God’s idea. His vision was to spend eternity in a perfect community enjoying the fellowship of people He created in His own image. He chose to bring you and me into the world for His pleasure, and to this day, He yearns to be with you. To walk beside you and experience all of life with you, in both the deepest valleys and the highest mountains.

Of course, the big question is: Why? Why would God step outside of his perfect Upper Story and come down into our Lower Story?

If you are a parent, you get it.

At some point in your relationship with your spouse, you wanted to share your life with another human being — one whom you would create together. In preparation for that new little human to arrive on earth, you did your best to create a perfect environment — perhaps a special room, a sturdy crib, comfy blankets, a fuzzy teddy bear, and bright pictures on the wall. With each passing month, you grew more excited, knowing that in just a short time, you would be joined by someone so special that you would do anything to protect and nurture this new arrival. Mostly, you just wanted to be with that person. Finally it was time. A tiny bundle wrapped in a soft blanket entered your life, and the joy you felt when you first looked into her face was indescribable.

So it is with God, looking into the eyes of Adam and Eve and saying, “This is very good.” And it was good — not just the creation of human life, but His plan for it. Just as parents dream of a bright future for their children, God envisioned not just a good life for us, but also a perfect one. It was almost as if God were saying, “This is going to be great. A beautiful garden. An abundance of food. No disease. No sadness. Even the lions and the lambs get along. And best of all, people to hang out with as they enjoy the pleasures of this world that I have made for them.”

Like Adam and Eve’s first chapter, your story begins with God looking into your face and saying, “This is good — this is really good.” Like any proud parent, He wants the absolute best for you. You desire the same thing for yourself, but life doesn’t always work the way you want it to. God intended for you to never suffer, but if you haven’t yet, you will. He wants you to experience perfect harmony with your neighbors, but you hardly know them. He wants you to live forever in the garden He made for you, but you will one day die — and besides, you don’t always feel as if you’re living in a garden. God dreamed a perfect life for you, but some days you feel as if you’re living in a nightmare.

In the midst of a perfect environment that God had created, something shifted. Keep in mind just how amazingly beautiful this place, Eden (Hebrew, meaning “delight”), actually was. Many scholars believe that the location of this garden was a fertile area where the Tigris and the Euphrates Rivers meet in modern-day Iraq. The Garden of Eden was a stunning acreage. Picture a lush, verdant botanical garden. Truly a perfect environment, created as a place where God could be with Adam and Eve, a perfect home where every need was met, a paradise to be shared with God forever.

When God gave Adam and Eve a perfect home in the garden, he also gave them something else: freedom. Rather than force them into a relationship with Him, He gave them the freedom to choose whether they wanted to be with Him or go it alone. To provide a way for them to accept or reject His divine vision, God set two trees in the middle of the garden. One was the tree of life, which bore fruit that when eaten would sustain life forever. The other was the tree of the knowledge of good and evil.

Even before God created Eve, He told Adam, “You can eat of any tree in the garden for food, but not this tree.”4 God told him that if he ate the fruit of that tree, he would die. What Adam didn’t understand was that with his death, the plan God had envisioned for life together with him in the garden would die too because their choice would determine mankind’s fate from that point on.

How long has it been since you sat down and considered Creation? Take some time today to think about God’s gorgeous act of Creation and that what He wants most is relationship with you! Come share your thoughts with us on our blog. We want to hear from you! ~ Devotionals Daily