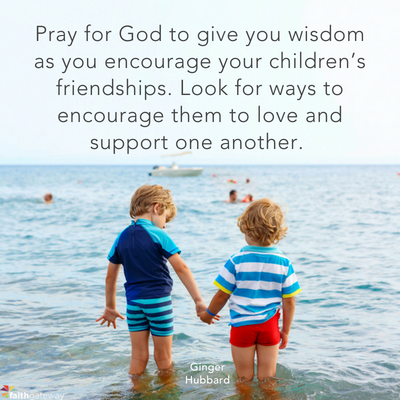 Today’s culture would like for us to believe that it is normal for siblings to not get along and not like each other. This is readily seen in the media. Rarely do movie or television siblings treat one another with respect and affection. They are usually fighting, yelling, name-calling, or belittling each other with mocking, sarcastic, and even hateful remarks.

This sort of behavior has not only become accepted in many homes, it has become expected. It is viewed as normal. However, Jesus commands us to “love one another” and to “put others above ourselves.” The sibling relationship is the best place to begin instilling these principles. Brothers and sisters who are trained to treat one another with respect and love will not only enjoy closeness during the growing up years, but will also delight in a well-nurtured, stronger relationship in adulthood. Rather than merely playing referee, here are some practical ways parents might encourage their children in a well-balanced friendship:

Have a “Serving the Other” Day

Talk about how Christ did not come to be served but to serve (Matthew 20:28). Let your children experience the joy of serving by thinking up three to five ways to serve their sibling one day each month. If needed, develop a list of ideas for “serving the other” day from which they can choose. It could be simple acts of kindness such as making sister’s bed, offering to let brother sit in the front seat with mom even though it is not his turn, or doing the other’s chores.

Make it fun. Let the child who is serving pick his/her own day and try to surprise the sibling with each task. In order for the one being served to fully enjoy the pampering, make sure the children play “server” on different days. If there are many siblings in the home, you could add to the fun by drawing names and trying to serve without the other finding out who the server is.

Teach Them to Support One Another

Require siblings to attend one another’s special events. If Hunter is playing his trumpet at a beginner band concert, attendance should not be an option for his brothers and sisters.  If Amy is performing at a ballet recital, her siblings should be there to support her with cheers. Prompt your children to encourage and build one another up verbally when they are young and it will become a precious habit as they grow.

Our daughter has been involved in theatre since she was young, and our son was required to attend all of her performances. When she was a senior majoring in theatre at University of Alabama, it melted my heart that her twenty-three-year-old brother chose to attend every performance he could, even Shakespeare. He would stand in the lobby after a Shakespeare play waiting for her to change and come out so he could tell her how amazing she was, although he didn’t have the foggiest idea of what had happened on stage. Why? Because the sibling love and support that was cultivated at a young age had blossomed into a strong and rewarding relationship in adulthood.

If your children are older and struggle with supporting one another, it’s never too late to start encouraging them. Have a talk with them about developing their friendship and go over the new expectations as a family. There may be some initial complaining, but as they begin to enjoy the new support from one another, even if it is forced for a while, they will grow to appreciate a stronger, more loving relationship.

Teach Them to Prioritize Their Friendship

It is fun to include non-related friends on outings sometimes, but if it is a prerequisite for your children’s enjoyment then it should be avoided until it is not. Don’t feel obligated to always take a friend along. Unity is cultivated on outings where siblings enjoy adventures and time together. Always taking a friend can hinder your children from bonding with each other, and cause them to become overly dependent on peers.

When my children were young, we often invited their friends over. However, I pulled the privilege of time with friends several times over the years in order for my children to focus on their own friendship. I remember a phase my son went through where he was belittling almost everything his sister said and not speaking to her with respect. We discussed his wrong attitude toward his sister, and I said, “Alex is your best friend, yet you don’t seem to be enjoying her like you do your other friends. Until you can speak to her kindly and treat her with respect, you will lose the privilege of spending time with other friends.”

Each time I cut back on their time with friends, requiring them to focus on the priority of their sibling friendship, it never took more than a couple of weeks for them to gain a new appreciation for one another. Instilling a “best friend” mentality and requiring uninterrupted time together until there is an attitude change is not punishment. It is pro-actively training them to keep their relationship right.

Guide Them to Settle Conflict

If arguing and bickering is a problem, you might have them go in separate rooms (doesn’t have to be bedrooms if they share) and not come out until they have done two things:

Pray for God to give you wisdom as you encourage your children’s friendships. Look for ways to encourage them to love and support one another. Naturally, siblings are going to argue and get on one another’s nerves from time to time, but it is important that we proactively cultivate unity and friendship. After all, there is no longer lasting relationship than that of siblings, typically lasting long after the parents have gone and long before spouses and children come along. Therefore, it is a lifelong friendship that should be respected, nurtured, and cherished.

How are your relationships with your siblings? How can you help your children cultivate great sibling friendships? We’d love to hear your thoughts in the comments!

Get Ginger Hubbard’s brand new book I Can’t Believe You Said That!: Biblical Wisdom for Taming Your Child’s Tongue and save 30% off in the FaithGateway Store!