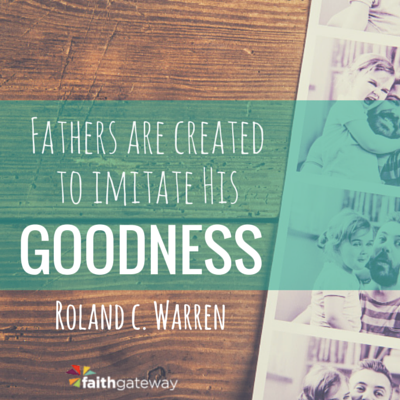 The Bible says our struggle is not against flesh and blood, but against the powers of this dark world and against the spiritual forces of evil in the heavenly realms (Ephesians 6:12).

Over the years, God has shown me that the attack on the institution of fatherhood and the strategy to make fathers unloving and ineffective is a primary goal of Satan himself. Why? Because if fathers are distant, distracted, disconnected, or even abusive, children will believe all fathers are this way, even a heavenly Father who claims to love them unconditionally.

But this is clearly not God’s plan. His desire is for all fathers to reflect aspects of His character, an earthly mirror of a heavenly reality. Matthew 7:9–11 illustrates this quite clearly. In this passage, Jesus is speaking to a group that must have included many fathers. Note what He says:

From God’s perspective, all fathers — even ones who are not Christians — are created to imitate His goodness. [tweet this]

In fact, if this were not the case, the entire analogy Jesus used loses its meaning. You see, I believe good fathers are an example of common grace, like the life-giving rain which falls on the righteous and the wicked alike (Matthew 5:45).

But there is more. When you contemplate the symbolism in Jesus’ examples in Matthew 7:9–11, a deeper meaning, especially for fathers, is evident. For example, consider the comparison of bread to a stone. Especially to a small child, a piece of bread and a small stone may look the same and feel the same. But they are not the same. Bread was, and remains today, a key source of physical life and sustenance, and it represents spiritual life as Christ’s body, which was broken for the salvation of the world. A stone, especially in the time of Christ, could be a tool of destruction and death. Remember, stones were used to martyr Stephen.

Now consider the symbolism in the comparison of a fish to a serpent. The fish is a key symbol of the Christian faith. Of note, Jesus’ first disciples were fishermen whom He transformed into “fishers of men.” These men fervently shared the good news that salvation is available for all men. In contrast, the serpent is the symbol of the Evil One who seeks to thwart the gospel and lead humankind down a path of destruction and death.

What Jesus is saying in this passage is that fathers should make sure their children have both physical and spiritual life.

Godly fathers are to provide a pathway and a connection to God’s saving grace because when they give their children “good gifts,” it makes it much easier for children to connect with a heavenly Father who gave the best gift of all — His Son, who died on a cross for their sins. So when their children hear, “Dear heavenly Father,” it’s winsome rather than worrisome.

Excerpted with permission from Bad Dads of the Bible by Roland C. Warren, copyright Zondervan.

This topic is stacked with emotion. Maybe you had a wonderful dad and have a lifetime of happy memories, and a few not-great ones — Celebrate that! But, maybe you’ve lost your dad. Maybe your dad tried his best but wasn’t a great father. Maybe your dad was a heartless, cruel man who did things that scarred you. Maybe he was just a vapor to you, walked away a long time ago leaving a gaping void. Maybe you’re working your hardest to be a good dad, but constantly feel like you fail. Maybe you have failed as a dad and are plagued with guilt. Maybe you’re a single mom and grieve for the dad you wish your kids had so you’re trying to fill both roles. No matter what your situation or your response to this important topic, God has boundless grace and healing for you. He’s eager for you to come to HIM with your Father needs! Come join the conversation on our blog! We would love to hear from you! ~ Devotionals Daily