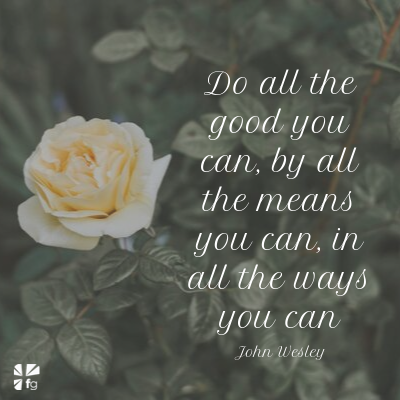 John Wesley was born into the devout Anglican home of Samuel and Susanna Wesley. Wesley’s father was a priest, and his mother taught religion to John and eighteen siblings.

When Wesley grew up, he attended Oxford, where he proved himself a competent scholar and was soon ordained as an Anglican minister. Later, he would admit that at the time of his ordination, he lacked saving faith. It was not until 1783, when Wesley attended a gathering at which someone read Martin Luther’s preface to the book of Romans, that Wesley said his heart felt “strangely warmed.” It was then that he trusted Christ alone for salvation.

Wesley was invited by fellow preacher George Whitefield to assist in his rapidly growing ministry, and Wesley soon became the new leader of the movement. However, Wesley was at odds with the tenets of Calvinism, particularly the doctrine of predestination. Soon the two preachers went separate ways.

Wesley became known for the saying,

That advice is as appropriate today as it was in Wesley’s time.

May our hearts be “strangely warmed” as Wesley’s was! May we trust Christ alone for salvation and take that conviction out into the world to do as much good as we can! Come share your thoughts on Wesley on our blog. We want to hear from you! ~ Devotionals Daily