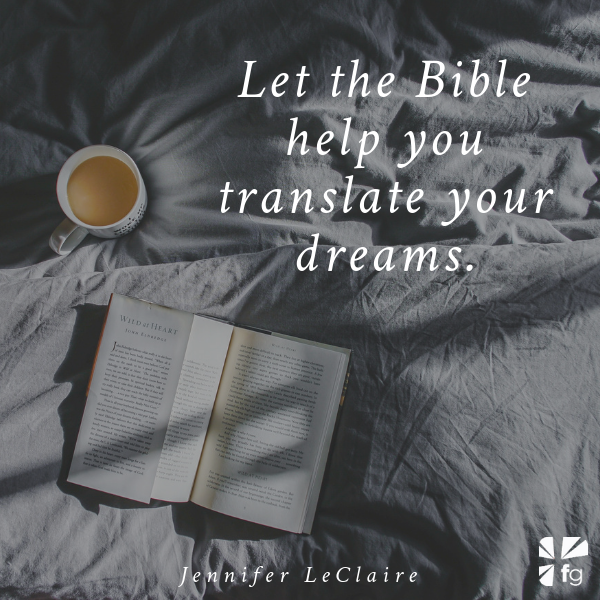 In one of the most disturbing dreams I have had, I walked into the prayer room at my ministry and it was dark. That wasn’t altogether unusual because during the worship time on Friday night corporate prayer the lights are often dimmed. In the dream, I saw two men on the platform I did not recognize. They were dressed in black.

When I scanned the prayer room I saw someone had a pillow and was sleeping at the altar. I wasn’t sure exactly what was going on. Is this a prayer lock-in? I wondered. Suddenly I received the bad news that someone had died. In the dream, I did not know who it was. I was so shaken that two people had to help me leave the prayer room and exit the building. Then I woke up.

We need to decipher every dream with God’s wisdom, but an especially disturbing dream or a directional dream demands extra caution. When your emotions are very stirred in a dream — so stirred that you wake up disturbed and have a hard time shaking the feeling — you need to pay extra attention to what the Lord is trying to show you. At the same time, emotions can get in the way of discernment.

Immediately, as I began to the interpret this dream, I wondered if someone in the ministry was going to die. I was so shaken up by the dream that my mind immediately thought of physical death. Before the end of the day, I received a call from someone pivotal in my ministry with bad news: his young son had been diagnosed with cancer.

I wondered if the dream was about the boy. Was the Lord showing me there was a death assignment against the boy? I prayed but did not bear witness to this interpretation.

So I continued to pray. I wondered if the dream was about the boy’s father, the department leader. Would he leave the ministry to care for his son? Are we losing this leader? Was it about a relational death rather than a physical death? I understood that death in a dream doesn’t always mean physical death. It can also mean spiritual death, dying to self, the death of a career, relationship, ministry, or even some sort of judgment or separation.

I knew I had to pray because I was so visibly shaken in the dream. The Lord used that dream to prepare me for what was coming — to pray to guard my heart. The pillow in the dream rep- resented resting in faith and in the context of the prayer room it translated to me as resting in faith through prayer. So I prayed for God to help me brace myself for what was about to happen. I refused to become fearful about it. I refused to dread what was coming. I kept the matter in my heart and considered it from time to time, but I did not let it consume me.

It was less than two months before this dream came to pass. While I was putting the ministry in order, I moved some people to different positions and ask others to take a break for a season while we reorganized. One woman was offended and hurt by the reorganization and not only left the ministry but also severed a friendship that was nearly two decades old. This could have been devastating for me on a personal level, but it wasn’t — because God had prepared me through my dream.

What would normally have been a very emotional separation — an overwhelming emotional shock — surprised me but did not stir me at all. God warned me ahead of time and my response was to pray.

There was another aspect to this dream that I could not grasp until after the dream was fulfilled: the two strangers in black. I believed from the beginning these were evil spirits. I pondered, studied, and prayed about these two men in black for weeks and could not get any clear understanding of what spirits these signified. During the transition, two people were offended and left the ministry. A spirit of offense was talking to these people and tempted them to leave when their positions shifted.

Finally, parts of the dream were not clear until after the dream manifested. The Lord showed me after the fact what spirits were involved. Was He trying to warn me about the spirit of offense beforehand so I could pray against it? Perhaps. Maybe I missed that part. I still don’t know. But I do know that after the people left the ministry — after this pruning — there was great growth.

Steps to Interpreting Dreams with God

Let’s explore steps to interpreting dreams with God’s wisdom. If you’ll use these steps as a guideline — and stay prayerful — you will be well on your way to decoding your dreams.

Write Down the Dream

I can’t stress this enough — write down your dreams. Write them down and judge them later. Even if a dream is from your soul or from the enemy, it can be useful. Dreams reveal things about ourselves or about the enemy’s plans for our lives that we might otherwise not see or understand.

Pray Through the Dream

Your emotions will provide major clues about the meanings — and this is also subjective. Skydiving in a dream may make one person feel alive but scare another person terribly. You will not feel strong emotions in every dream you have, so pay close attention when you do. It’s a point of reference for God to show you some- thing that you need to face emotionally.

Context means “the parts of a discourse that surround a word or passage and can throw light on its meaning” and “the interrelated conditions in which something exists or occurs; environment; setting,” according to Merriam-Webster’s dictionary.

Look for the Lord’s Broad Brush

Every detail in a dream has some significance. God doesn’t do anything without a purpose. Especially in longer dreams, however, we can get so bogged down in the details we miss the picture the Lord painted for us with a broad brush. Look at the big picture. Is the Lord saying something about your career, your family, your heart? What is the general theme of the dream? Once you have identified the overarching message, interpreting the details will be easier and not so confusing.

Asking the who, what, when, where, and how can answer a lot of your whys as you pray through the dream.

Dive into the Details

It’s been said, the devil is in the details. But I’m here to tell you God is in the details. Explore every facet of the dream you can remember. Sometimes small details completely change a dream’s meaning. Details can be vital, from colors of shirts to names on street signs to the weather outside and more. When you seek help from someone in interpreting the dream, remember to share the details.

Sometimes dreams will parallel scriptural truths, such as fighting a giant or crossing a river or facing a mountain. If you dream of mountains, look up what the Bible has to say about mountains. Let the Bible help you translate your dreams. Although there may be many different applications of mountains in Scripture, as you study the Word of God He will often emphasize or highlight the verses in the context of what He is saying. When you get to the right Scripture, He’ll make sure you know it. Clarity and understanding will come.

Understand that the dream may have different levels of interpretation. God could be saying one thing to you but as you share your dream with someone else who was in your dream, they might see something that you didn’t because, yes, God can even speak to others through a dream He gives to you. The dream also could mean one thing now, but more revelation could unfold that would be helpful in your future. This is another reason you should record your dreams.

If a dream is troublesome or you feel strongly that there is a deeper meaning you can’t unlock, pray about submitting it to someone who can help you discover what God is saying — and be willing to pray about what they share to judge their interpretation. Not everyone has the gift of interpreting dreams, but sometimes God will show the leaders under whom we serve what He is saying because they are stewards of your soul. Hebrews 13:14 says,

Obey those who rule over you, and be submissive, for they watch out for your souls, as those who must give account. Let them do so with joy and not with grief, for that would be unprofitable for you.

The Interpretation Belongs to the Lord

Before setting out to interpret the dreams of the butler and the baker from Pharaoh’s house, Joseph said,

Do not interpretations belong to God? — Genesis 40:8

Gill’s Exposition of the Entire Bible offers more insight into this: “For as dreams themselves, which are of importance, and predict things to come, are of God; for none can foretell future events but he, and such to whom he imparts the gift of prophecy; so none can interpret dreams with any certainty but God himself, and those to whom he gives the faculty of interpretation of them.”

We need to work with the Spirit of God to unlock interpretations.

But the natural man does not receive the things of the Spirit of God, for they are foolishness to him; nor can he know them, because they are spiritually discerned. — 1 Corinthians 2:14

Our natural minds can be helpful in assimilating dreams for interpretation but ultimately the accurate interpretation is informed by the God who gave you the dream.

Do you have dreams and wonder if they may be from God? Some of them are! Come share with us on our blog how God has used dreams to shape your life and give you direction and protection. We want to hear from you! ~ Devotionals Daily