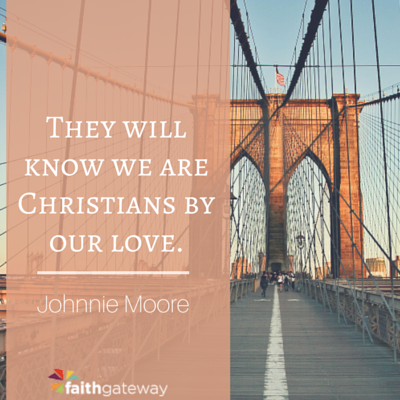 You know, I totally get it. I know why people aren’t that engaged in caring for the Christians — and others — whose lives are being threatened by ISIS.

It’s not that they don’t care about them, it’s that they don’t care for them, and the reason why is because it’s hard to invest your time, money, and energy in a cause so distant from you, so confined to the other side of the world, and so irrelevant to your everyday life. We’re all caught up in our normal lives. We’re taking care of our families and taking care of our jobs, and trying to squeeze some meaning into the ounce of free time we have remaining after all the other things competing for our attention.

It’s just hard to turn our eyes to Iraq or Syria when there’s so little of our attention to go around in the first place. Not to mention, this particular part of the world seems plague-ridden, and it has received — in the views of many — “enough” time, attention, and money from the West. But,  it should be apparent that ISIS is a very real threat to our very real lives, and we simply don’t have the luxury of being disengaged from this crisis. This isn’t a crisis “confined” to another part of the world. It’s anything but confined. It’s running wildly all over planet earth, and it’s growing at a rate that ought to cause us all to shudder.

When the world gets fed up with something (like Ebola), it reacts fiercely, decisively, and comprehensively. Around dinner tables families discuss the issue, everyone gives a little money to someone working on the cause, churches and community organizations rally others to it, and there’s a certain sense of personal responsibility at the heart of it all because we have a very real belief in the potential personal repercussions.

In this case, as a Christian, this is particularly poignant for me. For while the ISIS crisis weaves its harmful and consequential effects into many aspects of our society, its threat to my “brothers and sisters” in Christ is a family affair.

We really have no option.

We must raise our voices.

We must rush to help.

The lack of concern for this crisis isn’t for a lack of information. We’re living in a world where one can educate oneself about almost anything, and it’s essential that we do it. On Twitter, for example, I follow journalists who are covering Iraq and Syria for major international news networks. I also frequent the websites of Al Jazeera, France 24, BBC, Rudaw, and Iraqi News. They are all in English, and you can get a very good understanding of what’s happening firsthand by what you read there. You should be reading from these sources, as well, to educate yourself so you can speak with understanding and with authority to others who might care if they knew.

Additionally, so many Western Christians are from Protestant and Evangelical traditions, where we have a tendency to discount the contributions of Catholic and Orthodox communities in the preservation of our faith in the Middle East. We must educate ourselves on these communities; get to know their stories and their leaders. Read books about them and expose yourselves to their history and their current circumstances.

Give to Those Preserving and Rebuilding Society

Then, you should provide practical assistance to those on the ground who are working hard to rescue those in harm’s way and to restore those whose lives have been destroyed by ISIS.

We mustn’t expect governments to take care of the problem. In particular, Christian communities have never found it acceptable to outsource their kindness to governments, but they have always accepted responsibility to deliver their kindness on behalf of Jesus directly to those who are in harm’s way.

Governments inevitably calculate their decisions according to numerous geopolitical concerns. Governments are rarely fast, rarely efficient, and rarely thorough. They almost always engage too late, and seldom work with objectivity. Governments ought to be batting cleanup for the Christians, and other religious communities around the world, who are commanded by their faith to step into crises with compassion.

Don’t Underestimate or Oversimplify the Crisis

Too often, people fail to understand the complexity of global issues. They come to conclusions, misinterpret what they observe or hear, and can sometimes exacerbate the problem by their uneducated approach or their lack of humility or understanding.

In order to understand why Iraq and Syria have become safe havens for terrorists, and in order to discover the solution, you must have a thorough handle on the politics of at least the United States, the United Kingdom, France, Germany, Iran, Iraq, Israel, Jordan, Lebanon, Russia, Bosnia, Saudi Arabia, Syria, Yemen, and the list goes on and on. These are not easy questions, and there are not easy solutions. Just as soon as you think you’ve come to a conclusion, you ought to immediately become skeptical of your newfound confidence. For — as I would often tell my students — “everything is always more complicated than it seems.”

ISIS will only be defeated, and that region of the world will only be stabilized, through the cooperation of Eastern and Western countries, and through the collaboration of Christian, Jewish, and Muslim leaders. When Christians raise their voices with incendiary rhetoric, they not only demonstrate their lack of understanding, they alienate the very people who are more than willing to align themselves with us in order to address that which threatens us all and which we can only solve together.

Seek to understand before you speak as if you understand.

Seek to work with those who believe as you even though they embrace a faith different than your own.

We must also reach out to those communities that have the potential to facilitate radicalism. One of the great tragedies of our time is that despite living in an enormously diverse world, we rarely know the names, stories, and beliefs of those who are different than us. This lack of relationship allows us to come to conclusions about one another, and when incubated in poverty, disenfranchisement, or under the influence of a compelling and harmful teacher, it can cause enormous harm to society.

People are not born terrorists. They are made to be terrorists by a wicked brew of circumstances that normally involves poverty or disenfranchisement of some kind, coupled with the powerful ideological influence of a teacher or mentor, and a misunderstanding of “the other.”

It’s no coincidence that radicalism metastasizes within disenfranchised communities and the poor immigrant communities of the West — where hopelessness draws them to a desperate search for meaning in sometimes dangerous places. Many of those who eventually find radicalism could have found another path, a more hopeful path. But once they find themselves on a path of hatred, it’s nearly impossible to break free from its grip.

Only love kills hate, and proactive love hedges against hate.

It has never been more important to get to know others who are different than you. The truth is that most ISIS sympathizers have never had a meaningful interaction with a Christian before. They’ve never been the recipient of Christian kindness or generosity. Their misguided perspective of Christianity isn’t unlike the perspective that some Christians have of Islam, for it’s much easier to hate those you’ve never met. And many of those who hate Christianity come to their hatred having never benefited from the best of our faith.

They package our faith within the context of our country’s politics and assume that Christianity is synonymous with all kinds of things, except the one thing that we ought to be synonymous with — love.

It has never been more important for Christians to love and serve their communities, and to demonstrate their true faith in the heart of those places where an inaccurate perspective of their faith exists. For centuries, Christians cared for their communities. One particularly anti-Christian official in the Roman Empire once remarked that “the godless Galileans care for our poor and their own.”

From the very beginning, Christians were known in their communities as those who brought light into darkness, and cared for people in need — especially the “other,” whoever the “other” was.

Somehow, we seem to have lost our sense of self, and rather than flooding the world with our abundant love, we’ve left our faith to get rebranded and abused and misinterpreted and taken advantage of.

Jesus gave us good advice that has never been more needed than it is today,

The fact is that in much of the Middle East these ancient Christian communities coexisted with Islam for centuries, precisely because they were known to be friends of all, enemies of none, and filled with love and kindness.

Whether or not you believe war was justified, the unmistakable fact is that over the last twenty years, increasing military engagement in the region by Western powers has caused a rebranding of Christianity in the Middle East — allowing radical Muslims to be able to define Western war as a new crusade of Christian countries against Islamic ones.

They’ve taken advantage of it all and built a narrative that is being embraced all over the region. The reputation of love that persisted for centuries in these Christian communities has been replaced with an accusation of holy war.

Every act of love is a dagger in the heart of ISIS.

May they bleed to death.

Are you engaging with your family, friends, and community about ISIS? What are you reading about the complexities and history that you encourage others to read? As Christians, we’re called to be known by our love. How can you reach out in love to those who are different from you in your community and around the world? We would love to hear from you! Please join the conversation on our blog!