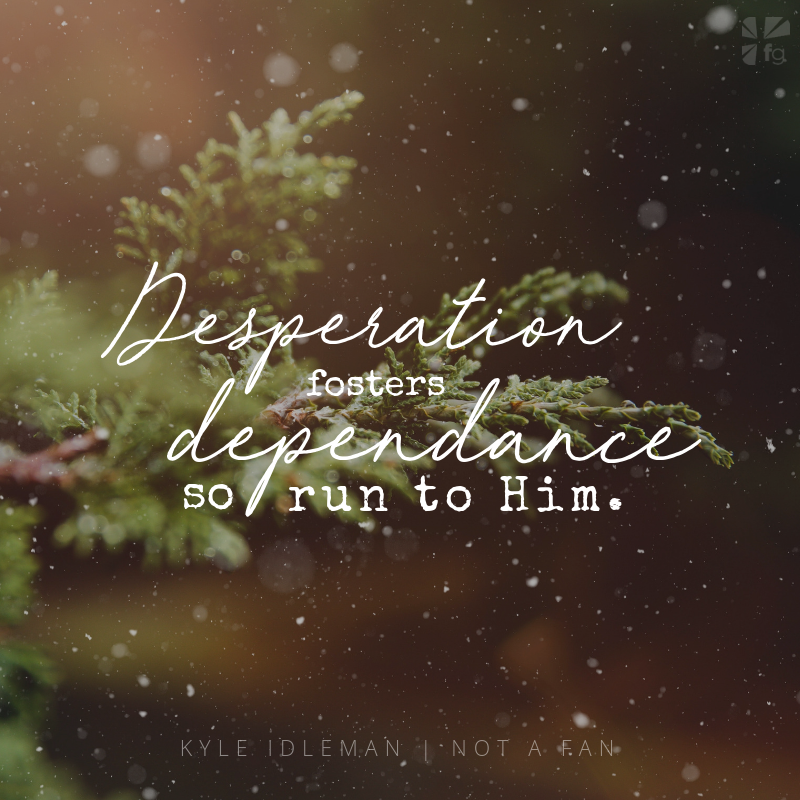 Listen to my cry, for I am in desperate need; rescue me from those who pursue me, for they are too strong for me. — Psalm 142:6

Years ago, when my second daughter, Morgan, was about two years old, I arrived home from my church office early one afternoon I was eager to spend a little extra time with my young daughter. My wife informed me that Morgan had been sleeping for a while, but gave me the green light to go upstairs and wake her from her nap. I opened the door to her room and quickly noticed two things: First, her dresser had toppled over on the floor and made quite a mess — an obvious, but not necessarily alarming, observation. Second, I noticed that Morgan was not in her bed. Again, easily apparent, but not especially concerning. Until I connected this second fact to the first. In only a few seconds, I realized what had happened. In an attempt to reach something on top of her tall dresser, Morgan had pulled out the lower drawers and started climbing when the entire dresser crashed over on her small body.

I struggled to lift the heavy furniture up as quickly as possible. Underneath, my daughter was lying still, her body already severely bruised and swollen I called out for my wife to get in the car, scooped up my unresponsive little girl, and we began speeding to the hospital. My wife sat with our daughter in the back seat and immediately began praying.

While she was praying, I was dialing 911 and there was no answer. To this day, it is the only time I have ever needed to dial that number, and the phone simply rang and rang. I hung up and dialed again. Still no response. So I threw the phone in the passenger’s seat and joined my wife in her out-loud prayers. Not just any prayers, but passionate, anxious, emotion-filled prayers. Prayers of desperation. Prayers through tears.

The good news is after a number of months Morgan made a full recovery, but I’ll never forget the feeling of desperation as I called out to God. Have you ever found yourself in that kind of moment? The time when you had no idea how you would pay the mounting medical bills. The day you came home and found the note from your runaway child. The night your husband stormed out of the house. The appointment where you learned it was cancer. The officer at your door with a bowed head and a tragic report. The silent ultrasound. The joyless marriage. Your first Christmas without her.

Here’s what I hope you’ll realize: In your moments of greatest desperation, you’ll discover that you can depend on Jesus. Desperation fosters dependence. So run to Him.

Cry out for Him. You’ll find a friend who sticks closer than a brother. You’ll experience a peace that surpasses your understanding. You’ll climb into a strong refuge and a safe hiding place. You’ll get to know Him as Immanuel, “God with you.” And you’ll learn that He can be depended on when you need Him the most.

Read Psalm 88. What words of the psalmist can you identify with? Recall a desperate moment or season in your life. Where did you run for help? Write out several lines of a prayer that begin with this phrase: “I need You to help me with…”

Excerpted with permission from Not a Fan Devotional by Kyle Idleman, copyright Kyle Idleman.

Have you ever prayed desperate prayers? Have you ever found yourself crying out to Jesus in a crisis or emergency… and discovered Immanuel… God with us? Read Psalm 88 today. Come share your thoughts with us on our blog. We want to hear from you about calling out to the One who sticks closer than a brother.