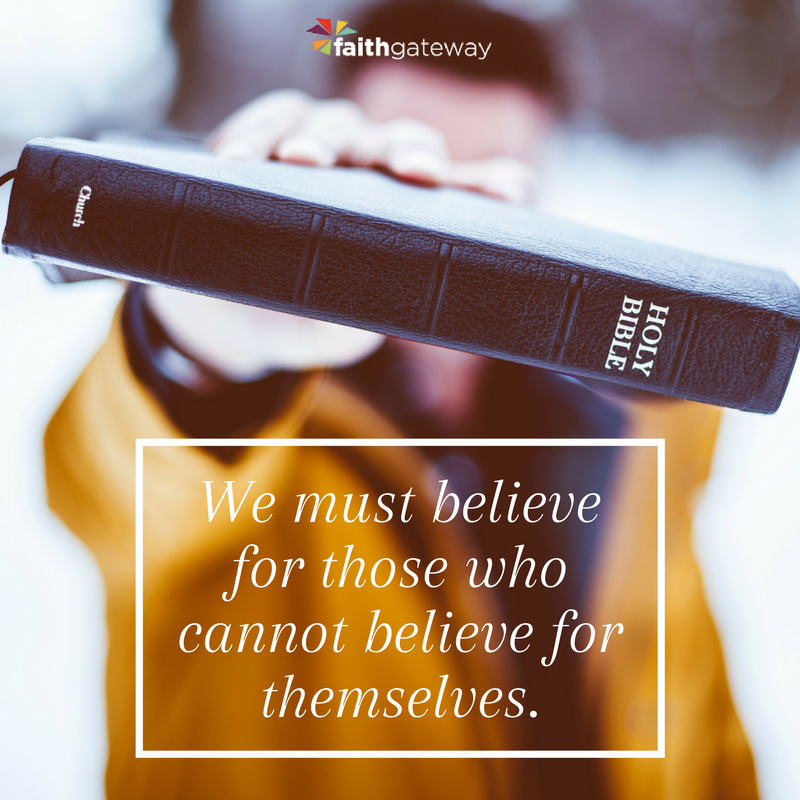 “Let My people go,” demanded God through the lips of Moses and Aaron.

“Why should I?” responded Pharaoh, behind whom stood the enemy of men’s souls.

As soon as the demands were made, the situation worsened for the Israelites. Pharaoh tightened his grip on them and told the taskmasters to make the Israelite slaves’ lives even more miserable than before. He said,

Make the work harder for the people so that they keep working and pay no attention to lies. — Exodus 5:9

When we are trying to deliver people “out of Egypt,” it may seem at first as if things get worse. This can almost be a good sign for us when we are praying for loved ones, for as we come in prayer in the name of Jehovah God, seeking to demand that Pharaoh release the slaves he controls, we can expect him to do just what Pharaoh did and tighten his grip. Pharaoh and his army usually show up if we get serious about winning people to God’s cause.

The Bible tells us not to be ignorant of the Devil’s devices (2 Corinthians 2:11), so we need to know how to watch out for them.

I remember the Reverend Dick Rees, a pastor in Britain, speaking about how he witnessed to his brother, Tom. Tom became antagonistic toward the gospel and toward his brother, the gospel’s messenger. In fact, the more people prayed for him, the worse Tom’s attitude became. He not only wouldn’t listen to Dick, but he became even more bitter, just like the Israelites, who “did not listen” to Moses “because of their discouragement and harsh labor” (Exodus 6:9).

This apparent hardening of attitude tells us something. Satan is worried.

Pharaoh wouldn’t listen to God’s representative, and neither would the children of Israel. So God decided to add another voice: the voice of the plagues. God is in charge of the world that He created. He controls its laws, and He can interrupt and reverse them at will. He controls the creatures He made. Sometimes God manifests His power through nature in order to bring men and women to realize His power and authority.

Exodus 7-8 tells us that water became blood, and the Nile teemed with frogs that came into the Egyptians’ houses, into Pharaoh’s palace, and even into people’s beds! The magicians of Egypt mimicked some of these miracles, but there came a point where they could no longer work their magical arts. Yet Pharaoh was not persuaded in his heart that this was “the finger of God,” and he remained adamantly opposed to any Israelite demands.

Moses and Aaron went to Pharaoh again and asked him to let the people travel away from Egypt into the desert to worship God.

“Let my people go, so that they may worship Me,” God demanded through His mouthpiece (Exodus 8:1). As Jesus said,

We have been told that we should serve God only (Matthew 4:10). The problem with many people today is that they think they can serve God in Egypt. They think going to church or saying prayers, reading the Bible, or just believing in God is serving Him and is quite enough religion. But the service God required was in Canaan, in a different dimension altogether. He is not interested in our practicing religion, but rather in our finding reality in religion.

In other words, if we haven’t accepted God’s way of escape from Satan through Christ, it doesn’t matter how many times we go to church or do religious things; we cannot please God! God told Pharaoh that His people needed to be free from Pharaoh’s jurisdiction and released to offer acceptable sacrifices in another place altogether (Exodus 3:18). But the Lord “hardened Pharaoh’s heart,” and the ruler of Egypt wouldn’t let the Israelites go out of his country (Exodus 10:20). Pharaoh was doing the Devil’s work for him!

It is always a very dangerous thing to do to harden your heart. If you harden it long enough and often enough, God will harden it for you in the end. He will give it a fixed setting.

So God began to make natural phenomena behave in an unusual way. If we won’t pay attention to the still, small voice of the Spirit of God that insists that God is worth listening to, then God has to use a megaphone. This He did in the book of Exodus. He used polluted water, famine, corrupted crops, ecology, sickness, and death. Still Pharaoh hardened his heart. The same situation exists today.

People can be like Pharaoh and not respond to God because of their adverse circumstances.

They were seared by the intense heat and they cursed the name of God, who had control over these plagues, but they refused to repent and glorify him.

In verses 10–11, the writer stated that the people suffering from another God-permitted plague “gnawed their tongues in agony and cursed the God of heaven because of their pains and their sores.”

The plagues that God allowed to affect the Egyptians resulted in a reaction of defiance. Actually, the king of Egypt acted like many of us do. While the plague was oppressing him, he softened; but when respite came, he hardened his heart. That sort of behavior isn’t too different from ours or from that of some unbelievers I know.

It wasn’t that Pharaoh and his servants weren’t convinced God was speaking to them either. “This is the finger of God,” his magicians exclaimed after Moses’ rod swallowed up theirs (Exodus 8:19). Everyone recognized the power of Satan, and even the unbelievers recognized that the power of God was greater. Yet they continued to defy Him.

The people in Egypt who really wanted to believe in God and His promises, on the other hand, began to see the finger of God and hear the voice of God in the awful happenings around them. Those who were about to be delivered began to dare to look up, for their redemption was near. They were ready. At last, they recognized Moses as God’s spokesman and experienced the results of his prevailing prayer on their behalf. They even felt the tyrannical grip of Pharaoh loosen. But then Pharaoh began to bargain, as Pharaoh always will when his hand is forced.

The proposals that Pharaoh offered to the children of Israel are the same proposals Satan offers people today: “Be a nominal believer. Keep letting Satan, not God, rule your life. By all means, look like a Christian on Sundays, but be yourself when no one’s looking!” Satan has to think up a proposal that will encourage his slaves to decide to stay in Egypt of their own free will. So Pharaoh told Moses and Aaron,

What Pharaoh was suggesting was, “Look like a real believer but don’t act like one!” That reminds me of Paul’s description of some people in his day:

having a form of godliness but denying its power. — 2 Timothy 3:5 NKJV

I was once asked to have a young girl stay in our home. She was only sixteen years of age, and her parents were nearly out of their minds because she was seeing a twice-married man who was still married! The man’s wife was not aware of his affair, but the girl’s parents had discovered the relationship and wanted to get her away from the situation for a time.

The parents of the girl, however, were not believers, and they did not want their daughter to become overly religious. They attended church, but that was as far as their spirituality went. Yet they wanted their daughter set free from the particular taskmaster of promiscuity. So they said, “Please, Jill, have her live with you, but don’t convert her to your faith or anything like that! We just want her to have enough religion to make her respectable.” In other words: “Sacrifice in Egypt! Teach her to look like a Christian and behave a little like a real Christian, without leaving her sin behind and turning to Christ.”

It’s the same as the proposal of Pharaoh, for Satan knows that

because our sinful appetites will no longer control us. That means coming out of Egypt altogether, into a totally new experience. However, it doesn’t work to pretend we are free when we are not. We have to face reality and walk away from the task-masters of sex, drugs, lies, or stealing, and start a whole new life.

Having failed to get Moses to comply with his request, and after a horrible plague of flies that got his attention for a short while, Pharaoh suggested another idea with the same end in mind. “Stay in sight. Don’t get too involved. You can leave, but you don’t have to go very far away. Why not leave an escape route so you can come back and serve me if you don’t like it out there?”

I will let you go to offer sacrifices to the Lord your God in the wilderness, but you must not go very far. — Exodus 8:28

Now, that sounds familiar. Today, people say, “If you must get into all this extreme Christianity, don’t go too far. Don’t get fanatical. You don’t need to go overboard with this religious thing. People will think you are weird, and you will lose all your friends!” That’s a bit like a little boy who fell out of bed one night. When his mother asked him what had happened, he said, “I guess I stayed too near where I got in!” Exactly! Many people are tempted by Pharaoh to do just that — to stay too near where they get in. They decide not to go too far in their discoveries of the Christian faith walk. “Leave your options open,” Satan suggests. “Stay in sight of the old life.” But this will never work, for you can’t even see Canaan — the land of freedom and blessing — from Egypt. You need to make the journey out of the lifestyle you have been living into a whole new world. Moses answered this as he had the previous proposals, saying, in essence:

The Lord God of the Hebrews says, ‘Let My people go.’

Excerpted with permission from Here Am I, Lord… Send Somebody Else by Jill Briscoe, copyright Jill Briscoe.

Bringing people to Jesus Christ is a battle. In the spiritual realm and oftentimes in the physical realm. But, it’s worth it for their freedom! Pray today along with God, “Let God’s people go.” Come share your thoughts with us on our blog. We want to hear from you! Who are you praying for? ~ Devotionals Daily