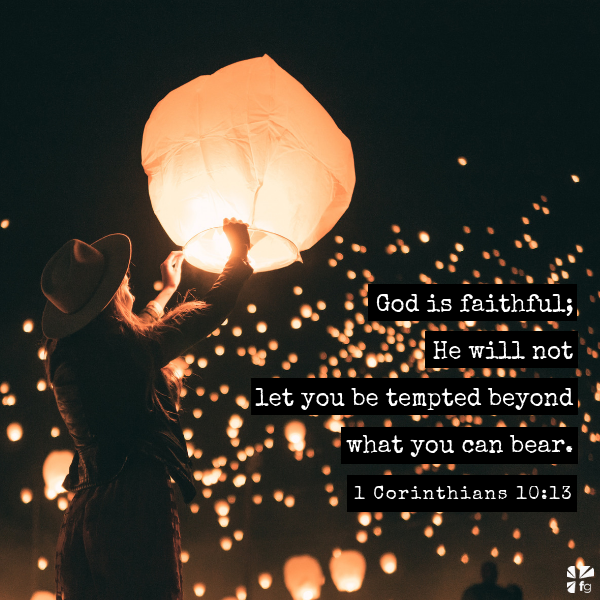 No temptation has overtaken you except such as is common to man; but God is faithful, who will not allow you to be tempted beyond what you are able, but with the temptation will also make the way of escape, that you may be able to bear it. — 1 Corinthians 10:13

Early on in my Christian pilgrimage, I discovered the value of Scripture memorization. First Corinthians 10:13 was the first verse I ever deposited in the memory bank of my mind. Because I had hidden this verse in my heart, only God has recorded how many times across the years — when I found myself faced with some sort of temptation — it surfaced in my memory and kept me from many a potential mistake. Scripture memorization plays a vital role in overcoming temptation.

It is not a sin to be tempted.

Temptation comes our way in all sorts of forms and sizes. Our minds are like a hotel. The manager cannot keep someone from entering the lobby. However, he can certainly keep that person from getting a room. Likewise, it is not a sin when a temptation passes through our mind. The sin comes when it does not do that, when it doesn’t pass through our mind. The sin comes when we give that thought a room in our mind and let it dwell there.

Let no one say when he is tempted, ‘I am tempted by God’; for God cannot be tempted by evil, nor does He Himself tempt anyone. But each one is tempted when he is drawn away by his own desires and enticed. — James 1:13-14

The devil never made us do anything. He simply dangles the bait in front of us. Then we are tempted; we are “drawn away by [our] own desires and enticed” by that which is outside the boundaries laid out for us in God’s Word.

Make no mistake about it: we will be tempted. As long as we are encased in human flesh, it desires to rebel against what is good and godly. We never have to teach our children to disobey. They pick right up on it. We have to teach them to obey. So it is with us and the issue of temptation. It is a reality that is not going to go away. Consequently, it behooves us to know how to deal with temptation when it comes.

Some people live with the erroneous concept that the longer we walk the Christian path and the deeper we go with God, the less we will be tempted. None of us will ever arrive at the place when temptation will not be looming before us in some form or fashion.

Most of the great heroes of the Bible faced their greatest temptations near the end of their pilgrimage rather than in the beginning.

This was certainly true of Moses, Elijah, and David.

There is a word of assurance here for those who may feel a sort of pseudo guilt over being tempted: it is a reality. “No temptation has overtaken you except such as is common to man.” It is inevitable. Temptation is “common to man.”

Life may have its shadows, but one thing is certain: they are never caused by God’s turning or by His changing. He is faithful.

James reminded us that “every good gift and every perfect gift is from above, and comes down from the Father of lights, with whom there is no variation or shadow of turning” (James 1:17).

Years ago, while in the process of memorizing James 1:17, I found myself one night in a parking lot standing under a light. When I stood directly under it, no shadow was cast. However, as I stepped away from the light, I began to see my shadow in front of me. The farther I walked, the larger the shadow, until finally I walked far enough to be in the darkness. The shadow was caused by my turning, my changing, and not by the light. Difficulties in life are never caused by God’s turning or changing. We can rest in the reality that even though we may be tempted, we have a Lord who is faithful.

God provides a way of escape for us.

The word picture here is of a mountain pass. The idea is of an army that is apparently surrounded, and then suddenly they see an escape route to safety through a mountain pass.

None of us needs to succumb to the temptations that come our way. Jesus will make a way of escape. Many who have fallen into sin did so willfully because they refused to take the path of escape that the Lord put before them.

You say, “I am tempted.” The Lord says, “What else is new? I, too, was tempted in all points as you, yet I was without sin” (Hebrews 4:15). Jesus taught us how to overcome our temptation. For forty days He was tempted by the devil in the wilderness of Judea. On each occurrence, Jesus overcame by quoting Scripture.

The Word, hidden in our hearts, will also keep us from sin when applied by faith to our lives.

We should not be surprised when temptation comes our way. It is, after all, “common to man.” But Christ Himself is our way of escape. And one thing can certainly be said of Him — “He is faithful.”

Meditate on the words of James:

Blessed is the man who endures temptation; for when he has been approved, he will receive the crown of life which the Lord has promised to those who love Him. — James 1:12

Have you ever felt guilty for being tempted? Have you ever felt as though after years of walking with Christ you should not be tempted any more? Does your spirit feel cautioned at the reminder that so many of the Bible heroes faced their greatest temptations near the end? Spend some time with God today and ask Him what areas of your life you need to be particularly careful about, especially conscientious. Please leave a comment on our blog! We would love to hear from you! ~ Devotionals Daily