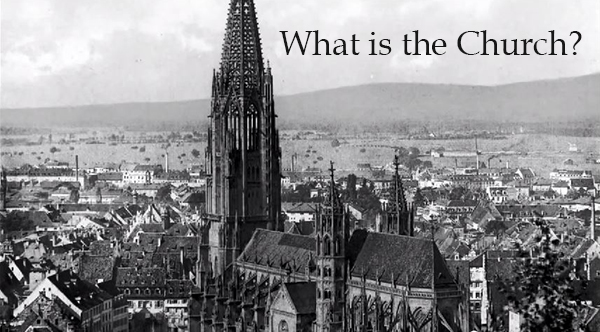 The movement upward [toward God] cannot be separated from the movement toward our neighbor. Both belong indissolubly together . . . Standing under God’s rule means living in community with God and with the church.

In his diary Bonhoeffer recorded that Palm Sunday was “the first day that something of the reality of Catholicism dawned on me, nothing romantic or the like, but rather that I am beginning, I believe, to understand the concept ‘church.’”

This new idea forming in the eighteen-year-old’s mind that day in Rome would end up having profoundly significant ramifications.

The occasion for his epiphany that day was a Mass at St. Peter’s performed by a cardinal, with a boys’ choir whose singing took his breath away. A host of other clergy, including seminarians and monks, was at the altar: “The universality of the church was illustrated in a marvelously effective manner. White, black, yellow members of religious orders—everyone was in clerical robes united under the church. It truly seems ideal.” He had likely been to a Catholic service in Germany, but now, in Rome, in the Eternal City, the city of Peter and Paul, he saw a vivid illustration of the church’s transcendence of race and national identity. It obviously affected him. During the Mass, he stood next to a woman with a missal and was able to follow along and enjoy it all the more. He gushed over the choir’s singing of the Credo.

To think of the church as something universal would change everything and would set in motion the entire course of Bonhoeffer’s remaining life, because if the church was something that actually existed, then it existed not just in Germany or Rome, but beyond both. This glimpse of the church as something beyond the Lutheran Protestant Church of Germany, as a universal Christian community, was a revelation and an invitation to further thinking: What is the church? It was the question he would attack in his doctoral dissertation, Sanctorum Communio, and in his post-doctoral work, Act and Being.

But Bonhoeffer was no mere academic. For him, ideas and beliefs were nothing if they did not relate to the world of reality outside one’s mind. Indeed, his thoughts on the nature of the church would lead him into the ecumenical movement in Europe, causing him to link hands with Christians outside Germany, and therefore to see instantly the lie at the heart of the so-called orders of creation theology, which linked the idea of the church with the German Volk. This idea of a church defined by racial identity and blood—which the Nazis would violently push and so many Germans tragically embrace—was anathema to the idea of the universal church.

So it was on this Palm Sunday in Rome that Bonhoeffer’s course was set in motion.

Ideas had consequences, and this idea, now just budding, would flower in his opposition to the National Socialists and bear fruit in his involvement in the conspiracy to kill a human being.

Watch the Bonhoeffer Study – Session 1: What Is the Church? (20 minutes)

As you watch, use the outline provided to follow along or to take additional notes on anything that stands out to you.

Dietrich Bonhoeffer was a pastor and a theologian. He had a passion for truth and a commitment to justice on behalf of those who face implacable evil.

Bonhoeffer was a member of the Igel (pronounced “eagle”) fraternity at Tübingen University in 1923. Igel is the German word for hedgehog.

Karl Bonhoeffer wanted his children to think clearly—to follow rigorous logic to a conclusion and not be sidetracked by emotions. This was part of the Bonhoeffer family culture.

At 18, Bonhoeffer decided he wanted to spend a semester studying in Rome. There, he encountered a larger vision of the church:

The universality of the church was illustrated in a marvelously effective manner. White, black, yellow members of religious orders — everyone was in clerical robes united under the church. It truly seems ideal.

At 21, Bonhoeffer completed his doctorate on the topic, “What is the church?”

At 22, he spent a year in Barcelona, Spain, as the assistant vicar at a German-speaking church.

At 24, he studied at Union Theological Seminary in New York City.

Bonhoeffer’s cosmopolitan upbringing and the rigorous tradition of thinking clearly led him to think beyond national lines when it comes to the church.

Bonhoeffer’s quest for truth meant  asking, “What is God’s idea of Germany?” Ultimately, this led him to reject Hitler and the political doctrine of the Nazi party called National Socialism.  What does this mean for us today?

We have to consider Bonhoeffer’s idea of a pure search for truth.

We need to take seriously the question, “What is the church?”

We ought to be challenged, and to think these things through without fear.

To confess and testify to the truth as it is in Jesus, and at the same time to love the enemies of that truth, his enemies and ours, and to love them with the infinite love of Jesus Christ, is indeed a narrow way. To believe the promise of Jesus that his followers shall possess the earth, and at the same time to face our enemies unarmed and defenseless, preferring to incur injustice rather than to do wrong ourselves, is indeed a narrow way … If we regard this way as one we follow in obedience to an external command, if we are afraid of ourselves all the time, it is indeed an impossible way. But if we behold Jesus Christ going on before step by step, we shall not go astray.

1. What part of the teaching had the most impact on you?

2. Attending a mass in Rome, the 18-year-old Bonhoeffer witnessed an “ideal” picture of Christian community when he saw “white, black, yellow members of religious orders . . . united under the church.” Having been raised in a German Lutheran congregation, it was an experience that gave Bonhoeffer a much larger vision of the church.

What foundational truth or truths about the church are embodied in the experience you just described? In other words, based on your experience, how would you complete the following sentence: The church is . . .

4. Among the first pictures the Bible provides of the church — and one that Bonhoeffer relied on in describing his understanding of the church — is the following passage from Acts 2. Read each verse aloud. As the passage is read, underline any words or phrases that stand out to you.

All the believers devoted themselves to the apostles’ teaching, and to fellowship, and to sharing in meals (including the Lord’s Supper), and to prayer. A deep sense of awe came over them all, and the apostles performed many miraculous signs and wonders. And all the believers met together in one place and shared everything they had. They sold their property and possessions and shared the money with those in need. They worshiped together at the Temple each day, met in homes for the Lord’s Supper, and shared their meals with great joy and generosity—all the while praising God and enjoying the goodwill of all the people. And each day the Lord added to their fellowship those who were being saved.

A PURE SEARCH FOR TRUTH

5. Bonhoeffer was not afraid to question things; he was willing to consider both sides of an issue and to think things through rigorously. Eric Metaxas described this as Bonhoeffer’s willingness to engage in a “pure search for truth.” In an emerging Nazi state, this search for truth led him to wrestle with the question, “What is God’s idea of Germany?”

7. When it comes to the role of the church in the political sphere, we tend to err in one of two extremes: by either avoiding political issues altogether or by making political issues a litmus test of faith. How would you describe the dangers of both extremes? As part of your response, consider the potential impact of either approach on people both within and beyond the church.

8. Metaxas suggested that we have to be willing to question things in order to pursue the truth. For Bonhoeffer, this included not merely accepting the traditions and cultural expressions of the German Lutheran church he’d grown up in, but going back to the biblical texts and wrestling with the question, “What is the church?”

9. How would you describe your comfort level when it comes to asking questions about the church that may not have easy answers?

Based on your own church experiences, would you say the Christian community is open to questions and encourages thinking things through rigorously? Or does it tend to avoid exploring questions in favor of explaining answers? 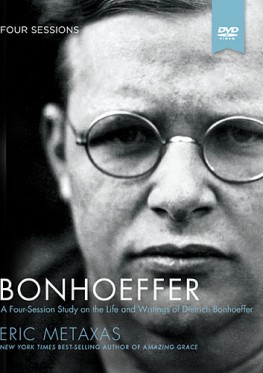 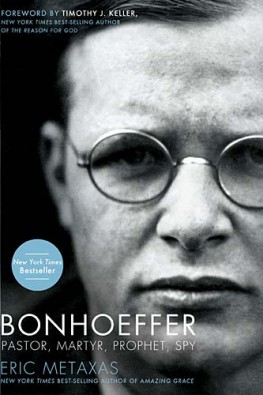 Learn About The Book
Sharing