The Bible teaches us that God “demonstrates his own love for us” (Rom. 5:8) in how he came to us in Jesus. He didn’t expect us to climb up to him. He climbed down to us. He got his hands dirty so that we could have our hearts cleaned. And by that example, he taught us a great deal about God’s character. By studying Jesus’ life, we find hints about God’s heart—and therefore we find hints about how we should go about living our own lives.

It was in a leper colony in India that, finally, I really began to understand Jesus’ incarnation. I’ll never forget standing there at the door of the village with a bag of oranges, trying to persuade the gatekeeper to let me into his leper colony. I was starting to get a little nervous. My friends in India had warned me that this particular village of leprosy victims had a tendency to get a little testy sometimes, and I should enter with extreme caution lest I cause a scene.

This, of course, was why I brought a bag of oranges. My friends had reiterated this advice as if it were just common sense: you take oranges to people with leprosy. “Duh, Johnnie—everyone knows this.”

Apparently, even for people inflicted with leprosy, the stomach is the shortest route to the heart, so there I was, with my oranges, trying my hardest to persuade this man to let me inside.

Before long, I had bargained my way through the gate of the colony and discovered exactly what I had expected. It was something out of a movie reel produced in a different time, when this sort of thing was more commonplace. There were two or three dozen makeshift homes crammed within the small walls of this musty complex, and each shack sheltered a man or woman who looked like they had been plucked right out of the first century. Their open sores were held together by bloodstained bandages, many of their appendages had been sanded down into irritated nubs, and their noses had been ground down to the point that they were almost totally flat—two holes in their faces through which they could barely draw each difficult breath.

Seeing leprosy alive and well was the pinnacle of culture shock for me as a sheltered American college student. It rattled me from the inside out. It was traumatizing. I had no idea that people on planet Earth were still suffering this way, especially in a time when leprosy can be largely eliminated if people are educated enough to know how to get the right treatment as quickly as possible.

The experience was an emotional earthquake. I felt a deep, powerful compassion for these dear people, but if I’m to be totally honest, I was also repelled by their wounds. My heart was broken, but I was also concerned for my own health, and I didn’t give all of myself because I was so afraid I wouldn’t be able to leave the suffering behind when I left that barricaded colony. I don’t like admitting that I wasn’t some prepackaged American version of Mother Teresa who swept in and ignored the bandages and the blood and the smell. I wasn’t that gentle and warm and caring. I was deeply moved—but not moved enough to put my inhibitions aside and “get my hands dirty.” I was afraid there was such a thing as too dirty.

It was uncomfortable to learn that day, bag of oranges in hand in the home of lepers, that I had far less grace than Jesus. I would have never done for those people what Jesus did for me. Jesus didn’t just climb down the stairs to planet Earth to walk around in a leper colony. It was as if he became a leper himself, taking all the pain and putrid sin of history and consuming it in one big gulp on the cross.

Jesus: The King of Kings and Lover of Lepers

The way Jesus himself interacted with leprosy victims is a great illustration of God’s compassion for us.

Actually, Jesus lived in a highly superstitious time, when most people believed that leprosy was the result of a curse or of some incorrigible and hidden sin—not unlike modern Eastern religious systems that teach that your current place in life is the direct result of the karma, or lack thereof, in your previous life. It’s also not unlike the bad advice that Job, the Bible’s iconic figure of suffering, received from his nice, “godly” friends when they barked at him to repent before his sin caused even more problems.

In first-century culture, and especially among the ultrareligious elite, a victim of leprosy was often believed to have been afflicted by God. His disease resulted from some sin, attitude, or choice that deserved just punishment, and one of God’s chief tools for administering such justice was the infliction of this debilitating, humiliating, and miserable disease. It was the application of the age-old law of retribution—bad things happen to bad people.

So anyone—even well-to-do people and sophisticated, religious, respected members of society—unfortunate enough to “catch” this disease would immediately be banished from society, condemned to a life of shame.

Should a leprosy victim ever have to travel back into town, he would have to announce himself as he walked through the streets, hands covering his upper lip: “Unclean, unclean, unclean!” In fact, even in recent history, in some parts of the world lepers have been required to carry a bell to warn others in the streets that they were approaching.

Leprosy, above all things, produced fear—and not the simple startlement of finding a spider crawling across your shoulder. This was incapacitating, panic-inducing fear. If you were walking down a market street with your kids, and you heard the hoarse cry of “unclean” from an approaching leper, you would immediately, without hesitation, drop everything you were doing to get you and your family as far away from the approaching leper as quickly as possible. Most modern people can’t comprehend the kind of terror that leprosy produced.

This cultural context is essential to understanding why Jesus’ interaction with lepers was so absolutely startling, and such a potent demonstration of the length to which God will go to extend grace even to people whom society believes are the least deserving of it.

But then, isn’t that the definition of grace?

Even Jesus’ disciples thought his interaction with lepers was reckless—even dangerous. Yet, almost as quickly as we’re introduced to Jesus in the gospel of Mark, we find him running into a man with leprosy. His reaction is a showstopper. Jesus didn’t run away, turn his head, or try to avoid the diseased man. No doubt the man had yelled “unclean” as he entered the city of Capernaum in a desperate effort to seek out the new rabbi who was rumored to have the powers to heal even leprosy. When Jesus saw the man, the Bible says he was “filled with compassion” (Mark 1:41 NIV). Filled means just that. He was topped off, almost pouring over with compassion. He was moved, as some other translations have put it. When Jesus saw this rejected, isolated, abused, and very sick man, he was immediately moved from somewhere deep inside to care about this man. It was his first and immediate reaction. Most people were immediately repulsed, should they be unfortunate enough to stumble upon a leper. Jesus immediately cared for him. Then Jesus did something absolutely absurd. The Bible says, in Mark 1:41, “Jesus reached out his hand and touched the man” (NIV)

The touch of Jesus was all it took to yank this man out of his misery and re-create his story. Within seconds, the leper’s life course was totally altered one more time. When hopeless situations come face-to-face with Jesus, things change, and this leper’s life was changed forever. Jesus’ touch activated something inside of that man, and it must have produced one massive biological fireworks display. Can you imagine the chemical reaction as that man’s predicament met the power of his Creator? There were probably sparks flying off of his DNA in every direction as twisted things straightened and numb things were resuscitated and life infused death to make something beautiful again out of this man whose days had been numbered. It was the moment where this man’s soul heard the voice of his Creator again, and the miraculous stepped into the inevitable and made a dying man dance.

Jesus was a healer, but he wasn’t just a healer—he was the healer who used his very hands to catalyze his miracles. And we see Jesus doing this all through the Gospels—at least five times in the book of Mark alone. Jesus willingly, frequently touched the men and women others tried to avoid. He not only interacted with these rejected ones. He reached out and touched them.

He wanted, and was willing, to be close to them. That closeness was not the sign of a weak God who meddled with the undeserving, but of a strong God who could heal the sick and perform an even greater miracle: giving dignity back to the despised.

Grace and God’s power are friends, not enemies, of one another. It is not a weak God who associates with weak people, but rather a strong God, attracted to the opportunity to be powerful in their weakness. Grace is hard. It shows not God’s weakness, but his incredible strength. 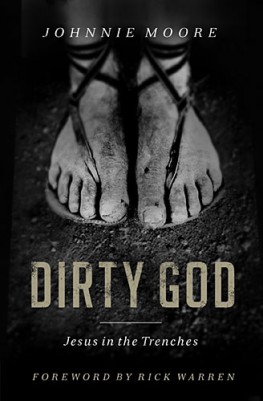