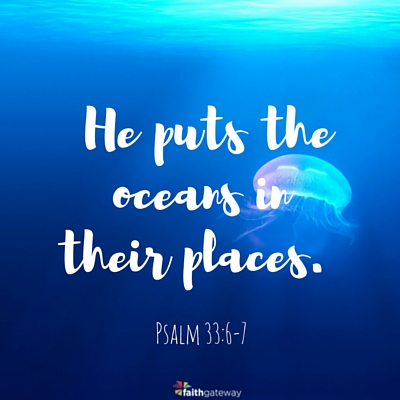 The heavens were made when the Lord commanded it to happen. All the stars were created by the breath of His mouth. He gathers together the waters of the sea. He puts the oceans in their places. — Psalm 33:6-7 (NIRV)

I grew up on Long Island, the largest and longest island in the continental United States. It stretches east-northeast from New York Harbor into the Atlantic Ocean, just below Connecticut and Rhode Island.

My family lived twenty minutes away from the both the north and south shore so we went to the beach as often as most people go to their local park.  Many of my childhood memories include feeling sand between my toes, collecting shells, and playing with horseshoe crabs.

Now I live in New Jersey. Although the drive to the beach is a bit longer, I’m able to share the wonder of the ocean with my children. When summer schedules allow, we jump in the car and head to the Jersey Shore. My kids love to swim in the water and discover the treasures washed ashore just like I did when I was young.

In the Bible it says that God created the oceans on the third day. Then on the fifth day, He filled them with fish and other sea creatures. But did you know that approximately 70% of the Earth’s surface is covered by water and, we have only explored less than five percent of the Earth’s oceans? The animal and plant life we see at the beach is only a glimpse of all that God created.

More fun facts your kids will love include:

I am in awe of the diversity and the uniqueness of God’s creation.  Aren’t you?

Choosing a Bible your kids love is a key element in engaging them in scripture.

So, if your kids, ages 6-10, love the ocean as much as mine do, The Under the Sea Holy Bible, is perfect for them. Underwater fun and playful fish can be found throughout the interior of this delightful children’s Bible. I love that it is written in the New International Readers Version (NIrV) because its short sentences and simple words make it easy for my kids to read and understand. Also, the simple text makes scripture memory a breeze.

What part of God’s creation do you and your kids love best? Join the conversation on the blog!