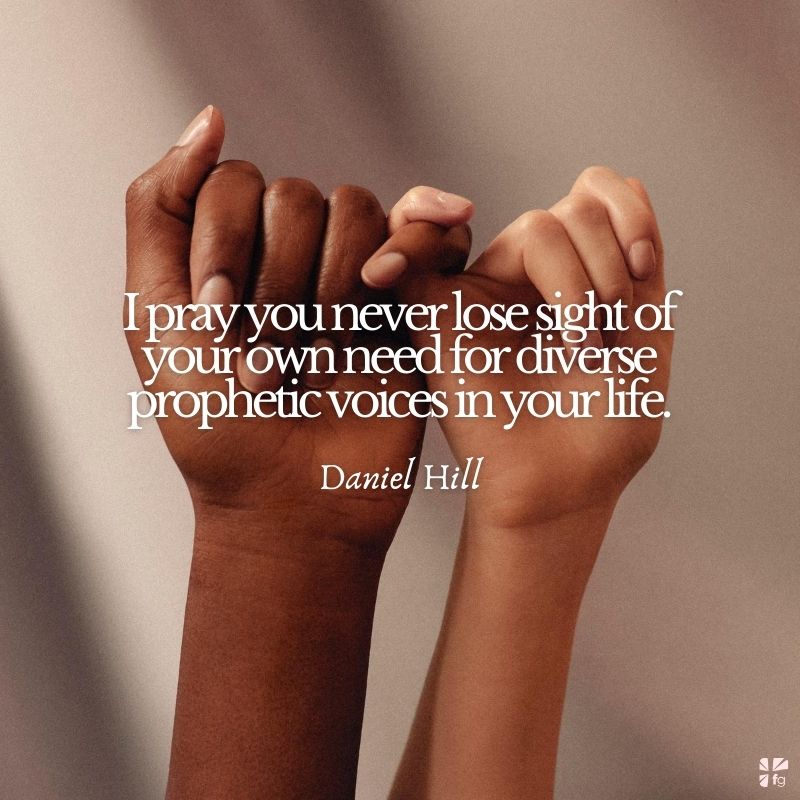 One of the passages that has most profoundly shaped both my understanding of Jesus and my call as a Christian is Colossians 1:15-20:

The Son is the image of the invisible God, the first­ born over all creation. For in Him all things were created: things in Heaven and on earth, visible and invisible, whether thrones or powers or rulers or authorities; all things have been created through Him and for Him. He is before all things, and in Him all things hold together. And He is the head of the Body, the Church; He is the beginning and the firstborn from among the dead, so that in everything He might have the supremacy. For God was pleased to have all His fullness dwell in Him, and through Him to reconcile to Himself all things, whether things on earth or things in Heaven, by making peace through His blood, shed on the Cross.

While there is much truth to draw from this passage, two things stand out in relation to this chapter. First, the apostle Paul reminds us that the ministry of reconciliation is not one that begins with human beings or that even belongs to them. The ministry of reconciliation comes from and belongs to Jesus alone. Jesus is the ultimate reconciler, so this is His work! Second, Paul gives us all of these names of Jesus (image of the invisible God, firstborn over all creation, source of all created things, head of the church) to help clarify His ultimate intention — “so that in everything He might have the supremacy.”

That phrase in particular helps me to remember that race­ related work is rooted in a deeply spiritual struggle.

While the system of race has created all kinds of savage inequalities at the social level, neither its origins nor its sustaining powers are ulti­mately social in nature. This is a spiritual battle. The intention of Jesus Christ is to reign supreme over the entire created order, and in the words of Paul, anything that vies for supremacy — be it visible or invisible — represents an idolatrous throne, power, ruler, or authority that competes with Jesus. That’s one of the many reasons I think it’s important that we continue to use the term White supremacy. Speaking of it like that keeps the spiri­tual nature of this battle in focus and makes it more difficult for followers of Jesus to dismiss race as some type of secondary social problem.

Which leads us back to diversity. One of the primary dangers of worshiping in an all­ White space is that it becomes exceed­ingly difficult to see, name, and respond to the spiritual contest happening between White supremacy and Christ supremacy.

Even if a White congregation wanted to see this more clearly — which they too rarely do — there are few credible resources within White Christian circles that can help with this. Historic voices within Christian circles, particularly those of the conservative persuasion, were either silent on this issue or, worse, outrightly complicit with White supremacy.1 And it barely improves when we fast­-forward to modern times. One needs to do only a basic survey of the preaching catalog of America’s most popular Bible teachers to see how scarcely this spiritual contest is named and taught. And even when race does find its way into the discourse, the conversation rarely goes beyond a true but superficial reminder that acts of racism are bad and that we should instead treat all people equally.

I hope I don’t come across as judgmental or self­-righteous when I make these observations. My motivation is simply to engage in honest dialogue about our need to grow spiritually and the corresponding lack of resources available to us for this jour­ney. I am neither above nor removed from this struggle myself. Like all White people, I pay a dear price when I remain trapped in a White echo chamber for too long.

What is the role of healthy diversity in this first area of see­ing God more clearly? At a bare minimum, diversity reminds us that Jesus designed the church to function as a body with diverse parts and that we need each other if the body is going to work correctly and function in a healthy way. The fact that most of the American church is so badly fractured around race has a tremen­dous impact on our ability to have the image of Christ formed fully in us. What we need is to hear and learn from all parts of the body. A long history of invalidating certain voices and overvalidating others has created a church milieu in which very few White Christians ever get meaningfully exposed to good Bible teaching outside of White, educated, middle ­class males (of which I am one). That inevitably leads to spiritual anemia and erects a barrier in our path to seeing God fully and being formed in the image of Christ.

The need for diversity in the quest to see God more fully goes even further than that. Throughout the Bible we see that one of the best pathways to knowing and loving God comes through the naming and confronting of idols that stand in the way of our devotion to him. Therefore, prophets were raised up by God within each generation to speak against idolatrous worship and to call people to repent and return to the covenantal love of God. The need in our modern world is no different from what the ancient world needed. We need God to send us prophets who can clearly name these competing idols and call us to meaningful repentance.

I believe that White supremacy represents one of the most powerful idols in America’s history.

The White church will have difficulty finding freedom from its grip without a resurgence of this same type of biblical, prophetic witness. Because it is so challenging for White people to see White supremacy clearly, it goes without saying that the prophets we need will come from outside of the White community. When diversity works right, this happens regularly, and the church is different because of it.

But unfortunately, we once again run into the powerful reality of White supremacy. A conversation I had recently with an African American pastor illustrates how quickly the prophetic stream gets undercut by White supremacy. This pastor and I have known each other for a long time, and his story has long served as a source of inspiration to me. His life has been marked by deep episodes of pain, and many of the scars he carries came from the hands of White people. Yet instead of choosing the human instinct to hate, he has experienced a profound call from God to forgive and to seek the ministry of reconciliation. He believes God has called him to be a loving voice for transformation in White communities, and he does it with tremendous grace and kindness.

Sadly, there was a big setback in his reconciliation work. He asked if we could meet and if he could have the freedom to vent in an unfiltered way. He had recently fulfilled the final steps of his ordination process within a large historically White denomi­nation. Both he and the leaders of this denomination repeatedly affirmed his call to be a reconciling voice within their commu­nity. In that spirit, they invited him to speak at their national denominational gathering, and he took them at their word. He preached about the dangers of White supremacy and urged each church represented in attendance to take that caution seriously.

I listened to his talk afterward. It was wonderful. It was biblically sound, filled with grace, and very helpful for moving this denomination forward on its journey. Unfortunately, that’s not how most in attendance felt. Many of them were offended, believing he was insinuating that they were all racists. As a result they flooded the inbox of the denominational leadership with letters and emails. The leadership had initially affirmed the content of his talk, but after the steady flow of complaints, they reversed their position. They responded with an article in the denominational newsletter modifying much of what he said and committing to being more cautious in how they addressed race in the future.

This pastor was devastated. As he processed the pain of hav­ing the leadership reverse course based on public pressure, he said something unforgettable: “I want to believe that reconciliation is possible. I want to believe that a White denomination I have embraced can also embrace me in return. I want to believe that in the same way this denomination embraces the words of White prophetic voices, so too can they embrace the words of Black prophetic voices. But after an experience like this, I wonder if it’s actually possible. Maybe I didn’t hear God right. Maybe the ministry of reconciliation can’t happen when it comes to White supremacy.”

This story illustrates what could happen through diversity, even if it feels just beyond reach. What might have happened had that denomination truly listened and responded to the words of this prophetic voice? The possibility was there to see God in a more robust way, to see sin in a more piercing way, and to respond with meaningful action and bear clearer witness to Christ and His kingdom. When that opportunity fizzled away, it resulted in a loss for everyone. The denomination lost. The pastor lost. The communities in which these churches are located lost.

This is why the practice of diversity is so important, as long as it’s carried out in the right way. I pray you never lose sight of your own need for diverse prophetic voices in your life. I also pray you will be used by God in White spaces, that the people you lead will see the same thing. We must seek out new revelation as to why our communities need this, what they lose if they don’t have it, and what type of infrastructure must be put in place to assure that prophetic voices can be heard.

1.Two of the most influential voices in the development of white Christian theology in America were Jonathan Edwards and George Whitefield. Both, however, had highly problematic his­ tories of complicity with racism. Whitefield, for instance, bought a plantation in North Carolina and became a slave owner as a means to help fund his plans for the ongoing development of his orphanage. Rick Kennedy (“Did George Whitefield Serve Two Masters?” Christianity Today, February 22, 2019, www.christ ianitytoday.com/ct/2019/february­web­only/george­whitefield ­peter­choi­evangelist­god­empire.html) and Jared Wilson (“Was George Whitefield a Christian?” For the Church, May 27, 2019, https://ftc.co/resource­library/blog­entries/was­george­whitefield ­a­christian) both explore Whitefield’s legacy further. Jemar Tisby explores the significance of Jonathan Edwards being a slaveholder in The Color of Compromise (Grand Rapids: Zondervan, 2019, pp. 42–48, 51–52) and expands on its meaning in a Q&A with Daniel José Camacho (“On the Brutal, Violent History of Racism in the U.S. Church,” Sojourners, May 9, 2019, https://sojo.net /articles/brutal­violent­history­racism­us­church).

Listening to a diverse panoply of voices within the Church is important! Race­ related work is rooted in a deeply spiritual struggle which means we have to fight for it! Be willing to listen. Be willing to speak up for diversity! Come share your thoughts with us on our blog. We want to hear from you! ~ Devotionals Daily