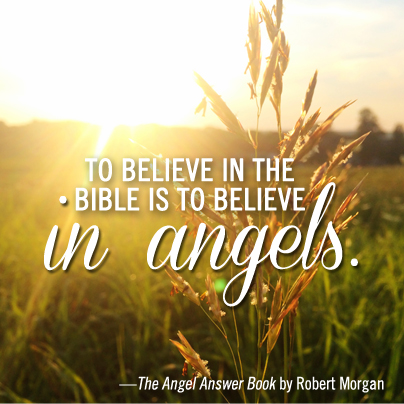 Whether the Lord allows angels to eaves-drop on our prayers, I don’t know. I do believe He frequently employs them in answering prayer: case in point, the prophet Daniel.

As prime minister of Babylon and Persia, Daniel had a lifelong habit of retiring to his private quarters three times a day to spend time talking to the Lord (Daniel 6:10). On one occasion, Daniel had been poring over the writings of the prophet Jeremiah. He came to understand from Jeremiah’s prophecies that the time had come for Israel to return from exile and once again repopulate the promised land. Daniel made this a matter of earnest prayer.

One afternoon, the angel Gabriel showed up during his prayer time.

As soon as you began to pray, Gabriel told him, an answer was given, which I have come to tell you. — Daniel 9:23

Daniel made the request, God bestowed the grace, and an angel brought the answer.

In chapter 10, we have an even more remarkable story. Daniel was given a graphic vision by direct revelation from God. Deeply troubled, Daniel prayed earnestly to understand the vision. Three weeks passed. One day Daniel accompanied some men who were inspecting the banks of the Tigris River. Looking up, he saw a man dressed in linen with a belt of gold around his waist. His body was like topaz, his face like lightning, his eyes on fire. His arms and legs resembled burnished bronze that flashed in the sunshine. His voice was like the roar of a stadium.

The sudden appearance of this spectacular stranger drained the strength from Daniel’s body like air from a balloon, and he collapsed. At once an angel stood beside him, touched him, and helped him to his hands and knees and gradually to his feet. The next words we read fill us with wonder. The angel said:

Don’t be afraid, Daniel. Since the first day you began to pray for understanding and to humble yourself before your God, your request has been heard in heaven. I have come in answer to your prayer. But for twenty-one days the spirit prince of the kingdom of Persia blocked my way. Then Michael, one of the archangels, came to help me, and I left him there with the spirit prince of the kingdom of Persia. Now I am here to explain what will happen to your people in the future. — Daniel 10:12-14

No further explanation is given, but taken at face value, it appears that at the moment Daniel began praying, the answer was issued without delay, just as in the previous chapter. But powerful demonic forces had blocked the pathway of the angel bearing the answer. The impasse lasted a full three weeks until the archangel Michael arrived on the scene with his superior authority. The standoff was ended, and the delayed angel sped on to Daniel with the answer to his prayer.

Watch the Video for The Angel Answer Book

Do you believe in angels? Do you believe that they are sent by God to intervene on our behalf? Have you ever experience angelic help that you were aware of? Come join the conversation on our blog! We would love to hear your comments about angels in our midst!