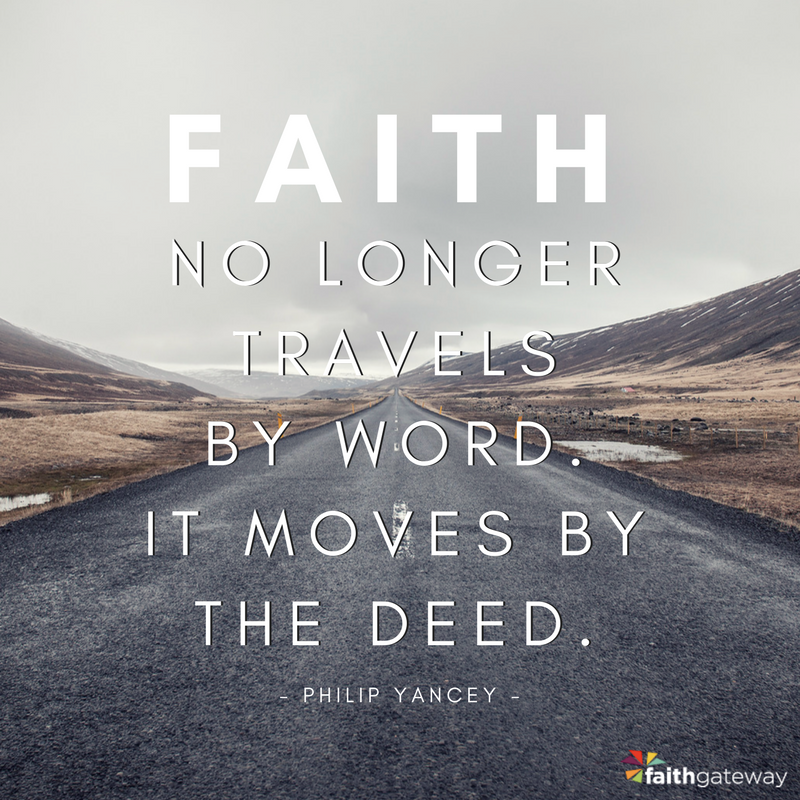 The apostle Paul said about a healthy community, “If one part suffers, every part suffers with it; if one part is honored, every part rejoices with it.” The Christian community, known worldwide by the symbol of a cross and by our regular partaking of a sacrament “in remembrance of Me,” should be able to make a unique contribution to those who suffer. Alas, as I have heard repeatedly, all too often “the church made it worse.”

When the Indonesian tsunami killed a quarter-million people on a sunny day in 2004, geologists blamed it on the rupture of an undersea mega-thrust on the sea floor, triggering the giant wave. Some televangelists credited it instead to God’s wrath against “pagan” nations in that region that had been persecuting Christians. Along the same line, one Christian leader traced the cause of the 2011 Japanese tsunami to the fact that “Japan is under control of the sun goddess.” When terrorists killed three thousand people by crashing airplanes into the World Trade Center, a prominent fundamentalist in Virginia blamed it on “the pagans and the abortionists and the feminists and the gays and the lesbians who are actively trying to make that an alternative lifestyle, the ACLU, People for the American Way… I point the thing in their face and say, you helped this happen.”

When twenty children and six staff died at the hands of a shooter in Newtown, a well-known radio personality attributed it to God who has “allowed judgment to fall upon us” for accepting things like abortion and gay marriage. Another radio pastor/politician said that God “chose not to stop the slaughter of these young innocents” because “we are keeping God out of schools.”

Such extreme statements by self-appointed spokespersons get widespread press coverage. And after any major disaster you can go on the Internet and read a wide variety of theological justifications, all attempting — like Job’s friends? — to explain what happened as an expression of God’s plan. (“Consider now,” Eliphaz urged Job, “Who, being innocent, has ever perished? Where were the upright ever destroyed?” — unaware at that point that he was participating in a drama of refutation.) Theories ascribing disasters to God’s judgment end up sounding more like karma than providence.

Why do we continue to think that good and evil, pain and pleasure, are doled out according to our merit when the Book of Job teaches just the opposite?

Committed Calvinists strain to explain catastrophes, along with everything else, as an expression of God’s sovereign will. I follow their arguments with some sympathy, yet wonder why Jesus never used such reasoning with the suffering people He encountered. Never do I see Jesus lecturing people on the need to accept blindness or lameness as an expression of God’s secret will; rather, He healed them. He taught us to pray, “Your will be done, on earth as it is in Heaven,” and directed us to work diligently toward that goal. Since we anticipate no wars, gun violence, terrorist acts, or natural disasters in Heaven — indeed, no tears or death — I choose to speak of God’s desire for humans on earth, leaving the intricacies of “God’s will” to the theologians. The aftermath of a catastrophe is probably the worst time to quote, “God is on the throne.”

Words, no matter how well-intentioned, may heap more pain on an already sad situation.

“There must be a reason,” we say when a family loses a job and sees their house go into foreclosure — yes, but what reason makes sense at such a time? “God doesn’t put on us more than we can bear” sounds hollow to someone at the breaking point. Kevin Costner’s movie The War includes a scene with another spiritual cliché. After a Vietnam veteran dies in a mining accident trying to save a friend’s life, his wife tries to comfort their son. “God needed him home,” she says. The son yells to sky: “Yeah, but I need him more than you do!” I prefer (and think more theologically correct) the reaction of the pastor at the funeral in Chicago, “Damn you, death!” If we are upset about the condition of this planet, I can only imagine how God feels.

Even a spiritual truth like “All things work together for good” can hit like a hammer blow if presented at the wrong time. Those who speak of suffering producing a greater good offer scant solace to ordinary people grieving their losses and wondering how to resume life. An angry woman recently wrote me about the “hijacking” of her mother’s funeral: “There were the missionaries who came up to me right after the service to tell me with a smile that ‘if one person accepted Christ during the service, then your mother’s death was worth it.’”

After the fertilizer plant explosion in Texas, CNN interviewed a woman who survived the collapse of her nursing home. “I thank my guardian angels,” she said, an understandable sentiment. I could not help wondering, though, how that comment sounded to the families of those who had not survived. Then I came across the story of Joe Berti, who crossed the finish line of the Boston Marathon just seconds before the first bomb went off. After several frantic hours trying to reunite with his family in the confusion, he flew home to Texas, where two days later on a business trip he witnessed the explosion of the fertilizer factory, a blast that rocked his car and rained debris around him. Some called him the unluckiest man alive; some called him the luckiest. Berti’s wife had a wise and balanced reaction. “We’re grateful that God has been merciful to us,” she said. “We are just praying for the people who were so much less fortunate than we were.”

After spending time in Japan and Newtown, I have adopted a two-part test I keep in mind before offering counsel to a suffering person. First, I ask myself how these words would sound to a mother who kissed her daughter goodbye as she put her on the school bus and then later that day was called to identify her bloody body. Would my words bring comfort or compound the pain? Then I ask myself what Jesus would say to that mother. Few theological explanations pass those tests. The only way I know to respond with comfort and healing, as Jesus did, is to fully embrace the mother’s grief and to assure her that God feels more grieved than she does. In the words of David Bentley Hart, who is a theologian, “When I see the death of a child, I do not see the face of God but the face of His enemy… and that rather than showing us how the tears of a small girl suffering in the dark were necessary for the building of the Kingdom, He will instead raise her up and wipe away all tears from her eyes.”

In sum, I avoid trying to answer the Why? question because any attempt will inevitably fall short and may even rub salt in an open wound. As Jesus’ followers, we can instead offer a loving and sympathetic presence that may help bind wounds and heal a broken heart. Thankfully, I have seen the church do just that. I went to Newtown at the invitation of a church that sent four counselors to the firehouse where anxious parents awaited news of their children’s fate and that has raised a large sum of money to provide ongoing counseling for the families. Since the tragedy, six mothers of slain children have begun participating in regular gatherings at that church, one of many that reached out to them.

In Japan I met teams from the Philippines, Germany, Singapore, and the U.S. involved in reconstruction. Organizations such as Habitat for Humanity and Samaritan’s Purse mobilized immediately after the earthquake and a year later were still sending crews to aid in recovery. Although the church in Japan represents only one percent of the population, Christian organizations took a lead in rebuilding efforts, and some Japanese churches became distribution centers for food and supplies. One church sheltered more than a thousand evacuees the first few months after the tsunami.

I met some of the retired contractors and construction workers who had signed on with Samaritan’s Purse to rebuild houses swept away by the tsunami. They were living in cramped communal housing and working long hours without pay. “We don’t proselytize,” one told me. “We don’t need to — the people know why we’re here. We’re simply followers of Jesus trying to live out His commands. Just before handing owners the key to their new home, we ask if we can pray a blessing on the house. So far no one has turned us down.” As a counterbalance to the list of seven deadly sins, the church in the Middle Ages came up with a list of seven works of mercy: to feed the hungry, give drink to the thirsty, clothe the naked, house the homeless, visit the sick, ransom the captive, bury the dead. Every day a small army of relief workers and volunteers in Tohoku put into practice those works of mercy. Not all of us can serve on the front lines of mercy, however.

As I reminded the staff of my publisher in Tokyo the day I left, the church later came up with an additional list of spiritual works of mercy: to instruct the ignorant, counsel the doubtful, admonish sinners, bear wrongs patiently, forgive offences willingly, comfort the afflicted, pray for the living and the dead. The church in Japan, a tiny minority in a distressed nation, is endeavoring to practice those less-visible works as well. John Marks, a producer for television’s 60 Minutes, went on a two-year quest to investigate evangelicals, the group he had grown up among and later rejected. He wrote a book about the quest called Reasons to Believe: One Man’s Journey Among the Evangelicals and the Faith He Left Behind. The church’s response to Hurricane Katrina turned the corner for him and became a key reason to believe. One Baptist church in Baton Rouge fed 16,000 people a day for weeks; another housed 700 homeless evacuees. Years after the hurricane, and long after federal assistance had dried up, a network of churches in surrounding states was still sending regular teams to help rebuild houses. Most impressively to Marks, all these church efforts crossed racial lines and barriers in the Deep South. As one worker told him, “We had whites, blacks, Hispanics, Vietnamese, good old Cajun… We just tried to say, ‘hey, let’s help people. This is our state. We’ll let everybody else sort out that other stuff. We’ve got to cook some rice.’”

I would argue that this was a watershed moment in the history of American Christianity… nothing spoke more eloquently to believers, and to nonbelievers who were paying attention, than the success of a population of believing volunteers measured against the massive and near-total collapse of secular government efforts. The storm laid bare an unmistakable truth.

More and more Christians have decided that the only way to reconquer America is through service.

The faith no longer travels by the word. It moves by the deed.

Excerpted with permission from The Question That Never Goes Away by Philip Yancey, copyright Philip Yancey and SCCT.

In the aftermath of disasters, we believers can help. Our prayers do move mountains so we should pray. But, our actions are the hands and feet of Jesus to the world in need. What can you do today to be of help? Pray. Donate. Go? Come share with us on our blog. We want to hear your stories of hope in the face of tragedy. ~ Devotionals Daily