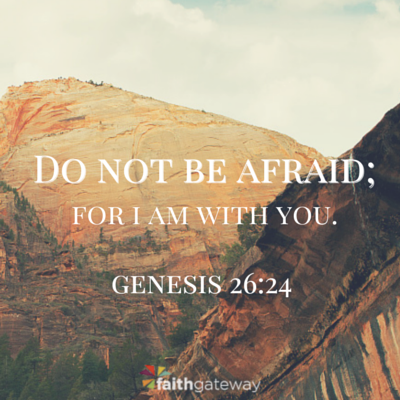 Courage is resistance to fear, mastery of fear, not absence of fear. – Mark Twain

Brian is an incredibly smart, strong, and confident individual. With a decade of tenure at his company, a robust staff, and the experience and knowledge to substantiate his value to the organization, Brian seemingly had nothing to fear. He was next in line for the executive suite. On the outside looking in, you would assume that Brian was completely confident.

He knew how to create a polished exterior that projected self-assurance. Brian and I worked down the hall from each other. It never occurred to me to ask him if he ever wrestled with fear until the day he was handed the pink slip and ushered out the door. In a struggling economy, the company he was loyal to couldn’t be loyal to him.

Over lunch a few weeks later, I probed a bit: “Did you see this coming?” His response was casual but measured: “I always feared it could happen. Not because I wasn’t performing but because I’ve always lived with a fear that I’m not enough. I’ve always had an underlying fear that someday I wouldn’t be enough. I would make one too many mistakes. I’d miss an important detail. But I didn’t expect to be dismissed this way. It makes me question, why wasn’t I valuable enough to keep?”

Brian’s fears and questions are significant. They represent an underlying tension that challenges our clout every day. Am I enough?

The question is overwhelming because of the numerous fears that underlie it. Our fears are so diverse and so extreme that we’re more apt to avoid and ignore them rather than acknowledge that they’re there.

We fear not being strong enough, so we cover it up with pride. We fear not measuring up to others, so we wrestle with comparison. We fear chaos, so we grapple for control. This fear that we can’t handle it, that we’re not enough, rings true in each of these enemies that impact our influence. What we’ll discover is that our greatest fear is true, but there is an even greater truth to replace it.

Do Not Be Afraid

You don’t have to be afraid. Easier said than done, right? Again and again in the Bible God told His children not to be afraid.

Through a vision, God said,

Do not be afraid, Abram. I am your shield, your very great reward. – Genesis 15:1

When Hagar and her son Ishmael were banished from Abraham’s land, an angel told Hagar,

When Jacob was fearful of traveling in his old age, God told him,

Do not be afraid to go down to Egypt, for I will make you into a great nation. – Genesis 46:3

Numerous times Moses reminded the Israelites not to be afraid because God was with them and would fight for them. And after Moses’ death, God made the same commitment to Joshua as he encouraged him to be strong and courageous:

Do not be afraid; do not be discouraged, for the Lord your God will be with you wherever you go. – Joshua 1:9

From David to Elijah, from Isaiah to Jeremiah, God continuously reminded his people not to fear. When Joseph considered canceling his engagement to Mary, an angel appeared to him, telling him not to be afraid (Matthew 1:19-20). When Jesus charged the twelve disciples with their responsibility, He told them not to be afraid of those who would seek to harm them for proclaiming the truth (Matthew 10:26-28). From the women gathering at the empty tomb to the disciples seeing the resurrected Jesus, the message was the same: do not be afraid (Matthew 28:5, Matthew 28:10).

In every instance, people faced legitimate fears. But each time God’s message remained consistent. It seems God understood that we would wrestle with fear.

Do not be afraid! What fears do you feel you can’t handle? Take a few minutes and write them down. What truth from Scripture confronts that fear? Review the promises that God made to His people in Scripture when they were afraid. Which one of these promises do you need to remember?

Join the conversation on our blog! We would love to hear about what fears in your life in which God is commanding you to not be afraid! ~ Devotionals Daily