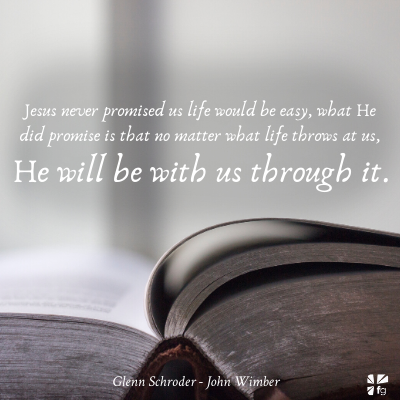 When I first met John Wimber, I was nineteen. I had been a believer for about five years, but I had virtually no understanding of the concept that I could be actually be involved in Kingdom ministry. Ephesians 4:11-2 had somehow slipped right past me. My concept of Christian living was to be good person, pray, read the Bible, go to church on Sunday, and do my best to stay relatively free from sin, or at least the really nasty kind.

John transformed my thinking and my practical expression of Christianity. He was always talking about “doin’ the stuff” — how we all are called by God to care for the poor, pray for the sick, love the lost and lonely, and engage in all kinds of Kingdom activity. This was revolutionary for me and changed the direction of my life. Up to that time, I had intended to teach high school English. However, after hanging around John and the Vineyard for a couple of years, I got the bug — the Kingdom ministry bug. I understood that we all are called to do the stuff, regardless of our occupations. But following several ministry trips with John, I sensed God was calling me to more. My wife, Donna, and I began attending the Vineyard Institute for Ministry, which in turn led to an internship and eventually being hired as the youth pastors of the Anaheim Vineyard (John’s church).

We served on staff with John for thirteen years and learned many invaluable life lessons as well as an approach to ministry that has sustained us to this day. We’ve now been in ministry a total of thirty-six years. It hasn’t always been easy. Ministry can be a tiring and often lonely life. One of the things I remember John saying is:

Jesus never promised us life would be easy, what He did promise is that no matter what life throws at us, He will be with us through it.

Those words have sustained me many times. He was right! It has at times been hard, but I can honestly say that I have known God’s presence even in the most challenging circumstances.

John lived ministry. He was the epitome of “the man being the message.” His core message, one that inspired thousands of people to “do the stuff” was that God is no respecter of persons. That He isn’t looking for the educated, the qualified, the gifted; He is looking for the available. In his own humble, often self-deprecating, way, John embodied the notion that every believer is called to be an active participant and that Christianity really is not a spectator sport. I was but one of thousands of young people John taught to engage in ministry with his simple show-and-tell method. He would talk about the Kingdom, demonstrate ministry, and then provide the opportunity for everyone to participate.

One of my most profound ministry memories is of the ministry time during a healing conference at the Anaheim Vineyard. John had a word of knowledge for someone suffering from migraine headaches. He began his typical clinic time, inviting others to share words of knowledge, calling people forward for prayer, and releasing trained ministry teams to pray. I was on the ministry team that night. (This was in the very early eighties before I was on staff with John.) After a few minutes John asked, “Has the person with the migraines come forward?” When no one responded, he said, “You’ve been suffering from migraines for seventeen years, and God wants your headaches.” Ministry continued a while longer.

John asked again, “Did the person with the migraines come for prayer yet?” Again, no response. This time John did something I rarely heard him do. He said, “You’ve had migraines for seventeen years, and your name is George.”

As ministry continued, I approached a man who had come forward for prayer. I introduced myself and asked, “What would you like prayer for?” He responded, “I’m George.”

Admittedly, I was a little intimidated at this point but determined to do my job. As we prayed, I could sense God’s healing presence on George. The Holy Spirit was clearly ministering to him. In the aftermath, George was healed. His migraines, which he had suffered from for seventeen years, stopped. He began attending our church regularly. Later he confessed to me that he had been a skeptic of healing ministry and had come that night just to “see the show” and confirm for himself that it really was all a sham.

John Wimber was faithful, obedient, and tenacious. These are life lessons I learned from him that have served me well. I hope they serve you too.

Written for Devotionals Daily by Glenn Schroder, author of Never Trust a Leader Without a Limp.

Kingdom ministry isn’t for the super-holy or the special. It’s for all of us. All of us are called to “do the stuff” of the Kingdom of God! It’s not a sham! Come share your thoughts with us on our blog. We want to hear from you about being available to Jesus! ~ Devotionals Daily