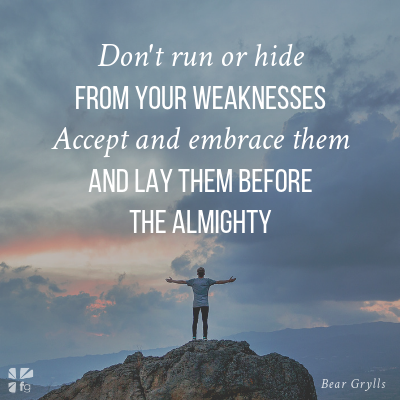 Editor’s note: Bear Grylls is a survivor. You’ve likely seen him on one of his many survival and adventure TV shows, such as Man Vs. Wild, You Vs. Wild, The Island, and Running Wild with Bear Grylls. In his life, Bear has served with British special forces, climbed Everest, crossed the north Atlantic unassisted, and he currently holds the record for the longest indoor freefall! But as much as Bear knows about adventure and survival, he’s come to realize that a deeper source of strength is needed in this life. As Bear says, “I find the journey hard. I often mess up. I feel myself teetering on the edge more often than you would imagine. So for me, starting my day with God really helps. It is like food. Like good fuel for the soul.” In his new book Soul Fuel, Bear Grylls offers up 365 devotions, many of which he wrote on his phone during his countless adventures. Enjoy two selections today from Bear in Soul Fuel.

Listen to an Audioclip: Soul Fuel by Bear Grylls

I often feel inadequate because of my many weaknesses. But sometimes God works through our weaknesses better than through our perceived strengths.

We see it in Gideon. Chosen by God to lead an army, he didn’t feel that he was up to the job.

“Pardon me, my lord,” Gideon replied, “but how can I save Israel? My clan is the weakest in Manasseh, and I am the least in my family”. — Judges 6:15

Often our doubts and fears only really surface when we’re about to be tested. But our sense of weakness is no barrier to God. “I will be with you,” said God to Gideon. And He says it to us too.

I often draw strength from the words of the apostle Paul:

Therefore I will boast all the more gladly about my weaknesses, so that Christ’s power may rest on me… For when I am weak, then I am strong. —2 Corinthians 12:9-10

Don’t run or hide from your weaknesses. Accept and embrace them, and lay them before the Almighty. He longs to enter, transform, and empower our lives. It is what He does — but only when asked, and only when there is room for Him to work.

A false sense of self-confidence often gets in the way of our progress in life. There’s a power to weakness, strange as it sounds. But when we admit that we’re unable to fight the big battles alone, that is when we learn to effectively rely on a stronger power. God-confidence is always going to win over self-confidence. Gideon knew that, as have so many of the most empowered men and women throughout history.

The Curtain Between Man and God

It is arguably the most poignant moment in human history: Pilate turned and looked at Jesus. Covered in blood, a crown of thorns biting into His scalp, soldiers on either side, Jesus didn’t look like much of a threat to the Roman ruler. I imagine Pilot half sneering, half despairing as he spoke:

Don’t you realize I have power either to free you or to crucify you? — John 19:10

But Jesus’ reply was so calm and clear:

You haven’t a shred of authority over Me except what has been given you from Heaven. — John 19:11 MSG

It must have looked to many as though it was game over, as though Jesus’ life had been a failure — that hatred, jealousy, and ego had conquered over mercy, forgiveness, and love. But in reality, the greatest victory in the history of the world was about to be won. The conquered one, the man who looked as if He’d failed, was about to reveal a source of new life, a new vision for humankind, a new road to peace and unity.

At that moment, the Temple curtain was ripped in two, top to bottom. There was an earthquake, and rocks were split in pieces. — Matthew 27:51 MSG

Whenever we’re struggling with the circumstances of our lives, let’s see beyond what other people see as failure and look instead to what God’s doing behind the scenes in our lives. Let’s choose to remember that the greatest triumphs sometimes occur when the circumstances seem to be hardest.

When we think life is dark, Christ knows better. Look up. The light is coming.

How have you seen God’s strength shown in your weaknesses? How has He been with you during dark times? We’d love to hear your thoughts in the comments!