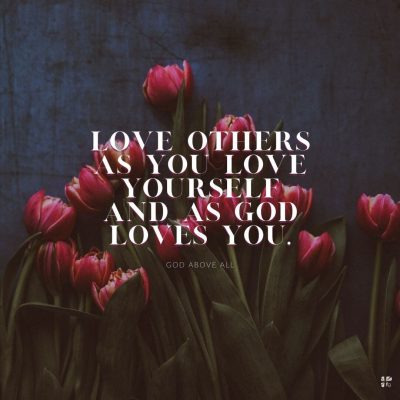 Why rage against bad people? “Because they’re bad,” you say. You add yourself to their number by raging against them. Let me give you some advice: Are you being bothered by a bad person? Don’t make there be two of you. By condemning the person, you join them. You increase the number under judgment. You want to defeat bad with bad and conquer evil with evil?… Have you not heard the Lord’s advice: “Do not be overcome by evil, but overcome evil with good”? ~  St. Augustine, Sermon 302, Trans. S. Watts.

Forest fires are harrowing. They move at high speed, consuming everything in their paths. One minute they are miles away. The next, they are at your doorstep. Sometimes, when conditions are severe enough, two enormous fires can join together in a single conflagration. But rather than burn themselves out, they only grow in ferocity. One can only pray for rain.

We sometimes talk about fighting fire with fire. But most of the time, such as in those great furnaces that burn through bush and forest, this just amounts to a bigger fire.

Augustine talks about anger and condemnation in the same way.

Responding to evil with evil only magnifies what was already a terrible situation. It only causes more devastation.

Christians, Augustine makes clear, are not to fight fire with fire. They are not to fight evil with evil. They know another way. As the apostle Paul teaches, only good can conquer evil (Romans 12:17-21). For example, Jesus died for His enemies — He did not kill them. This may be a frustrating message. If there is injustice, we want to lash out. We must, instead, trust the way of our Savior.

Words and actions wound all of us. Think of arguments you’ve had. How did you respond? Did you fight fire with fire? Did you seek reconciliation? Ask God to redeem it all. Ask Him to prepare your heart for the disagreements to come. May you be one who heals as He heals, not one who wounds. May He grant you His patience and His grace.

The Right Kind of Pride

Humility is especially recommended to the people of the city of God while they journey in the world… The humble city is comprised of holy people and good angels, the prideful city of wicked people and evil angels. The former is guided and fashioned by the love of God, the latter by the love of self. ~ City of God, 14.13, trans. M. DODs.

It is not wrong to take pride in yourself, your community, and your work. Taking pride in these areas shows they are worthy of respect. They are valuable and worth investing in. Further, such pride reflects the dignity our Creator has given to all He has made. This is not the pride Augustine is talking about.

What Augustine is talking about, however, is the pride that refuses to apologize and treats other people as being somehow unworthy of respect. It produces entitlement, a lack of accountability, and an unquenchable thirst for other people’s praise. This is the pride that belongs to the city of men. It is disordered and destined for destruction. It is the devil’s work — the very same who, as the poet John Milton put it, would rather rule in hell than serve in heaven.

But what are we to do in the face of this pride? Should we fight fire with fire? Treat the prideful with the same lack of respect they show to us? No. Augustine shows us another way — the way of Jesus, the way of the heavenly city.

Contemplate what it means to be truly humble, just as Jesus was truly humble. Remind yourself that this does not mean self-loathing, a willingness to be taken advantage of, or just another opportunity to win approval. It is simply not caring about whether the watching world rightfully praises or wrongly blames you. Ask God to help you realign your priorities. Seek His praise alone.

Love others as you love yourself and as God loves you.

Excerpted with permission from God Above All, copyright Zondervan.

Anger at others can set the whole world on fire. As we’ve seen, it can cause more damage than anyone could have imagined. As Christians, we have to put down our pride and love as we are loved. God will redeem for us what He will redeem! ~ Devotionals Daily