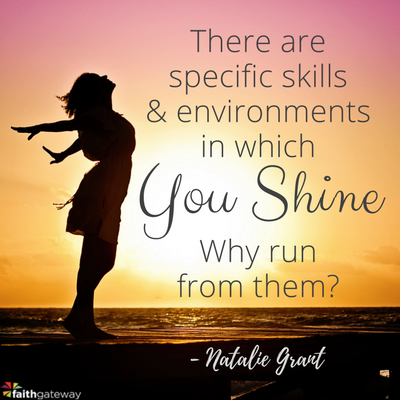 Vocally, if you try to force yourself to be someone you’re not, there’s a very real chance that you could seriously injure your vocal cords or even lose your voice permanently. When you try to manipulate God’s handiwork, the outcomes are typically not so great.

For example, let’s say that you are great with people one-on-one. Don’t feel badly or less than if you’re not teaching a class or leading worship. Likewise, if you thrive in a professional environment, there’s no need to feel guilt or shame if you don’t leave the professional sphere to homeschool.

Abraham and Sarah didn’t have the advantage of perspective that we have as we read their story. Unable to step back and see a bigger picture, both harbored considerable doubts about God’s promise. Even in their unbelief, however, God was relentless in His pursuit of Abraham as the father of many nations.

When Abram was ninety-nine years old, the Lord appeared to him and said, “I am God Almighty; walk before Me faithfully and be blameless. Then I will make My covenant between Me and you and will greatly increase your numbers.”

Abram fell facedown, and God said to him, “As for Me, this is My covenant with you: You will be the father of many nations. No longer will you be called Abram; your name will be Abraham, for I have made you a father of many nations. I will make you very fruitful; I will make nations of you, and kings will come from you. I will establish my covenant as an everlasting covenant between Me and you and your descendants after you for the generations to come, to be your God and the God of your descendants after you.”

… God also said to Abraham… “I will bless [your wife] and will surely give you a son by her. I will bless her so that she will be the mother of nations; kings of peoples will come from her.”

I had my children in my thirties, and surrendering my family planning to God was one of the hardest things I’ve ever had to do.

I’ll never forget the moment I got the call. I was backstage getting ready to perform with Wynonna Judd in Nashville’s Ryman auditorium — a lifetime achievement and dream for any music artist — but I wasn’t going to ignore a call from my doctor’s office. My husband Bernie and I had put off the idea of starting a family for the first five years of marriage, because our careers and travel schedule were so demanding. But we were finally ready. We dreamed about the little boy or girl we couldn’t wait to welcome into our family.

“We have your tests back,” the nurse said, and I held my breath. “I’m sorry to tell you this, but the results show you and your husband have less than a 3 percent chance of conceiving a child.” I was devastated. I wanted to go home — to hide, to scream and cry — anything but get out there in the spotlight just when I was feeling at my most helpless, my most vulnerable.

After much prayer and advice from our doctors, Bernie and I decided to pursue fertility treatments. Many tests and shots and doctor’s appointments later, the sonogram revealed not one, but two heartbeats! Bella and Gracie became our miracle girls — healthy, beautiful, more than we’d ever asked for.

But God wasn’t quite finished with His surprises. Just when our lives were settling back into normalcy, when the twins were three, I discovered there was another miracle baby. This one had come about with no tests, no fertility treatments. And I’ll be honest — I hadn’t asked for this miracle; we certainly hadn’t tried for it, and I was scared. Scared of how this was going to stretch us beyond capacity when our lives were already so full.

Welcome Sadie, our miracle girl number three. She brings us joy in ways we never thought possible. She is more than we’d ever asked for, and that is an incredible gift.

Navigating all of this in my thirties was difficult, especially when I had no idea what God had up His sleeve. I cannot fathom a ninety-year-old woman giving birth. Neither could Abraham. But God wasn’t through with Abraham yet.

Not long after the above conversation, Abraham had three visitors, one of whom was the Lord. Abraham asked servants to prepare food. In the meantime, Abraham returned to the tent where the visitors were waiting and the following conversation took place:

“Where is your wife Sarah?” they asked him. “There, in the tent,” he said. Then one of them said, “I will surely return to you about this time next year, and Sarah your wife will have a son.”

Now Sarah was listening at the entrance to the tent, which was behind Him. Abraham and Sarah were already very old, and Sarah was past the age of childbearing. So Sarah laughed to herself as she thought, “After I am worn out and my lord is old, will I now have this pleasure?”

Then the Lord said to Abraham, “Why did Sarah laugh and say, ‘Will I really have a child, now that I am old?’ Is anything too hard for the Lord? I will return to you at the appointed time next year, and Sarah will have a son.”

Sarah was afraid, so she lied and said, “I did not laugh.”

I used to think Sarah was insane for having the audacity to laugh at something the Lord had said… and then lie about it. Now, however, I realize that my perspective is one that developed thousands of years after the fact. I know all about Isaac and the nation of Israel. I have an Old Testament and a New Testament full of miraculous signs and events. I’ve got history on my side.

Sarah had none of that. Here was a post-menopausal woman with a hundred-year-old husband, who had been barren her entire life. Of course, it seems ridiculous to suggest she might have a baby. According to the rules of culture and the physiological limitations that exist in nature, pregnancy is virtually impossible.

Had I been there, I would have probably had a laugh with her.

And had I been caught laughing, I probably would have lied about it too. It must have been terrifying to be called out by God.

Now the Lord was gracious to Sarah as He had said, and the Lord did for Sarah what He had promised. Sarah became pregnant and bore a son to Abraham in his old age, at the very time God had promised him. Abraham gave the name Isaac to the son Sarah bore him. When his son Isaac was eight days old, Abraham circumcised him, as God commanded him. Abraham was a hundred years old when his son Isaac was born to him.

Sarah said, “God has brought me laughter, and everyone who hears about this will laugh with me.” And she added, “Who would have said to Abraham that Sarah would nurse children? Yet I have borne him a son in his old age.” (Genesis 21:1–7)

I like to think God cracked a smile when this beautiful story came full-circle — from Sarah’s laughter over the prospect of a child to a child whose name, Isaac, literally means laughter. Isn’t it just like Him to bookend this story with a smile? He didn’t berate them for their doubt. He didn’t call Sarah out. He gave her joy. He worked His plan exactly as He said He would.

God knew that Abraham and Sarah were going to be the parents of His nation… Israel.

He didn’t choose them by happenstance. Nor did He choose incorrectly. He knew what the range of Abraham’s and Sarah’s lives would entail. It just took them a while to catch up.

So what does all of this mean in the real world? In your world?

I’m going to go out on a limb and guess that God has shown or suggested to you what He wants you to do in life. If not, maybe it’s because you’re not ready to hear it or won’t slow down enough to listen.

If you’ve spent your life comparing yourself to others or dreaming that you could be somewhere or someone different, it’s time to stop wasting time! Comparisons are dangerous. You’ll always find something about yourself that doesn’t measure up. And if you dwell on these things, you’ll start idolizing and pursuing things other than God and His plan. If your focus is a certain salary, a certain clothing size or a certain pedigree, you’re not going to have time or room in your life to consider what God wants from your life.

Sarah’s story shows us you can’t decide what your range — your thrive zone — is on your terms and pursue God’s plan for you at the same time. It’s simply not possible.

When that happens, you’re missing out on more than you could ever dream for your life. God has created in each of us a distinct and unique tessitura — the sweet spot in which we shine. This range is not on our own terms. We can’t force it without straining and causing damage to our heart, our relationships, our voice.

God’s “zone” for Sarah, just as it is with us, was far and away better than anything she or we could have come up with. She forced her way to what she wanted, and it turned into a hot mess. But God’s tessitura for Sarah turned out to lead to a miracle.

Your range is special and unique. Your thrive zone is where you thrive!

There are specific skills and environments in which you shine. Why run from them?

Not to mention, in a sense, you’re telling God that what He created isn’t good enough. You’re laughing at His plan. Obviously, our resistance isn’t going to throw off God’s ultimate plan. His will shall come to pass. Whether you are a part of it is really your decision.

What does it mean to you that God has a “thrive zone” specifically for you? Where do you feel like you are today in finding your own unique, God-given voice? We’d love to hear from you in the comments!